Thomas Philippon, a professor at NYU. In his new book, ‘The Great Reversal: How America Gave Up On Free Markets,’ he concludes that competition in the U.S. has declined to the detriment of consumers


PARTAGER What France—Yes, France—Can Teach the U.S. About Free Markets

From cellphones to airfares, competition has risen in Europe but shrunk in America

When Thomas Philippon moved to the U.S. in 1999 to pursue graduate studies, he found internet service, cellphone plans and airfares all cost less than in his native France. Two decades later, he observes, they are cheaper not just in France but throughout Europe and Asia.

What happened in those 20 years is a fascinating case study of rising corporate concentration and why this reflects not just impersonal economic forces but political choices. They’re the subject of a book by Mr. Philippon, a New York University economist, to be published next month by Harvard University Press: “The Great Reversal: How America Gave Up On Free Markets.”

The U.S. is in the midst of an intensifying debate over monopoly power, with Democrats calling for much tougher antitrust enforcement and Republicans joining them in accusing big tech companies of abusing their market dominance. A growing mountain of research has focused on corporate concentration in the U.S.

Mr. Philippon reviews much of this evidence and concludes competition has indeed declined to the detriment of consumers. His novel contribution, though, is to contrast this with the experience of Europe. Indeed, he was inspired by a mundane question many European visitors ask: “Why on earth are U.S. cellphone plans so expensive?” 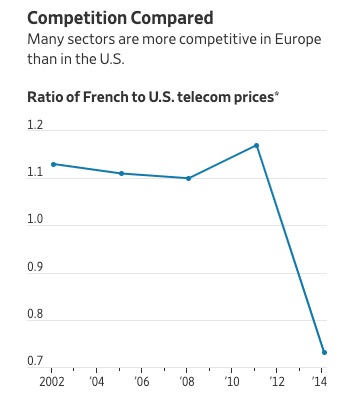 The answer is competition. In 2011, the French on average paid 17% more than Americans for telecommunication services in dollar terms. In 2014, they paid 27% less. What happened? In 2011 France granted a 4G cellphone license to French billionaire Xavier Niel ’s Free Mobile which then offered unlimited talk, text, and data, all for a fraction of what incumbents charged. Free Mobile soon captured 20% of the market and incumbents have cut prices to compete.

By contrast, the cellphone market in the U.S. is highly concentrated and about to get more so after the Justice Department said the third largest carrier, T-Mobile USAInc.,could merge with the fourth, SprintCorp. 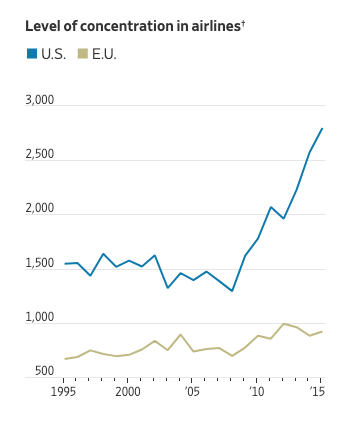 A similar dynamic has unfolded in airlines. Until 2007, Air France had a near monopoly on domestic flights. The next year French reformers allowed Britain’s low-cost EasyJet to enter the market. Low-cost airlines including Transavia, Hop and Vueling now supply a third of domestic flights and half of flights to other European Union countries. By contrast, a wave of mergers has left American skies dominated by four major carriers with foreign carriers barred from competing on domestic routes. U.S. airlines are now far more profitable than their European counterparts. 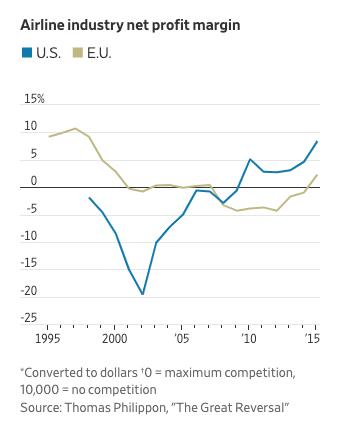 Americans may struggle to get their head around the idea of France as a champion of free markets. Indeed, Americans routinely get the EU backward. It’s caricatured as “an overreaching bureaucratic beast,” Mr. Philippon writes, a view that often reflects “ignorance or laziness.” What this caricature misses is that many interventions by Brussels, including those that infuriate Brexiteers, are designed to level the playing field across the region and increase competition.

In fact, from the EU’s beginning its architects saw competition policy as key to stamping out dangerous economic nationalism and protectionism. Coal and steel trusts had underpinned the Nazi war machine and thus they were the first industries to be transferred to European from national oversight. In 1989 the European Commission, influenced by U.S. antitrust doctrine, became the bloc’s top trustbuster.

While national authorities have spearheaded expanded competition in many sectors like telecommunications and airlines, the EU contributes via research, peer pressure, best-practice benchmarking and prohibiting state aid or other obstacles that favor domestic champions over other companies in the bloc. On competition, mergers and privacy the European Commission has become much tougher than its American counterparts. This isn’t, Mr. Philippon says, because Europeans love free markets more than Americans. Indeed, country-level regulators are often “captured” by big domestic companies, he says. American—rather than German—environmental regulators discovered Volkswagen AG was cheating on emissions tests.

Yet European leaders don’t want other countries bending the rules and have thus insisted European institutions be completely independent. This year, for example, the EC blocked a merger of the railroad units of Germany’s Siemens AG and France’s Alstom SA despite strong pressure from its two largest member nations to approve the deal.

Just as insulation from politics has advanced competition in the EU, politics may be impairing it in the U.S. where antitrust officials typically channel the priorities of the politicians who appoint them. Despite his populist rhetoric, President Trump’s policies have been largely favorable to business, including approving most mergers. State attorneys-general claim the T-Mobile/Sprint merger will undermine competition on quality and price. Mr. Trump’s appointees disagree and think it will improve rural service and speed the rollout of superfast 5G networks.

Mr. Philippon argues this makes a measurable difference to incomes. He says declining competition has raised profit margins and prices while reducing workers’ share of national income in the U.S. By contrast, the labor share has remained constant in Europe.

There are, of course, many factors that determine relative growth, and the U.S. still leads on many: innovation, venture capital and the flexibility of its labor markets. The French state still regularly influences the decisions of business via the many French companies in which it holds stakes. Yet on competition policy, where the U.S. was once the world’s teacher, it may be time to be the pupil.