Data suggest U.S. labor market has stabilized, though it likely suffered another setback from looting

The U.S. unemployment rate likely soared in May to a new post-World War II high, though there are signs the labor market is slowly mending from the coronavirus pandemic and related shutdowns.

The Labor Department is set to release its monthly snapshot of employment Friday at 8:30 a.m. ET. Economists project millions of additional jobs were cut last month, on top of the 21.4 million jobs shed in March and April.

Job loss on such a scale is unprecedented in the postwar era. The unemployment rate was 3.5% in February and surged in April to 14.7%, the highest level for records dating from 1948. Unemployment may have approached 20% or more in May, economists think.

That would approach Great Depression levels. Census Bureau research shows the jobless rate peaked in the 20th century at about 25% in 1933.

“We’ve never really been through such a large, sudden hit to the labor market affecting almost everyone, from blue-collar workers to white-collar workers, from job losses to wage cuts,” said economist Gregory Daco of Oxford Economics. He estimates more than half of U.S. workers have lost a job, lost hours or suffered pay cuts during the pandemic.

Friday’s jobs report will offer a labor-market snapshot from mid-May, when the government conducted its monthly survey of households and businesses. Fresher data suggest the labor market has since stabilized, though it likely suffered another setback from protests and looting following the May 25 death of George Floyd, who was killed in police custody in Minneapolis.

Many businesses in big cities had reopened or were set to reopen only to be looted or forced to board up during the protests. That could delay their reopening by days or weeks and cause another round of job losses.

“We had every intention to be operating right now, but now we’re back stuck in the mud,” said Mike Brand, owner of Penn Quarter Sports Tavern in Washington, D.C., which boarded up this week. “This extra week, maybe two with the riots, it’s taking a huge financial chunk.” 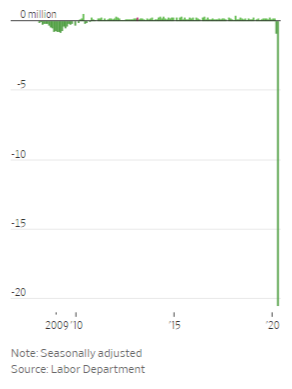 Mr. Brand laid off all 28 of his employees in early March, after nonessential businesses were ordered to close during the pandemic. When the city began the first phase of reopening last month, Mr. Brand rehired about half of his employees in the hopes of reopening the bar this week. He now plans to reopen next week. But his experience points to another challenge facing the labor market.

Many of his servers and bartenders have declined offers to come back to work, he said. Some are fearful of catching the virus; others don’t want to give up their unemployment benefits, which currently pay them more than they had earned at the restaurant. He believes that as enhanced unemployment benefits expire he will have an easier time finding workers.

Research confirms that the typical worker on unemployment is earning more than he or she had been at work because of enhanced benefits and stimulus money provided by Congress, said Becky Frankiewicz, president of ManpowerGroup North America, a job-placement company.

The Congressional Budget Office, in a letter Thursday to members of Congress, said it estimated expanding enhanced jobless benefits through January 2021 would mean five in every six claimants would make more money from unemployment insurance than from work. The program pays workers an extra $600 a week and is currently set to expire in July. Lawmakers are debating whether to extend it as part of a new stimulus bill.

Those benefits are a major reason that, despite the widespread job loss, many economists believe the economy will rebound late this year and many jobs will be recovered. Forecasting firm Moody’s Analytics projects that the unemployment rate will fall to 8.5% by year-end and that the annual job loss will settle at 8 million. Mr. Daco believes that at the worst of the pandemic, likely in May, job losses totaled about 28 million but that by year-end employment will be down by roughly 12 million.

Ms. Frankiewicz said there is a hopeful sign the labor market has turned a corner as industry data her company analyzed showed job postings rose in the past week by 10%. “As states start to reopen we’re seeing an increase in demand,” she said. “When will we be back? We got here overnight. We won’t return overnight.”

One big uncertainty is just how long some businesses will be able to hold on, given that any recovery is likely to be painfully slow. For example, many restaurants that are reopening are operating at a much smaller capacity to comply with social-distancing rules. In D.C., those rules mean Mr. Brand’s tavern will only be able to seat people outdoors.

In Portland, Ore., Kate Rafter said she had spent five weeks on furlough when she returned to work the first week of May as a business-systems analyst at a nonprofit that takes children on field trips in the Pacific Northwest. Two days after she returned, her boss told her she was being laid off. Many parents had canceled plans to send their children on trips because of the risk of catching the virus. The nonprofit said it could no longer afford to employ Ms. Rafter, she said.

She had loved the job, which offered decent pay and great health benefits, and she had planned to move out of her parents’ home and into a new place of her own. Now she is living off unemployment benefits and the stimulus check Congress provided to many households.

She is hopeful, though, because she has seen a number of job postings in her field. “I think I’ll be able to find something,” she said. She has spent recent weeks knitting hundreds of masks, which she has donated, and decluttering her parents’ home.