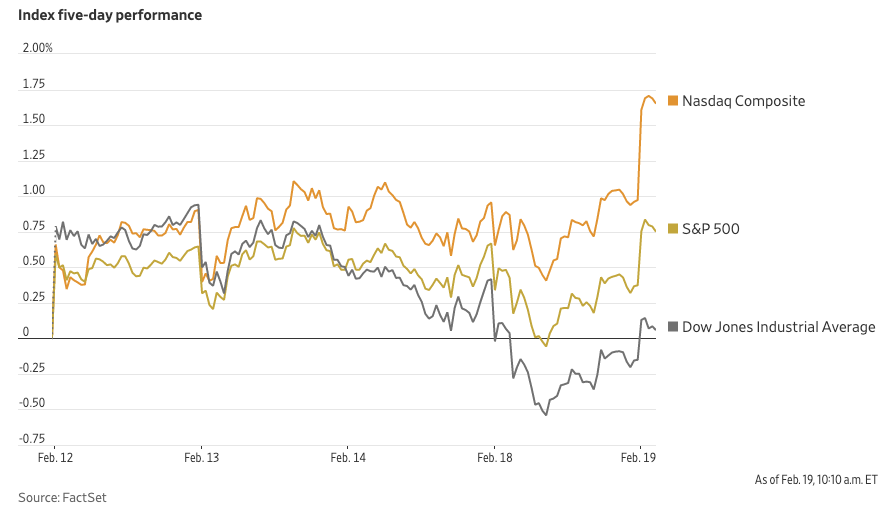 U.S. stocks rose Wednesday after China launched fresh measures to support local businesses that are struggling because of the coronavirus outbreak. 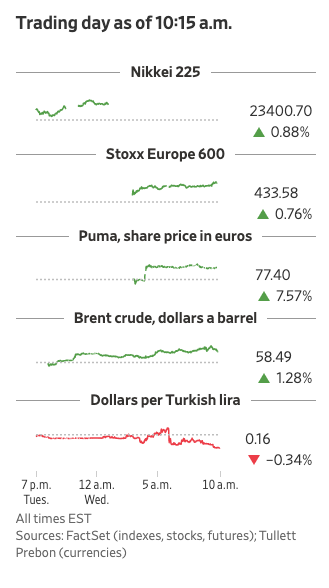 Global stocks rose as well. In Europe, shares in clothing and consumer-goods companies were among the best performers as the Stoxx Europe 600 rose 0.8%. Japan’s Nikkei 225 closed 0.9% higher amid a broad advance in Asia.

The recovery in global stocks came after China’s Ministry of Industry and Information Technology said the government would connect factories with technology companies to identify weak links in their supply chains. The assistance is one of several steps that Beijing and local Chinese authorities have taken to limit the economic fallout of the coronavirus, which has sickened 75,200 people world-wide and killed more than 2,000.

Investors are taking comfort from the measures to support businesses as well as a fall in the number of new cases of the virus being confirmed each day, according to Lyn Graham-Taylor, a rates strategist at Rabobank. However, he added that many were grappling with high levels of uncertainty about the economic toll of the epidemic, and pointed to mixed reports on whether people are going back to work.

“We’re in this weird phase at the moment where we’re in a little bit of a holding pattern because of the nature of the information coming out of China,” said Mr. Graham-Taylor said.

With official Chinese manufacturing data not due to be published until Feb. 29, investors are relying on other measures to assess the economic impact of the illness. Some of these gauges point to a steep decline in activity. Major energy producers have consumed a third less coal each day in February than normal seasonal patterns would suggest, economists at Goldman Sachs Group said in a note.

Stock markets in the U.S. and Europe are hovering near all-time highs despite the disruption caused by the outbreak because fund managers expect Beijing to boost the economy with stimulus policies, said Lewis Grant, a portfolio manager at Hermes Investment Management.

“‘There will always be someone to save us’—that is the outlook from investors at the moment,” Mr. Grant said. Hermes invests in two of the sectors that are most exposed to the outbreak—cruise providers and airlines—but for now has decided not to sell any of these shares.

Among individual stocks, shares of Groupon plunged 39% after the company reported weak fourth-quarter earnings, said it planned to shut down the part of its business that sells merchandise, and detailed plans for a reverse stock split.

Shares of Garmin rose 7.6% after the maker of sports devices reported that a key measure of fourth-quarter profit beat analysts’ expectations, with the stock at a 10-year high.

Confidence that Beijing can contain the economic fallout from the epidemic spilled over into currency markets. The Japanese yen, seen as a haven, fell 0.9% against the dollar.

Oil prices rose 1.4% to $53.04 a barrel after the Trump administration blacklisted a trading brokerage owned by Russian oil giant Rosneft, which the U.S. said has helped Venezuela export crude. The sanctions could reduce Venezuelan oil exports by up to half a million barrels a day, reducing global supplies, according to Helge Andre Martinsen, an energy analyst at Norway’s DNB Bank.

Later in the day, investors will have an opportunity to scour minutes of the Federal Reserve’s most recent monetary-policy meeting for details on policy makers’ outlook for interest rates as well as measures designed to ease strains in money markets. 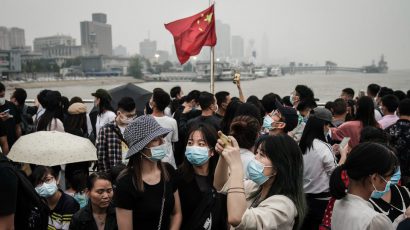 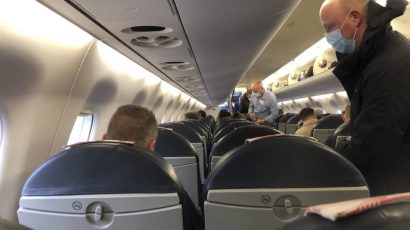 How Different Flights Around the World Look During a Pandemic

China Acceleration May Not Rescue World From Coronavirus Slowdown