When Harley-Davidson reported earnings in October it said Harley said it continued to benefit from recent efforts to optimize its manufacturing footprint.

U.S. Firms Pull Back on Investment

Capital spending by S&P 500 companies grew less than 1% in the third quarter, and would have fallen without Apple and Amazon

Many of the biggest U.S. companies are moderating their spending on equipment and other capital investment, as an uncertain business environment prompts some to postpone or shelve otherwise promising projects. That could pose a continuing drag on economic growth.

The pullback began as trade tensions escalated last fall, leaving companies unsure about their supply chains, pricing and profits. It has continued amid signs of slowing global growth and increasing consumer concerns about the future. Household names like Harley-Davidson Inc., AT&T Inc. and Target Corp. are joining small businesses in putting the brakes on investment.

Some companies have warned it could continue into next year, when the presidential and congressional election is expected to add even more uncertainty to business decision-making. 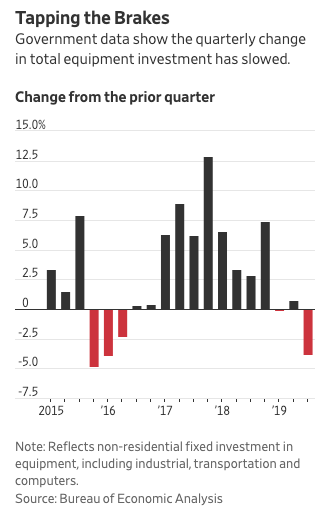 Companies slow capital investment for a variety of reasons, and few have explicitly tied their cutbacks to trade, typically citing slowing demand or project delays instead. Still, economists and analysts point to timing: The pullback began in third-quarter 2018, just as the U.S. and China began threatening and then imposing significant tariffs on one another’s goods.

“The trade uncertainty has been a major drag on U.S. investment,” Stanford University economist Nicholas Bloom said. Mr. Bloom partners with Steven Davis of the University of Chicago and the Atlanta Fed on a monthly survey of business uncertainty.

They estimated that $40 billion in investment was lost in the first half of 2019 from trade issues, amounting to a reduction of about 3% based on $1.4 trillion in estimated nonresidential fixed investment, or capital spending on equipment, buildings, vehicles, computers and the like. Since 2000, such investment has grown at 4% a year.

Trump administration officials have said trade barriers are meant in part to block imports and help revive U.S. manufacturing, while the new but unratified North American trade pact is also intended to encourage manufacturing investment in the U.S. President Trump has said higher tariffs were needed to get China to curtail trade practices that penalize U.S. businesses.

Capital spending by S&P 500 companies rose in the third quarter by just 0.8%, or a combined $1.38 billion, from the second quarter, according to data from S&P Dow Jones Indices covering companies reporting through the middle of the month.

But even that modest increase can be chalked up to a few big spenders: Amazon.com Inc. and Apple Inc. alone raised capital spending by $1.9 billion during the quarter. Without them, total spending by the 438 other companies that have reported so far would have shrunk slightly.

And overall spending would have shrunk by 2.2% absent increases from three others: Intel Corp. , Berkshire Hathaway Inc. and NextEra Energy Inc. Together, the five companies increased their capital budgets by $4.7 billion, or 30%, from the second quarter to third, the SPDJI data show.

Capital spending for 2019 by Harley-Davidson will fall about 8% from earlier projections, to between $205 million and $225 million, it said in late October. The motorcycle maker is completing planned projects efficiently, resulting in lower spending, a spokesperson said.

AT&T also said it expects to spend less on capital investment in 2020, due to cost-saving measures that are letting it invest in 5G wireless networks without increasing spending, company executives said on its Nov. 13 earnings call.

Target said annual capital spending is likely to come in at $3.1 billion, about 11% below earlier expectations, due to cost efficiencies and pushing some spending into next year. Executives said they expected $3.5 billion in spending next year as the company finishes remodeling 300 stores, and then a drop to as low as $2.5 billion a year after that.

The biggest pullback among S&P 500 companies came in the industrial sector, where total spending fell $1.8 billion, or 10%; and in financials, where spending fell $951 million, or almost 8%. Spending rose by 4.5%, or $1.2 billion, among communications-services companies.

Nonresidential fixed investment, a widely watched measure of U.S. business investment, fell by 3% in the third quarter and 1% in the second—the first consecutive quarterly decline since 2009, data from the Commerce Department’s Bureau of Economic Analysis show.

The percentage of small businesses planning to increase investment in the next 12 months rose slightly to 39% in November, from 35% the prior month but remains well below 45% a year ago, according to a monthly survey of almost 800 small firms for The Wall Street Journal by business-advisory firm Vistage Worldwide Inc. Half the companies said they expect no change to investment.

The investment plans are “consistent with a slower overall pace of economic growth as well as continued modest gains in employment during the year ahead,” Vistage said.

Dave Wilcox, CEO of Gold Systems Inc. in Salt Lake City, is pulling back on investment because of political uncertainty and the resulting slowness he expects in 2020. The company has about 30 employees and develops environmental software in the public sector.

“We are always conservative heading into an election year given the slowdown that often comes with it,” he said. With half of his business coming from the federal government, he is also worried that another government shutdown will cripple his business. Mr. Trump last week signed a spending bill that keeps the government funded through Dec. 20.

Glier’s Meats Inc., located just outside Cincinnati in Covington, Ky., recently completed multiyear equipment upgrades and replacements, but is now halting all unnecessary spending to preserve cash, also citing the looming political uncertainty and the risk of higher taxes. The company makes goetta, a regional sausage product similar to scrapple, and has fewer than 30 workers.

“We are in wait-and-see mode for at least another year,” said Dan Glier, whose father started the company shortly after he returned from World War II.