U.K. tourists take pictures with the Statue of Liberty. The U.S.’s largest export is travel services.

Some softness in demand reflects cyclical factors, such as slowing foreign economies, but other forces are weighing on exports and prompting Americans to buy more foreign services

WASHINGTON—Over the past half-century, the U.S. has evolved from an industrial superpower into the undisputed champion of the global services economy.

From 2003 to 2015, the U.S. trade surplus in services such as medical care, higher education, royalties and payments processing nearly sextupled to $263.3 billion.

Growth has since stalled, however. Exports of services barely rose in the first nine months of 2019, while imports increased 5.5%. The services surplus, at $178.5 billion through September, was down 10% from a year earlier, on pace for its steepest annual decline since 2003. 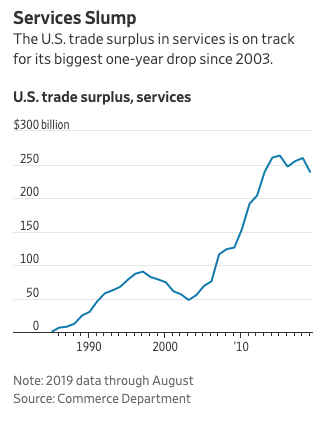 Some of the softness in service exports likely reflects cyclical factors, such as a strong dollar or slowing foreign economies. But economists say the decline in the surplus is difficult to pin exclusively on such issues. They point to other forces—some political, others more tectonic—that are weighing on exports while prompting American consumers and companies to buy more foreign services.

Much rides on whether this trend continues or reverses. While trade surpluses or deficits aren’t intrinsically good or bad, they reflect a country’s comparative advantages in the global economy. The U.S.’s prowess in academia, tech, finance and consulting creates millions of jobs, often high-skilled, and effectively helps pay for imports of merchandise such as smartphones, cars and wine.

“It goes to the heart of what the U.S. is really good at,” said Michael Pearce, an economist at Capital Economics. “These are all areas in which the U.S. is a world leader, and it’s also what drives more fundamental, supply-side growth in the economy.”

Western Kentucky University provides a case in point. Between 2011 and 2015, its enrollment of international students more than doubled to above 1,500, each paying up to $40,000 in fees. They helped the school balance its budget while it built new dorms, renovated its student union and made other upgrades, even as the state legislature reduced appropriations for the university. 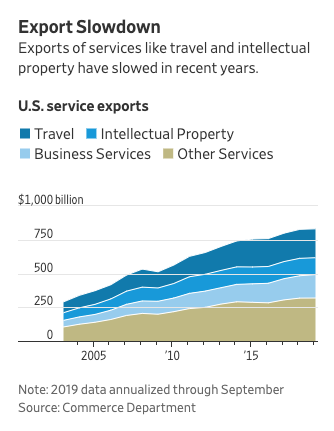 But since 2015, international enrollment has fallen by nearly half, squeezed by less-generous foreign-government subsidies, competition from other schools overseas, and a perception abroad that the U.S. has become less safe and welcoming. “It’s always been up, up, up,” said John Sunnygard, WKU’s associate provost for global learning and international affairs. “We never knew down. We started to see it, and we didn’t believe it.”

Services exports may be suffering from rising tensions between the U.S. and its trading partners. “The instability that’s been created in the trade world, in large part by tariff escalation but also just the U.S. approach to trade, has had a negative effect,” said Christine Bliss, who served as an assistant U.S. trade representative in the Obama administration. 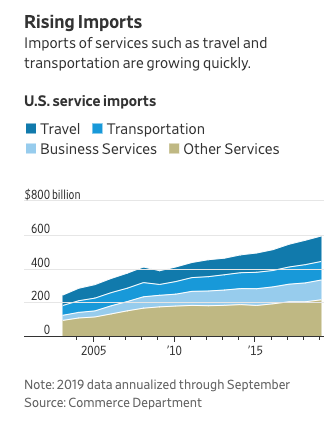 The pending trade agreement among the U.S., Mexico and Canada includes strong services provisions, and the Trump administration has pressed for better intellectual-property protection in its negotiations with China. But progress toward large-scale trade agreements in services has been halting. In his policies and rhetoric, President Trump tends to focus on farm products and factory goods, seldom services.

The U.S.’s largest export isn’t cars or soybeans but travel services: spending by foreign visitors on food, lodging, tuition, health care and other items. These exports were down 0.6% in the first nine months of this year to $160.5 billion.

The trade war with China appears to be taking a toll. U.S. immigration officials have ramped up scrutiny of visa applications by Chinese students, tourists and even medical patients seeking treatment in American hospitals. Beijing this year advised its citizens to reconsider visiting or studying in the U.S. due to heightened scrutiny at the border and frequent “shootings, robberies and thefts” on American streets.

Exports of other services, such as intellectual property and transportation, are also down this year from last.

In September, FedEx Corp. reported a drop in revenues and profits, and disclosed plans to retire or idle dozens of cargo planes due to rising trade tensions and a slowdown in the global economy. “Weakening global trade and industrial production have resulted in less-than-expected demand for our most profitable Express package and freight services,” Chief Financial Officer Alan Graf said in a conference call. “Adverse changes in international trade policies and relations would likely drive additional weakness in our business.”

Chinese telecom giant Huawei Technologies Co. has scaled back its purchases of U.S. technology products and services this year, a company official told The Wall Street Journal. It is also developing an operating system that could eventually compete with Google’s Android and Apple’s iOS, which currently dominate the Chinese smartphone market. Huawei has also begun making smartphones without American chips.

Other countries are becoming more competitive in service industries that the U.S. has traditionally dominated. Since 2004, the number of U.S. universities ranked among the world’s top 200 has fallen to 46 from 62, according to the QS World University Rankings.  China passed the U.S. as the top producer of scientific and technical articles in 2016 and leads the world in applications for patents, trademarks and industrial design.

As foreign doctors—many trained at American medical schools—get better at treating cancer and heart disease, health experts say well-heeled citizens of other countries will have less reason to seek care at U.S. hospitals. Meanwhile, more Americans are seeking health care and college abroad to avoid the spiraling costs in the U.S. From 1999 and 2018, U.S. spending on education-related travel rose 379% and health-related travel soared 1,761%, albeit from low bases.

After breaking his collarbone in a cycling accident in July, 28-year-old Cale Green, who lacks health insurance, spent days on the phone in Anchorage, Alaska, trying to figure out the cost of surgery. An orthopedic practice quoted him $3,800 plus up to $6,000 for an anesthesiologist; the local hospital offered a base price of $28,000 for drugs and a couple of hours in an operating room. Others who had undergone the procedure told him to expect a final tab between $50,000 and $60,000.

Then Mr. Green connected via WhatsApp with a doctor his girlfriend’s family knew in La Paz, Mexico, where they owned a condo. His price: $5,800.

Two weeks after the accident, Mr. Green was en route to Mexico, where the doctor and a team of nurses operated on his shoulder in a pink-stucco hospital.

“Except for the food that they brought and the people speaking Spanish, everything felt similar…it was the same care,” Mr. Green said a couple of months later, well on his way to recovery. The surgery also came with a bonus that Mr. Green would be hard-pressed to find in the U.S.: The doctor invited him to a dinner of fresh-caught marlin after his procedure.