The conflict is hurting confidence among U.S. small businesses and crimping Asian trade; ‘there is great uncertainty’

The escalating trade war between the U.S. and China is rippling through the global economy, hurting confidence among U.S. small businesses, crimping trade among industrial giants in Asia and hitting export-oriented factories in Europe.

On Sunday the U.S. imposed fresh tariffs of 15% on Chinese goods including clothing, tools and electronics. A round of retaliatory Chinese tariffs also took effect, targeting imports of U.S. soybeans, crude oil and pharmaceuticals.

Beijing said on Monday it lodged a complaint with the World Trade Organization over the Trump administration’s tariffs.

Economic confidence among small U.S. companies fell in August to the lowest level since November 2012, according to a monthly survey of more than 670 small companies conducted for The Wall Street Journal. The portion of respondents that expect the economy to worsen over the next 12 months rose to 40%, compared with 29% in July and 23% a year ago. 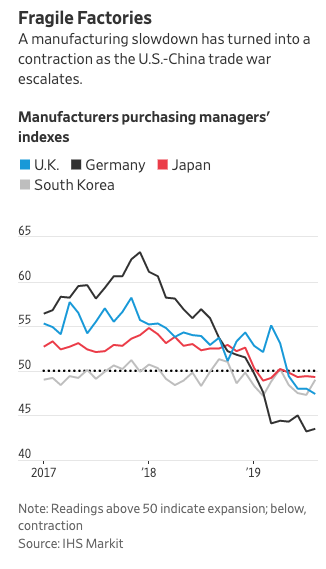 A U.S. survey of manufacturing purchasing managers to be released Tuesday will shed further light on how much the trade conflict is affecting the U.S. industrial sector. Several reports in recent days suggested the fallout was deepening globally.

Tariffs are putting upward pressure on costs for multinational companies, forcing them to look for ways to offset it. Moreover, uncertainty about the outlook for negotiations between the U.S. and China is making it difficult for managers to plan.

Both Japan and South Korea have said the tariff impact is particularly pronounced in high-tech parts and materials purchased by factories in China, such as Japanese auto parts and South Korean semiconductors. The Chinese factories use those products to manufacture finished goods, some of which are exported to the U.S.

The survey of small U.S. companies by Vistage Worldwide Inc., an executive coaching organization, was taken last month, just after President Trump announced additional tariffs on Chinese imports, but before he ordered U.S. companies to start looking for alternatives to China. Forty-five percent of the small firms—which have revenue between $1 million and $20 million—said the president’s tariff announcement would impact their businesses.

In the survey, some U.S. small-business owners said they supported the tariffs, even if they are painful in the short run, and a majority said they are optimistic about their finances. Also, tariffs are just one factor contributing to changes in the economic outlook.

But business owners on both sides of the tariff issue said the uncertainty—about if and when the duties will be applied, how large they will be and how long they will remain in effect—is making it hard to plan and is hurting their businesses.

“It’s overwhelming. It’s exhausting. It’s demoralizing,” said Susan White Morrissey, founder of White + Warren, a cashmere brand in New York. “My employees just want to know what to do. This is probably the first time in my career that I can’t give them the answers.”

White + Warren this year added five employees and boosted inventory to increase e-commerce sales, but the 30-person company is struggling to plan as the trade dispute heats up. Tariffs imposed this summer slashed profit on its ribbed cashmere hats made in China by 50%.

“It’s hard enough to adjust to price increases, but it’s just more difficult when you are uncertain how policy will unfold in the future,” said Richard Curtin, a University of Michigan economist who analyzed the Vistage data. “For small firms that means being more cautious in your investment and hiring plans.”

Wiscon Products Inc., a precision machine shop in Racine, Wis., normally orders raw materials six months in advance, but these days it is having trouble getting customers to decide what they need in three weeks. One auto maker canceled a $2 million parts order destined for China because of escalating trade tensions.

The 75-year-old company has replaced about 40% of lost revenue through aggressive marketing and expects to end up stronger, with a more diversified customer base. Yet, it has put off plans to buy new machines.

“This is the strangest I’ve ever seen it,” said Wiscon President Torben Christensen, who has run the company for the past decade. “It’s busy. The economy is booming, but there is great uncertainty. A lot of it has to do with trade policy.” 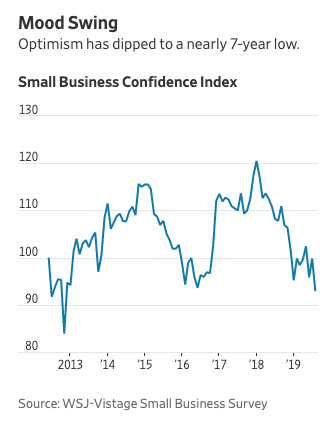 Trade talks have mostly stalled since late May, when negotiators were believed to be close to a deal. Since then negotiators have sought, so far without success, to reach a limited preliminary arrangement that would have China committing to buying more U.S. farm products and the U.S. agreeing to ease off restrictions on China’s Huawei Technologies Co.

Additional U.S. tariffs of 15% on $156 billion of Chinese-made smartphones, laptops, toys, videogames and other products have been set for Dec. 15.

On Friday, Mr. Trump rejected the notion that his trade policies were hurting the U.S. economy. He blamed “badly run and weak companies” for any business setbacks and urged the Federal Reserve to cut interest rates to support the economy.

“There needs to be some kind of stabilization in the tariff situation and pricing,” Mr. Clark said. “I hate to sign a contract for the next two years without an element of certainty.”

Travis Luther, founder of Queen Anne Pillow Co., a Denver-based maker of high-end bed pillows, said larger competitors have accelerated purchases to get ahead of tariffs, something his six-year-old company can’t afford.

“That’s not a very healthy move for small companies or upstarts,” said Mr. Luther, whose company is already paying higher tariffs on Chinese-made cotton textiles used to make pillows in the U.S.

To adapt, some companies are relocating production. LumiGrow Inc., a 30-employee maker of LED lighting used in horticulture, is shifting to a factory in Malaysia just one year after it moved production to China from the U.S. to reduce costs.

Jay Albere, the Emeryville, Calif.-based company’s chief executive, supports tariffs but not quick shifts in trade policy. One shipload of LED lights was on its way from China when higher tariffs were imposed this spring with just a few days notice. “Just give me the ability to plan for it and make a smart business decision,” he said. “The lack of certainty is really, really hard.”

Some small-business owners say switching from Chinese suppliers isn’t an option. Charlotte, N.C.-based remodeez said other countries don’t have the know-how or infrastructure to produce its deodorizers. Even if it could find a new factory, the cost of switching at this stage of the 31-year-old company’s development would be debilitating given the investment it has made in China, it said.

The startup plans to absorb the cost of the tariffs rather than raise prices for the deodorizers, which typically retail for $9.99. “Today, we’re an impulse buy,” Chief Executive Jason Jacobs said. “Once you cross the $10 threshold, it’s a whole different retail psychology.”

Meanwhile, the higher costs are pinching cash flow and crimping expansion plans. “It’s not going to crush us,” said Mr. Jacobs, who previously founded two successful software startups. “But if this was having to put food on my table, I’d be done. The reason I can get through this is I don’t need a paycheck.”