The U.S. now has lower taxes than all but three countries in the Organization for Economic Cooperation and Development, the report says.

WASHINGTON—President Trump’s 2017 tax cuts reduced the U.S. tax burden to one of the lowest among major world economies, according to a Thursday report by an intergovernmental organization.

U.S. tax burdens dropped by the largest amount among those countries in 2018, and the U.S. now has lower taxes than all but three countries in the Organization for Economic Cooperation and Development, the report said.

That 2.5 percentage-point drop was only the fourth time since 1995 that any country’s tax burden has declined by at least that much in one year outside of the financial crisis, according to OECD, an intergovernmental economic organization with 36 member countries including the U.S.

The steepness of the decline stemmed partly from an increase in 2017, when a one-time tax from the 2017 law was counted as revenue that year.

Measured as a share of the U.S. economy, taxes are now 10 percentage points below the 2018 OECD average of 34.3%. Among 34 countries with preliminary 2018 data, the U.S. tax burden is lower than everywhere except Chile, Ireland and Mexico. The tax cut drove U.S. taxes below Turkey’s, and taxes in France and Denmark are now nearly twice what they are in the U.S.

The 2018 data mark the culmination of nearly two decades of tax-cutting in the U.S., starting with President George W. Bush’s tax cuts in 2001 and 2003. Congress let some of those tax cuts expire at the end of 2012, during President Barack Obama’s administration, and raised some taxes on high-income households.

The net effect of fiscal policy this century has been lower taxes and larger budget deficits. In recent years, the U.S. has been increasing spending while cutting taxes, and its general budget deficit is the largest in the OECD.

In 2000, just before the Bush tax cuts and a recession, U.S. governments collected 28.3% of GDP in taxes, 5.5 percentage points below the OECD average. Then, the U.S. was closer to the middle of the pack, with higher taxes than Switzerland, South Korea and Japan.

The U.S. fiscal system operates differently from those in much of the rest of the world. Other nations rely on value-added taxes to finance generous and universal social benefits, including health care and parental leave.

The U.S. also relies more on state and local tax collections than many other countries do. Those figures are included in the OECD totals to allow for cross-border comparisons.

The U.S. has no value-added tax and offers a less robust social-safety net. In 2018, U.S. governments collected 17.6% of their revenue from taxes on goods and services, the lowest in the OECD. 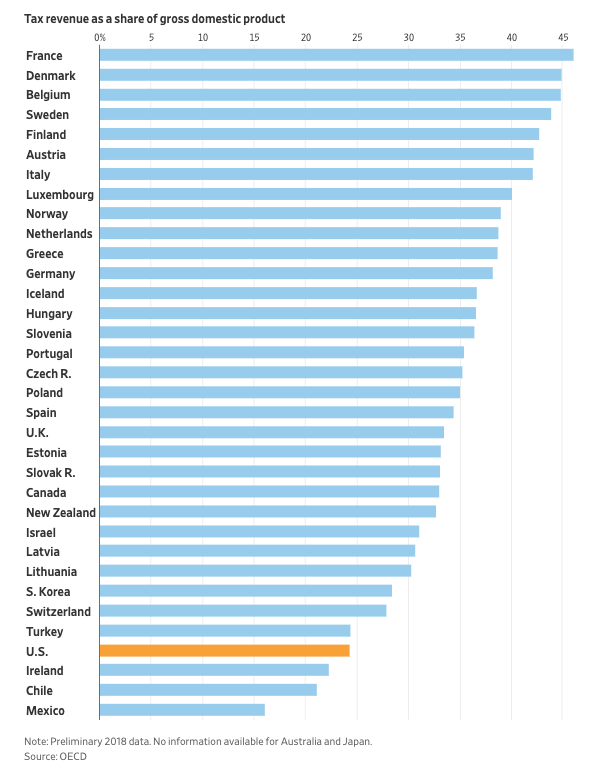