White House boosts funds for military, veterans and aims to reduce deficits by $4.6 trillion over a decade, in part through curbs on Medicare, Medicaid

WASHINGTON—President Trump is expected to release a $4.8 trillion budget Monday that charts a path for a potential second term, proposing steep reductions in social-safety-net programs and foreign aid and higher outlays for defense and veterans.

The plan would increase military spending 0.3%, to $740.5 billion for fiscal year 2021, which begins Oct. 1, according to a senior administration official. The proposal would lower nondefense spending by 5%, to $590 billion, below the level Congress and the president agreed to in a two-year budget deal last summer.

A White House budget reflects an administration’s priorities in spending negotiations for the next fiscal year. This year, the budget proposal also reveals Mr. Trump’s fiscal policy objectives should he win re-election, and his campaign messaging will likely reflect it.

Where the Cuts Are

Proposed spending changes over a decade compared with current law, by major category

The proposal is unlikely to become law, however, as Democrats control the House and spending bills in the GOP-led Senate need bipartisan support. Democrats signaled their opposition later Sunday to the administration’s budget plan, which Rep. John Yarmuth (D., Ky.), chairman of the House Budget Committee, called “destructive and irrational.”

Mr. Yarmuth criticized Mr. Trump’s proposal as targeting “programs that help Americans make ends meet—all while extending his tax cuts for millionaires and wealthy corporations,” he said in a statement, adding that “Congress will stand firm against this President’s broken promises.”

Budget analysts expect lawmakers to punt final decisions on 2021 spending until after the November election, and instead fund the government with temporary spending measures for the first few months of the fiscal year.

NASA would see a 12% increase next year under Mr. Trump’s proposal as he seeks to fulfill his goal of returning astronauts to the moon by 2024. On the other hand, the Environmental Protection Agency’s spending would be slashed by 26%.

The plan would request $2 billion in new funding for construction of the wall on the southern U.S. border, the senior administration official said—Mr. Trump’s signature 2016 campaign promise that sparked fights with Democrats, leading the president to trigger a historic five-week government shutdown last winter after lawmakers refused to fund the project. The latest $2 billion request is less than the $5 billion the administration sought last year.

The White House proposes to cut spending by $4.4 trillion over a decade. Of that, it targets $2 trillion in savings from mandatory spending programs, including $130 billion from changes to Medicare prescription-drug pricing, $292 billion from safety-net cuts—such as work requirements for Medicaid and food stamps—and $70 billion from tightening eligibility access to disability benefits.

In campaigning for the White House Mr. Trump had promised voters he would protect funding for Medicare and Medicaid. His new budget’s proposals to find savings through changes to those programs reflect longstanding GOP efforts to reduce federal safety-net spending, and come the week after all but one Republican senator voted to acquit the president of impeachment charges passed by House Democrats.

The budget plan assumes the $1.5 trillion tax-cut package enacted in 2017, set to expire by 2025, is extended, and projects revenues in line with last year’s proposal. It also expects economic growth will be faster than most economists predict if the president’s policies are implemented. After a brief pickup in 2018, growth last year settled back to the roughly 2% pace that has prevailed during the decade since the recession ended, where many economists expect it to remain. At the same time, unemployment has fallen close to a 50-year low. 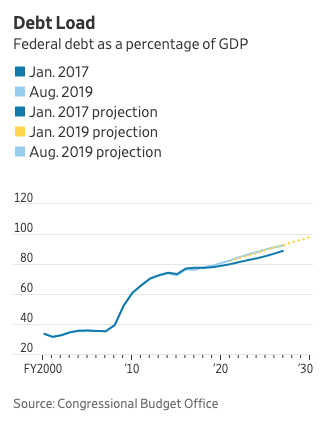 The White House projects the economy will grow 3.1% in the fourth quarter of 2020 compared with a year earlier, and 3% in 2021, and that it will continue to expand at that pace for the rest of the decade. But the administration expects year-over-year growth—comparing total GDP for the year—to be slightly lower in 2020 than it forecast last year, the senior administration official said.

The federal budget deficit would shrink to $966 billion next year from an estimated $1 trillion in 2020, but more than twice what Mr. Trump projected in his first budget proposal in 2017. The administration forecasts total deficits over the next decade would shrink $4.6 trillion under its plan, and annual deficits would be eliminated by 2035. During his 2016 campaign, Mr. Trump discussed paying off the federal debt within eight years.

Though Trump budget officials have pushed for spending cuts to reduce deficits, the president has reached two agreements with congressional Democrats to boost spending above limits set in 2011.

Meanwhile, tax cuts enacted in 2017 have reduced government revenues as a share of economic output, pushing deficits as a share of GDP to 4.7%, well above the 2.7% average over the past 50 years.

The administration forecasts the 10-year Treasury yield, which reflects the cost of government borrowing to finance the deficit, will average 2% in 2020 and rise gradually over the next decade, well below the rates forecast in last year’s budget. The change reduces projected net interest costs by $600 billion over the next decade.

Under Mr. Trump’s plan the budget of the Department of Veterans Affairs would rise 13% next year, and the Department of Homeland Security’s 3%. The National Nuclear Security Administration’s budget would get a 19% boost.

The Department of Housing and Urban Development’s budget would be cut by 15%, although the proposal includes $2.8 billion in homelessness assistance grants. Mr. Trump has repeatedly criticized Democratic-led cities, saying they have failed to address homelessness.

The Commerce Department’s budget would be reduced by 37% from 2020, but officials said much of that cut can be attributed to the completion of the census. Foreign aid would be slashed by 21%.

The Centers for Disease Control and Prevention would see its budget decline 9%, but with the coronavirus sparking global panic, $4.3 billion in funding for fighting infectious diseases would be preserved.

The budget also proposes moving the U.S. Secret Service from DHS to the Treasury Department, in a win for Mr. Mnuchin, who has pushed for such a move. The change would require congressional approval.

Security assistance to Ukraine would remain at current levels following Mr. Trump’s decision last summer to suspend congressionally approved aid as he pushed the country to investigate 2020 Democratic candidate Joe Biden, an episode at the center of the impeachment saga.The budget eliminates funding for the Yucca Mountain Nuclear Waste Repository in Nevada. Mr. Trump has said he hopes to work with state politicians, who widely oppose the repository, on an alternative. Nevada is a battleground state in the coming presidential election.

U.S. to Ban Travel From Europe for 30 Days Due to Coronavirus