Workers installed a dashboard at a Mack Trucks assembly facility in Macungie, Pa., in December. New purchases of heavy trucks are declining across the industry and production rates are dropping.

The U.S. trucking industry had one of its strongest years ever in 2018, as high demand for freight encouraged transportation companies to expand their fleets. Now, trade tensions and slower global growth are depressing freight volumes. Freight rates have fallen more than 20% from a record in June 2018, says St. Louis-based research firm Broughton Capital LLC. Trucking companies, in turn, are ordering fewer trucks.

“There are more trucks than there are loads now,” said Kyle Kottke, general manager for Kottke Trucking Inc. in Buffalo Lake, Minn. 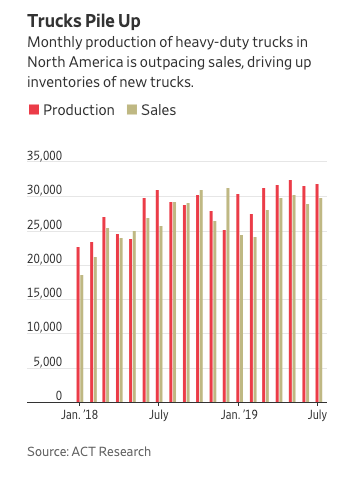 Production for heavy trucks is still brisk, as manufacturers work to fill orders placed over the past year, but new purchases are declining and production rates are dropping.

The slowdown is rippling through to the companies’ suppliers, contributing to a broader slowdown for U.S. manufacturers. Manufacturing production as a whole was down 1.6% this year through July, according to the Federal Reserve. EatonCorp. , one of the largest makers of truck transmissions, recently warned of lower auto-related sales for the year, and cab builder Commercial Vehicle GroupInc. said order rates have been falling.

Investors in truck manufacturers have been anticipating a slumping truck market for months. Over the past 12 months, stock prices for Paccar and Navistar have declined more than the overall stock market.

XL Specialized Trailers Inc., which assembles flatbed trailers for hauling big loads such as construction equipment, has experienced a drop in orders over the past 90 days, said Stuart Sleper, president of the Manchester, Iowa-based company.

Big swings in production are typical in the truck industry. Like farmers, truckers tend to aggressively buy equipment when they are flush with cash but quit buying when their incomes drop.

ACT Research estimated that trucking companies have added about 6% more capacity to their fleets, or about 90,000 heavy-duty trucks, than what was actually needed to handle the freight volumes over the past two years. Production of heavy-duty models is expected to reach about 350,000 vehicles this year, the second-highest level since 2006.

But a reversal is predicted. ACT Research expects production of heavy-duty trucks to fall to about 238,000 vehicles next year, a rate more typical of years when trucking companies are only replacing worn-out vehicles in their fleets.

“It would not take much of a weaker [gross domestic product] to send the truck industry down more,” said Don Ake, vice president of commercial vehicles at transportation-equipment research group FTR.

Some truck manufacturers have already told their suppliers they intend to cut truck production beginning in the current quarter, Mr. Ake said. He expects other truck builders to follow suit and predicted production will be down by 20% in the fourth quarter from the current level.

Some of the trucking industry’s biggest customers, including the steel industry, automotive suppliers and farmers, are scaling back too.

“Everybody is fighting over the same pool of freight,” said Robert Haag, vice president of operations for Indianapolis-based Perfect Transportation LLC. 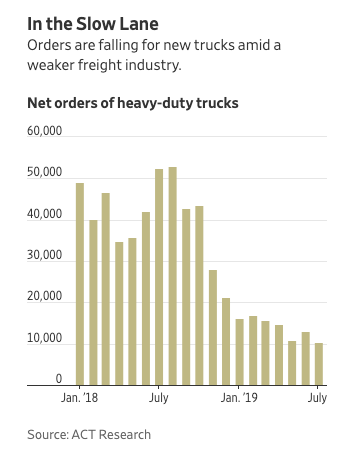 Order cancellations are also rising. Dave de Poincy, president of East Manufacturing Corp., said the truck-trailer maker’s cancellation rate is nearly 8%, compared with a typical rate of below 1%. He expects production to fall 20% in the company’s fiscal year ending in May.

“They don’t need any more trailers right now,” he said. “The flatbed industry is a real indicator of economic health.”

VanKampen has cut its fleet by 10 trucks, to 140 this year, and Mr. Wozniak said freight demand will likely fall further if President Trump follows through on plans to apply new tariffs to Chinese goods. 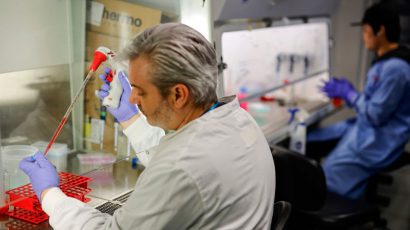 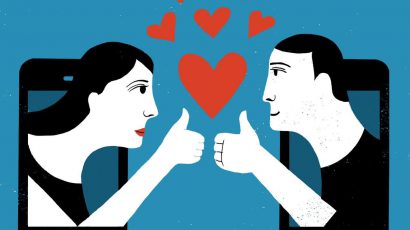 Alibaba Takes a Hit From Coronavirus