PARTAGER TikTok Wants to Stay Politics-Free. That Could Be Tough in 2020.

By Georgia Wells and

TikTok exploded into a social-media sensation last year by pushing lighthearted videos of dance-offs, hedgehogs giggling and puppets singing about chicken nuggets. Now politics is putting that formula of frivolity to the test.

TikTok has been flooded with political content in recent weeks, much of it related to President Trump’s re-election campaign.

“Trigger warning. I exist!” says an audio track that blares in the background of many of the most popular videos about Mr. Trump. “I love Trump. I’mma vote Trump 2020!”

One popular meme features Mr. Trump saying “Keep America great,” paired with the question “Do you support lgbt?” The video blasts the sound of gunshots as the person in the video pretends to shoot word bubbles for “lesbian,” “gay,” “bi” and “transgender,” replacing them with “liberty,” “guns,” “beer” and “Trump.”

Videos tagged #Trump2020 were viewed more than 200 million times in the last three weeks of 2019, according to the app’s tally. Posts about Democratic candidate Bernie Sanders are also popular, but on a smaller scale. Videos tagged #Bernie2020 received about 24 million views over the same period. 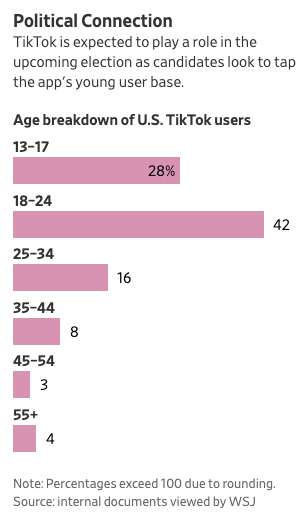 Advisers from both major parties now say they are looking at ways to use the app as a platform for reaching young voters.

That puts TikTok in a tough position. The company last year banned political ads, and it says it remains committed to its mission to “bring joy” to users rather than serve as a forum for charged debate on social issues.

TikTok’s political content is mostly homemade and posted by users, rather than being formal messages from campaigns. It tends to be whimsical or catchy, often set to music and featuring memes about candidates. The company says it doesn’t encourage political speech but doesn’t forbid it either.

“Ultimately, TikTok is a platform for our users, and they can post videos on whatever is interesting and expressive to them, aside from things like hate speech,” a spokeswoman for TikTok said in a statement.

Yet there is growing awareness across the political spectrum that TikTok could be a powerful tool for connecting with Gen Z, a demographic of largely first-time voters that is expected to make up one in 10 eligible voters in the 2020 presidential election, according to the Pew Research Center.

In the U.S., TikTok has about 24 million active users, according to mobile data and analytics firm App Annie. About 40% of these users are between the ages of 18 and 24, according to internal documents viewed by The Wall Street Journal. Altogether, about 70% of TikTok users in the U.S. are of voting age.

Some political campaigns are grappling with the use of TikTok, whose massive popularity is at odds with concerns raised by U.S. agencies that the platform could pose a national security threat because it is owned by Chinese conglomerate Bytedance Inc.

Those national security concerns led the Democratic National Committee last month to suggest presidential campaigns not use the app, according to an email reviewed by the Journal. The DNC sent a notice to campaigns citing worries about TikTok’s “Chinese ties and potentially sending data back to the Chinese government.”

The DNC said campaign staffers who are already using the app should delete it and suspend their accounts. For staffers who need the app for campaign work, the DNC recommended using a separate phone and account, according to the email. The Republican National Committee didn’t respond to a request for comment.

TikTok has said the Chinese government has never asked for access to any of its user data and that it wouldn’t share any if asked.

The evolution of Facebook Inc. and Twitter Inc. suggests that three-year-old TikTok faces an uphill battle in trying to keep politics from polluting the carefree vibe that made the app popular in the first place, according to experts who study social media.

“I’m not optimistic that the cat ever goes back in the bag,” said Joseph Seering, a doctoral candidate at Carnegie Mellon University who studies content moderation.

The difficulty in shaping content also gets harder as users multiply and test limits. Kate Klonick, an assistant professor at St. John’s University School of Law, said TikTok was “in the kindergarten of speech platforms for a while—and now they are in college.”

Those companies, along with Facebook, are under heightened pressure ahead of the 2020 election to minimize nefarious attempts to manipulate discussions and sow divisions, as bad actors were able to do in the 2016 campaign.

TikTok’s approach to politics contrasts with that of rivals that encourage politicians to use their platforms, create news feeds about candidates and live-stream political debates, the spokeswoman said.

For instance, although the Trump campaign doesn’t have an official TikTok page, similar to most Democratic presidential hopefuls, it has reached out to accounts with large supportive followings, including some with the Trump 2020 flag in their videos, a person familiar with the matter said.

The strategy appears to fit with the vision of Brad Parscale, Mr. Trump’s campaign manager, who has been looking for places to broadcast Mr. Trump’s message beyond Facebook and Twitter. “Even if Silicon Valley decides they want to shut us off in every way, we have plans to get around anything they want to do,” he said at a campaign briefing in December.

In Grand Rapids, Mich., Jeremy Opper had never posted about politics on social media before early November, when he started uploading videos of his pickup truck covered in a vinyl wrap of an American flag. Mr. Opper said he added the hashtag #Trump2020 because TikTok suggested it would help the posts go viral. “It was easy, and it was trending,” he said.

Kyle Tharp, communications director at progressive nonprofit Acronym, said his team is planning to experiment on TikTok this month to see if they can engage influencers to help boost voter registration. “Seeing a platform with such wide usage of potential young voters is definitely worth a shot,” he said.

U.S. to Ban Travel From Europe for 30 Days Due to Coronavirus