The Euro Has Kept Falling. Investors Wonder How Low It Can Go.


PARTAGER The Euro Has Kept Falling. Investors Wonder How Low It Can Go.

Currency’s outlook rests in part on who will be more aggressive in easing, the ECB or the Federal Reserve 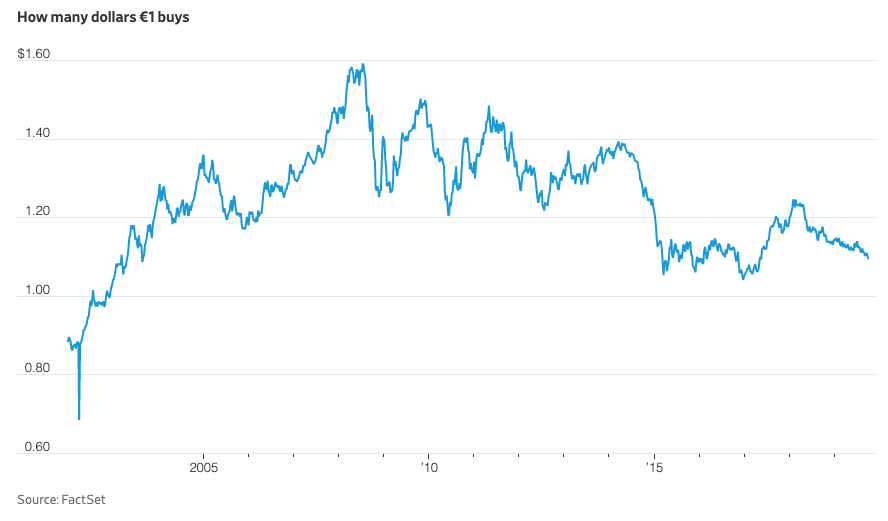 The euro has drifted toward its lowest levels against the dollar in years as Europe takes the brunt of a global growth slowdown. Investors are now questioning: How low can it go?

Sending the currency weaker are the eurozone’s deeply negative rates and expectations of further easing from the European Central Bank. Investors are shifting from the euro into higher-yielding U.S. assets, supporting the dollar. Also at play: Broader concerns about trade tensions and the slowing global economy are sending money into haven assets, like the dollar.

Whether the euro’s slide will continue rests in part on who be more aggressive in easing, the ECB or the Federal Reserve. After this week’s negative U.S. manufacturing data and a swoon in stocks, futures markets now ascribe a 93% chance that the Fed will cut rates for the third time this year in October.

The Fed has more room to cut than the ECB, since rates in the U.S. are positive. Yet some say that won’t be enough to keep the euro from falling.

Salman Ahmed, chief investment strategist at Lombard Odier IM, doesn’t discount the possibility of the exchange rate reaching $1 to the euro, known as parity. He thinks that is especially true if eurozone governments fail to boost spending to counteract the slowdown. 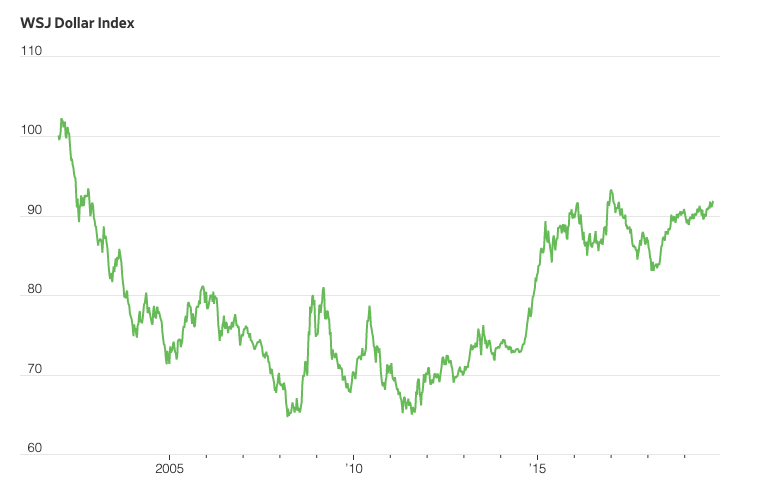 “If fiscal policy doesn’t come to the fore [in Europe] then parity is a credible forecast: A recession would put much more pressure on monetary policy to be more aggressive,” said Mr. Ahmed.

A weaker currency in theory is good for the eurozone. Many of Europe’s largest listed companies are export oriented or have large operations overseas, both of which are helped by a weaker currency. But analysts say that benefit could be limited against the backdrop of new trade barriers and antitrade sentiment.

“If you’re an exporting nation and your currency drops that is helpful but exports are also linked to the global trade backdrop,” said Caroline Simmons, deputy head of UBS Wealth Management’s U.K. investment office, which sees eurozone earnings expectations as unrealistically high.

Another complication for the euro: President Trump. He has railed at the Federal Reserve to cut rates to weaken the dollar as recently as Tuesday. But if he chooses to engage aggressively with the EU on trade, the euro could fall further.

“Further weakness in the euro, for whatever reason, may annoy and aggravate the POTUS who already thinks the Europeans are nearly as bad as the Chinese with their FX policies,” said Neil Dwane, global strategist at Allianz Global Investors. 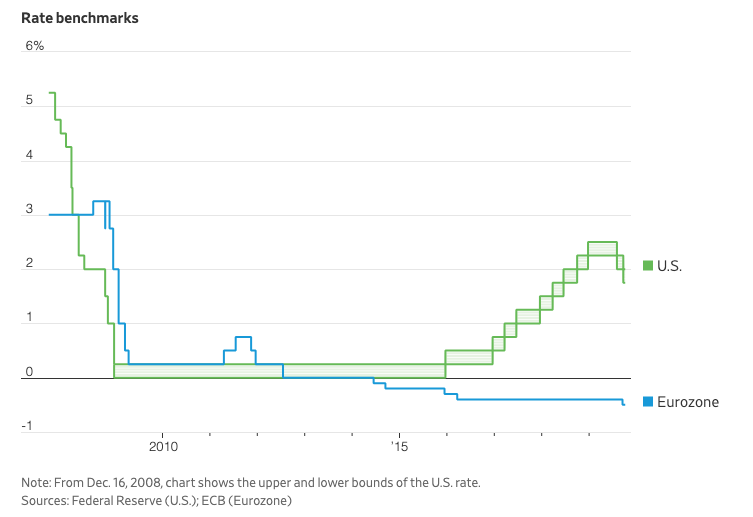 Trade tensions between the U.S. and Europe were on display Wednesday, when Washington said it would impose retaliatory sanctions on $7.5 billion worth of European goods, including whiskey, cheese and hand tools.

For U.S. companies, the flip side of the weak euro is that it hurts earnings in Europe, as overseas revenue is worth less in dollars when earned in a weaker currency. S&P 500 companies generate 12% of their revenue in the European Union, according to FactSet.

Another wild card for the euro is the change in leadership at the ECB. Former International Monetary Fund head Christine Lagarde is set to take the helm from President Mario Draghi later this month at a time when there is little consensus among the rate-setting committee.

Sabine Lautenschläger, the most senior German official at the ECB and a member of the executive board, resigned unexpectedly last month. The board members were split on the decision to restart the bank’s giant bond-buying program.

Ms. Lagarde has pledged to review controversial ECB policies such as negative interest rates and large-scale bond purchases, but has suggested she will leave them in place.

Most currency strategists don’t see the euro hitting parity with the dollar in the future. Of 71 analysts polled by FactSet, five think the euro will be weaker at the end of the year, and none see it below $1.05.

“We’re fairly close to a bottom for the euro now and it’s always messy at that point, you can get pockets of illiquidity. But we’re sufficiently far away from parity not to get there,” says Daniel Tenengauzer, head of markets strategy and insights at BNY Mellon in New York.