President Trump’s advisers have said currency intervention is off the table, but the president has insisted he hasn’t ruled it out.

For decades, U.S. currency policy was to, in effect, have no policy. Administrations seldom intervened in markets, advised other countries to do the same and claimed a strong dollar was in the country’s interest.

That is changing. President Trump has already disavowed support for a strong dollar, and officials have considered whether to use currency intervention as a weapon in their trade war.

This has raised a host of questions among investors and traders: How and under what circumstances would U.S. officials intervene? Would it work? What would other countries do in response?

President Trump has sought to reduce the U.S. trade deficit and complained that the country’s currently strong dollar, which he blames on the Federal Reserve keeping interest rates higher than those rates abroad, hampers that by putting U.S. companies at a competitive disadvantage.

He lashed out again Thursday on Twitter after the European Central Bank announced plans to cut rates and buy bonds to help prop up its flagging economy.

The dollar briefly jumped on the ECB action, and by the end of last week was up 9.8% from its 2018 lows against an index of six major currencies, according to the Intercontinental Exchange.

Fred Bergsten, a senior fellow at the Peterson Institute for International Economics, said, “If you were serious about trying to reduce the U.S. trade deficit, you would have to find a way to weaken the exchange rate of the dollar.” 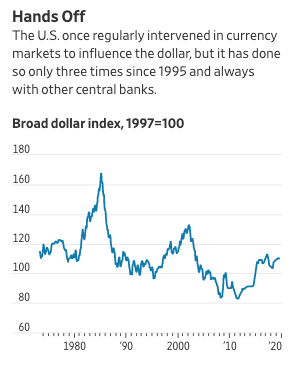 The primary challenges, Mr. Bergsten and others said, are twofold: Any effort to weaken the dollar would be working against current market forces and would be unlikely to draw international support, raising doubts about its effectiveness. Also unclear is whether the Fed, which typically coordinates with the Treasury Department on currency moves, would back such efforts. “You would be running up against economic fundamentals and political reality,” Mr. Bergsten said.

The administration has sent mixed signals on its intentions. Mr. Trump’s advisers have said intervention is off the table, but the president has insisted he hasn’t ruled it out. Wall Street analysts don’t expect intervention is imminent, but last month Morgan Stanley strategists said the longer the Fed disappoints Mr. Trump’s demands for rate cuts, the more likely intervention becomes. 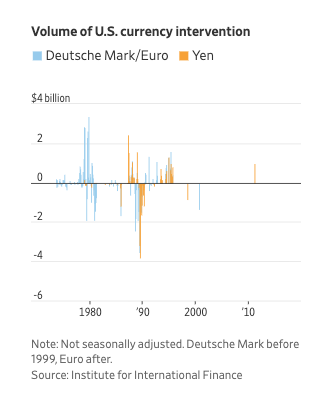 In Congress, Republicans and Democrats, including Sen. Elizabeth Warren (D., Mass.), are increasingly calling for action to keep the dollar from strengthening further.

Because the dollar’s recent strength reflects the U.S.’s comparatively higher interest rates, the most effective way to weaken it would be for the Fed to cut rates. But the Fed’s interest-rate decisions are independent of the administration.

The White House has its own levers. The 1934 Gold Reserve Act gives it broad powers to intervene by selling dollars to buy foreign currencies.

The Treasury Department maintains a fund of about $95 billion for such operations, and it could direct the Federal Reserve Bank of New York, as the Treasury’s agent, to liquidate some of those holdings to sell dollars. The Fed would be obligated to comply.

The Treasury could also “warehouse” a portion of the fund’s foreign currencies with the Fed, pledging its assets in exchange for newly created dollars. The Fed chairman and vice chairman and the New York Fed president would have to approve.

The Fed also has the power to intervene in currency markets directly by selling dollars, and has often coordinated with the Treasury to give currency operations a bigger boost. In practice the Fed and the Treasury have split operations evenly since the mid-1990s.

Would such an operation actually work?

U.S. intervention would be tiny compared with the $5-trillion-dollar-a-day foreign exchange market, and likely more effective against smaller, emerging-market currencies rather than larger ones like the euro.

It would be more effective if the Fed and other finance ministries and central banks participate, such as during the 1985 Plaza Accord when France, then-West Germany and Japan joined the U.S. to drive the dollar down.

With growth in other countries lagging behind the U.S. economy, it is hard to imagine international allies agreeing to buy dollars to help bolster U.S. economic growth at their expense, Mr. Bergsten said. Some may try to counteract a U.S. intervention by selling their own currencies, which would essentially neutralize the benefits. In a Wall Street Journal survey this month, 78% of economists said intervention would be somewhat or very ineffective.

Large-scale intervention would also put the Fed in an awkward position. Some officials may be reluctant to support what would in effect be further monetary easing, since a weaker dollar pushes up import prices and puts upward pressure on inflation. Cooperating could raise doubts about the Fed’s independence and credibility when it already faces political pressure to lower rates.

On the other hand, “You would be sending a message of disapproval if you didn’t go along,” aggravating tensions with the White House, said Edwin Truman, a former Fed and Treasury official involved in currency policy for more than 20 years. To avoid pouring “gasoline on the fire, then you might go along.”