Stocks Bounce Back in Volatile Session on Hopes for Rate Cut

Worries over a possible economic downturn have grown this week, prompting rate-cut hopes

The Dow Jones Industrial Average dropped as much as 335 points—and then recovered all of those losses to finish more than 120 points higher—after data showed services activity softened in September.

The Institute for Supply Management said its nonmanufacturing index hit a three-year low, sparking fears a manufacturing slowdown had spread to other parts of the economy.

The blue-chip index had already tumbled about 840 points, or 3.1%, over the two previous trading sessions on worries about an economic downturn. Reports earlier in the week showed U.S. factory activity slid to a 10-year low in September and the pace of job creation in the private sector slowed.

Thursday’s services data added to the anxiety, prompting traders to increase their bets on further easing by the Fed.

Federal-funds futures show traders are betting there’s a 53% chance of the central bank lowering its benchmark short-term interest rate two more times by the end of the year, according to the CME Group. That’s up from 39% Wednesday and 19% a week ago.

“While the economic picture is uncertain, investors feel the Fed is providing an antidote to any of this economic uncertainty by lowering rates and stating that they’re going to remain accommodative if the economy shows weakness,” said Jeff Kravetz, regional investment director at U.S. Bank.

“As long as you have the Fed on the side of the market with low rates, that’s really providing a backstop for investors.”

The services sector had previously been considered a bright spot in the economy, overshadowing signs of weakness in the manufacturing space. But cracks started to emerge last week after data showed consumer spending cooled in August.

“Friday’s employment report is crucial,” said Jeff Sica, chief investment officer at Circle Squared Alternative Investments. “If that number also comes in weak, that could lead to the next leg down in the market.” 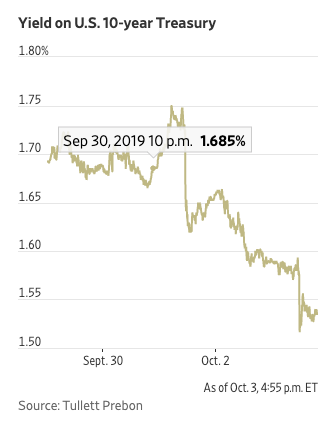 Investors continued to seek the safety of government bonds and gold. The yield on the benchmark 10-year U.S. Treasury note dropped for the sixth straight session, to 1.531% from 1.594% Wednesday, as bond prices rose. Gold climbed 0.4% to settle at $1507.10 a troy ounce, up for a third consecutive session.

Within the S&P 500, all 11 sectors ended the session higher, led by the energy and technology segments.

In corporate news, PepsiCo shares climbed $3.99, or 3%, $137.93, on a better-than-expected earnings report. The food-and-beverage company posted strong revenue growth, though foreign-exchange moves weighed on the business.

“The biggest risk to the market continues to be the escalation of the trade war,” said Carin Pai, head of equities and portfolio management at Fiduciary Trust Company International. “Right now the consumer is holding up well, but if we start to see that negatively affected based on trade and a slowdown in spending by companies, it will become more problematic for the economy.

verseas, the Stoxx Europe 600 fell less than 0.1% as fresh data added to the gloomy outlook for the broader European economy.

The U.K. services purchasing managers index hit a six-month low of 49.5, below the 50 level that marks contraction. The figures reignited concerns that the economy is in recession, analysts at Capital Economics said, adding that economic performance will remain “well below par” while Brexit negotiations drag on.

In commodity markets, U.S. oil prices slipped 0.4% to settle at $52.45 a barrel, their eighth straight day of declines.