No Relief for Big Tech Under New EU Leadership


PARTAGER No Relief for Big Tech Under New EU Leadership

The leadership of the European Union is changing over the next few months, but the organization’s scrutiny of U.S. tech companies likely isn’t.

The incoming head of the EU executive arm is promising new laws on artificial intelligence and the use of big data within 100 days of taking office on Nov. 1, as the bloc’s antitrust enforcer gathers evidence in its probes into the practices of companies including FacebookInc.FB -1.04% and Amazon.comInc.AMZN +0.63%

The EU investigations, started by departing EU competition commissioner Margrethe Vestager, examine how Facebook and Amazon use data gathered on their platforms, and could eventually lead to multimillion-dollar fines. Both companies deny wrongdoing.

In recent years, AlphabetInc. ’s Google has been fined a total of $9.4 billion in three separate EU probes. A fourth, relating to Google’s job-search service, is currently at a preliminary stage.

As the new commission takes shape, President-elect Ursula von der Leyen and her team are sifting through internal proposals for stricter rules in areas from limiting facial-recognition technology to creating a dedicated multibillion-euro fund to prop up the European technology sector.

“There is a frenzy of pitching ideas to her,” said one official familiar with the internal discussions. A spokesman for Mrs. Von der Leyen said she hasn’t signed off on any of the floated plans, as she is still organizing her team of commissioners.

The European Commission, apart from enforcing antitrust rules, is the only EU institution that can put forward new legislation, which is then negotiated and approved by EU governments and the European Parliament. Proposals for new legislation are drafted by its thousands of staffers divided into various policy departments, much like ministries in a national government.

The tech companies have said they generally welcome greater oversight, though with varying degrees of enthusiasm. AppleAAPL -1.83% Chief Executive Tim Cook in Brussels last year attacked the “data-industrial complex” and advocated for tighter privacy regulation, while Facebook has touted its new efforts to police the content on its site.

“We want to work with governments and policy makers to design the sort of smart regulation that fosters competition, encourages innovation and protects consumers,” said a Facebook spokeswoman.

Mrs. Von der Leyen, the former German defense minister, in addressing the European Parliament before her confirmation hearing in July, said she was in favor of fair taxes on tech giants that “barely pay any taxes because they play our tax system.”

If tech companies “want to benefit [from Europe], they have to share the burden,” she said. France recently approved a tax on large tech companies, and governments world-wide are trying to negotiate international standards.

Tech companies, for their part, say they are being singled out and argue all businesses should be treated equally. “For tax reform to be ambitious and fair, it needs to be global and cover all industry sectors,” said Christian Borggreen, vice president for Europe at the U.S.-based Computer & Communications Industry Association, a trade group that includes Google, Facebook and Amazon.

Mrs. Von der Leyen’s agenda for the next five years, which she published in July, includes proposals for policy areas including climate, defense and rule of law but puts particular emphasis on regulating artificial intelligence.

New rules on AI and big data, her agenda said, should follow the “European way, balancing the flow and wide use of data while preserving high privacy, security, safety and ethical standards.” 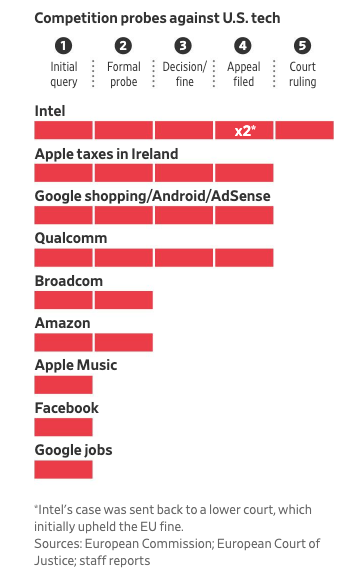 Europe already has made its privacy standards—included in the General Data Protection Regulation—a model for many countries, Mrs. Von der Leyen said. German Chancellor Angela Merkel in June said “it will be the job of the next commission to deliver something so that we have regulation similar to the GDPR that makes it clear that artificial intelligence serves humanity.”

EU officials propose to potentially restrict the use of facial-recognition technology and to oblige companies by law to flag whenever a phone call or chat is made by a robot or an algorithm. New legislation also could make platforms liable for self-learning algorithms that start making their own decisions. A system of certification could be implemented for uses such as self-driving cars or medical robots.

Companies, such as Amazon, developing facial-recognition technology, say regulation shouldn’t go too far. “New technology should not be banned or condemned because of its potential misuse,” Michael Punke, vice president at Amazon Web Services wrote in a recent blog post. Mr. Borggreen, of the CCIA trade group, also said that “too often the EU has prioritized tech regulation over tech innovation. Hopefully, the new EU leadership will regulate based on fact, assessment and stakeholder consultation.”

Mrs. Von der Leyen pledged to prioritize investments in AI, through direct EU funding and increased public-private partnerships. Many ideas for how to accomplish this are under debate. One draft paper compiled by commission officials suggests creating a €100 billion “European Future Fund” to back Europe’s companies versus U.S. and Chinese rivals, though a commission spokeswoman described the proposal as an “internal brainstorming document,” which doesn’t have political backing.

Mrs. Von der Leyen’s agenda also mentioned upgrading safety and liability rules for digital platforms, services and products and for completing the EU’s proposed “digital single market,” which would eliminate internet barriers within the bloc just as the EU’s single market has already done for goods and services. EU cyberspace is currently divided by a patchwork of national regulations.

In one paper reviewed by The Wall Street Journal, commission officials dealing with digital issues flag several areas where the lack of unified EU rules bring additional costs to companies and hamper the takedown of illegal content.

“The absence of clear, uniform, and updated rules in areas such as illegal content online is dissuasive for new innovators,” the paper reads. “This is a major strategic weakness for the EU in the digital economy and increases reliance on non-EU services.” The proposed solution is to harmonize rules across the bloc and create a dedicated regulator to ensure oversight and enforcement, including by issuing fines.

But even before all these new rules come into force—which could take several years of negotiations with national governments and the European Parliament-—existing and new antitrust probes could hit U.S. tech companies with more multibillion-euro fines. EU antitrust officials have said they are willing to share documents and help out their U.S. counterparts, as the Justice Department is investigating several tech giants.

Ms. Vestager, the outgoing competition commissioner, will be promoted in the new commission to become one of Mrs. Von der Leyen’s top deputies. Several preliminary investigations her competition team began could advance, including ones into Google’s job-search service, Facebook’s use of data and its planned cryptocurrency, Libra, and a complaint lodged by music streaming service Spotify AB against Apple Music. The companies deny any wrongdoing.Apple said Spotify aims “to make more money off others’ work.”

Amazon and U.S. chip maker Broadcom Inc. also await final judgments in competition investigations started under Ms. Vestager. Amazon has said it is cooperating with the commission, and Broadcom has said the investigation is without merit.