U.S. manufacturers are investing less in their factories and workforces as the trade dispute with China makes it more difficult for executives to anticipate costs and demand.

The shifting contours of the tariffs that the U.S. and China have applied to each other’s goods are prompting some companies to put business plans on hold. Others are cutting back investments as trade volumes and economic growth slow around the world.

These companies are buying fewer machines for their factory floors and shortening shifts. The knock-on effect means lower sales for those suppliers and less pay for workers, contributing to slower U.S. economic growth.

“You have a cloud of dust out there, and you are trying to see clearly through it,” said Paul Reitz, chief executive of heavy duty tire maker Titan International Inc. “It’s tough to do.” 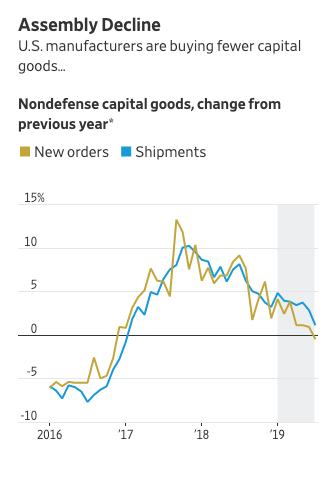 Mr. Reitz recently delayed buying new machinery for some of Titan’s six U.S. factories. He said sales could be flat or negative this year, down from the 10% annual growth he expected heading into 2019. He is considering reducing shifts or laying off workers.

Truck maker Navistar InternationalCorp.NAV 4.06% said Wednesday that it expects to spend $115 million on capital projects this year, down about 25% from its previous forecast after truck orders slowed sharply in recent months. CaterpillarInc. ’s capital expenditures dropped 16% in the quarter ended in June from that period a year earlier. And Illinois Tool WorksInc. said business uncertainty reduced demand for its welding, measurement and other equipment in the second quarter. The company spent $154 million on additions to its plants and new equipment in the first half of the year, down from $181 million in the first half of 2018. 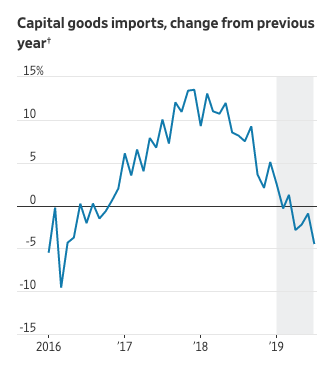 Some manufacturers see benefits from rising tariffs. Wenger Manufacturing Inc., which makes equipment for producing breakfast cereals and meat substitutes, is getting more orders from customers in countries like Australia and New Zealand that are selling products in China without paying tariffs, said Dennis Funk, a vice president of the Sabetha, Kan., company. 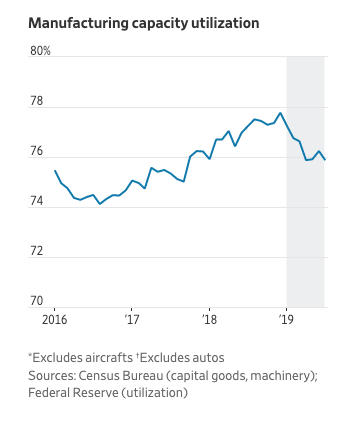 “Talks with China are continuing, but there is no doubt that President Trump will continue to use every available tool to level the playing field for American workers and reduce barriers to the export of our goods and services,” Mr. Deere said.

Overall, manufacturers are investing less. U.S. imports of capital goods fell in July to the lowest level since 2017, according to the Census Bureau. That contributed to a narrower U.S. trade gap that month as manufacturers bought less machinery and supplies, the Commerce Department said Wednesday. New orders for capital goods posted their first year-over-year decline in three years in July.

The downturn in capital spending has meant less demand for the equipment IPEG Inc. makes for plastics manufacturers. Chief Executive Chris Keller said orders have softened since July as the trade war has intensified and concerns about the economy have grown.

GHL International Inc.—which makes popcorn poppers, cat litter and other products—said tariffs on its goods made in China, such as water fountains for pets, have cut up to $200,000 from its profits each month. The company said it has delayed a $4 million investment in its factory in Cedarburg, Wis., that would add at least 40 jobs because of the uncertainty and reduced profits.

“You can’t play roulette. You can’t gamble with 30 years of work,” said John Lipscomb, chief executive of GHL, which was founded in 1989.

Neenah Inc., which makes envelopes, filter components and other goods, is seeing lower demand for its industrial products in the U.S. and lower sales in China as customers switch to local suppliers and the weaker yuan makes its products more expensive there, Chief Executive John O’Donnell told analysts last month.

The Atlanta-based company is cutting capital expenditures to about $30 million this year from $38 million in 2018 and spending mainly on maintenance and on products that will reduce costs over time.

Some executives say President Trump has exacerbated the uncertainty by making impromptu changes to trade policy. Mr. Trump said on Twitter on Aug. 30 that “badly run and weak companies” are blaming tariffs for their business failings.

Herb Kimiatek, president of Kimson Chemicals Inc., has a shipment of his products coming to the U.S. from China and doesn’t know how much of a tariff will be applied when they arrive. He thinks his products will face a tariff of either 25% or 30%.

Others say the shifting policies have left them unsure of which products will face tariffs and how much they’ll have to pay. Thousands of requests have been filed for exemptions from tariffs on products from China. About 23% of the earlier requests have been granted, according to the Office of the United States Trade Representative, and many are still pending.

Mpowerd Inc., which makes solar-powered lanterns in China, is paying U.S. tariffs on many of its products. That has delayed hiring and product launches as employees focus on negotiating price increases with retailers in the U.S. and look for alternative suppliers.

John Salzinger, a founder of Mpowerd, said the way Mr. Trump and the federal government have communicated policy changes has amplified his frustrations.

“Not just the increase but the way in which it has been deployed. I’d call it sloppy at best,” he said.