The European luxury conglomerate behind Louis Vuitton and Bulgari is taking over Tiffany & Co.TIF -0.78% in a more than $16 billion gamble that it can restore shine to the famed jeweler.

LVMH Moët Hennessy Louis Vuitton SA said Monday it had reached an agreement with Tiffany that values the U.S. company at $135 a share, a day after The Wall Street Journal reported that the companies had reached a preliminary agreement.

The $16.2 billion deal gives LVMH a classic American brand that has struggled with weak demand at home and abroad. It is also a bet on China’s economy and its consumers, whose fast-rising incomes have made them the luxury industry’s most important customers. In search of growth, Tiffany is building flagship stores in several Chinese cities.

The acquisition is the biggest yet by LVMH under Bernard Arnault, the French billionaire who has been the luxury group’s chief executive and controlling shareholder for three decades. It tops the $13 billion Mr. Arnault paid in 2017 to bring all of the French fashion house Dior under the ownership of LVMH.

LVMH, which owns 75 brands, has become one of Europe’s most valuable companies worth $220 billion by creating a mass market for luxury goods. Louis Vuitton, which by some estimates accounts for one-quarter of the Paris-based company’s revenue, sells leather goods starting at a few hundred dollars in more than 450 stores world-wide.

Tiffany, which sells silver bracelets for a few hundred dollars as well as diamond engagement rings for tens of thousands of dollars, has more than 300 stores globally and about $4.4 billion in annual revenue. It gets nearly $2 billion of its sales from Asia and its flagship Fifth Avenue store is popular with tourists.

The 182-year-old brand has been trying to rebuild its business after ousting its chief executive two years ago amid pressure from an activist investor. Under CEO Alessandro Bogliolo, Tiffany has pushed an expansion into China, and branched into fashion jewelry, hoping to attract a younger and more international clientele.

Tiffany executives were open to a deal, figuring that they could execute their turnaround strategy better as a private company with LVMH’s support, one of the people said. 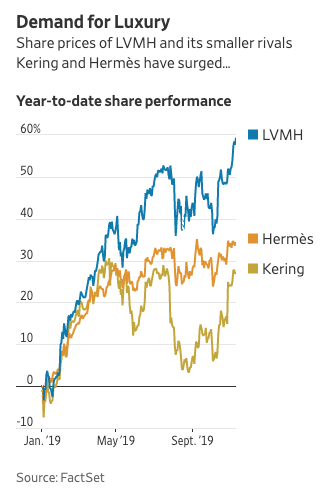 However, they felt that LVMH initially lowballed with a $120-a-share offer. In recent weeks, discussions between the two sides centered on establishing a fairer price for the historical value of the Tiffany brand and its reputation, according to the people familiar with the matter.

Shares of New York-based Tiffany have surged on hopes of a deal at a higher price, closing Friday at $125.51. The shares peaked near $140 in the middle of last year. The Financial Times earlier reported that a deal was close.

Buying Tiffany would increase LVMH’s exposure to jewelry, one of the fastest-growing businesses in the luxury sector. Along with Tiffany rival Bulgari, LVMH also owns luxury watchmakers Hublot and TAG Heuer. 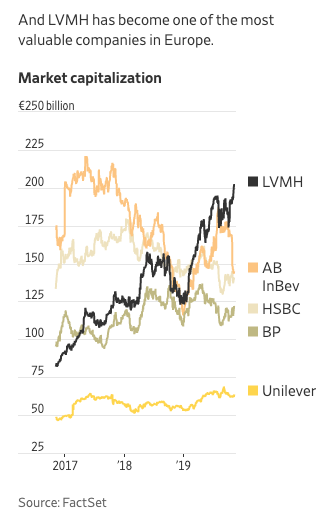 The conglomerate has for years sought to boost its presence in jewelry, which is one of LVMH’s smallest divisions. Tiffany is one of the few brands that has the size to move the needle for LVMH. Its executives like the jewelry business because it has steep barriers to entry, insulating big manufacturers from upstart competitors, people familiar with the matter said.

LVMH executives view Tiffany as a “sleeping beauty,” a brand with great promise, but one that sat out the recent uptick in the jewelry market, according to people familiar with the situation.

They plan to increase marketing at Tiffany and provide more cash to accelerate its existing strategy, which includes launching more new products, upgrading boutiques and making the brand more appealing to millennials, the people said.

Although many of the products Tiffany sells aren’t as high-end as those sold by Bulgari or other European luxury jewelers, LVMH views its wide range of prices as a good way to attract younger shoppers, the people said.

As part of LVMH, Tiffany would be relieved of the need to report back to shareholders every quarter, giving executives time to implement a turnaround. LVMH doesn’t disclose the performance of individual brands.

The conglomerate, which has about $50 billion in annual revenue, would use the large profits generated from its powerhouse brands—principally Louis Vuitton—to fund the big investments that will likely be needed to reinvigorate Tiffany.