VENICE BEACH, Calif.—On a recent afternoon, a gymnast balanced on his hands atop a third-floor balcony railing overlooking the sidewalk.

A woman recorded the stunt on a smartphone, hoping to capture a this-is-crazy-style video that millions of people will share. That’s the kind of work done all day at 421 Media, a well-funded content firm that produces memes for consumers of Instagram, the social-media platform that in less than a decade has exceeded 1 billion monthly users.

Instagram is part of FacebookInc.FB -1.67% ’s social-media empire, and its continued growth is essential to the parent company. Yet the platform has grown so big, so fast and so commercial that it risks losing the stylish and intimate aesthetic that made it wildly popular.

In its rise from a picture-sharing app buoyed by photography buffs to a slick world of celebrity endorsers and influencers, Instagram has spawned a behind-the-scenes industry that brokers content and followers to sell sponsored posts. Meme factories—creators of posts designed to go viral—are reshaping how Instagram content is made, following social media’s basic formula: More shareable content yields more followers, which makes more money.

Like others in the Instagram economy, 421 Media harnesses a stream of popular posts. To supplement its original content, staffers trawl Instagram and other social media sites for funny, cute or sexy posts they can recycle on accounts 421 controls, such as @pups, @funniest and @tat.

On a typical day, 421’s staff of about 30 workers churn out dozens of posts from more than 100 Instagram accounts with a total reach of around 300 million followers—more than celebrity Instagram stars Beyoncé and Kim Kardashian West combined. 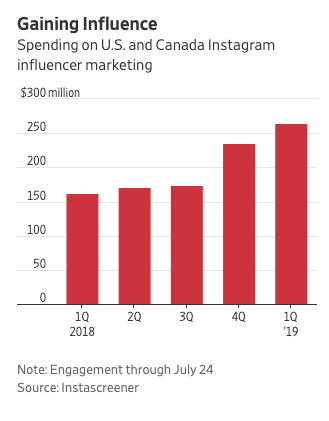 Advertisers on these sites pay by the eyeball—an estimated $373 million on influencer marketing in the U.S. and Canada in the first quarter of 2019, according to Instascreener, which tracks marketing on Instagram. About $265 million of that was on Instagram, up 62% from the same period a year earlier.

Done well, the marketing appears more authentic than glossy media campaigns on TV or in magazines. Done poorly, it comes across as mass-produced, tarnishing the platform’s appeal and driving away users.

Whether to tightly regulate the Instagram market of paid endorsements was “one of the toughest questions we had to face,” Instagram co-founder Kevin Systrom said at a conference in March, discussing his decision to leave the company last year.

“I guess we made the decision that we were going to have the wait-and-see approach,” he said. “The thing I’m bummed about is Instagram feels less authentic over time because of it.”

Instagram’s health is central to Facebook’s business. When Instagram launched in 2010, its novel use of photo filters allowed users to choose flattering lighting and effects. People got in the habit of returning to the site again and again, often just to see how many likes their images collected.

Among young people, Instagram was seen as an entertaining rest stop on social media, without the name-calling and political minefields of Facebook.

Impressed by the app’s rise, Facebook Chief Executive Mark Zuckerberg oversaw a deal to buy it in 2012 for about $1 billion. The price raised eyebrows at the time, but it is now seen as a bargain.

Instagram accounts for 22% of Facebook’s total ad revenue, according to estimates by Andy Hargreaves, an equity research analyst with KeyBanc Capital Markets Inc. Revenue at the app is growing faster than its parent company and accounts for about 54 cents of every new ad dollar at Facebook, he estimated.

If Instagram were its own company, it would fetch a valuation of $200 billion, said Youssef Squali, lead internet analyst at investment bank SunTrust Robinson Humphrey . That is a massive chunk of Facebook’s approximately $536 billion market capitalization. It also means the platform would be more valuable than Netflix Inc., Citigroup Inc. or Anheuser-Busch InBev SA.

The app allows the company to span the gap between Facebook’s graying parents and their teenage and 20-something children, who largely prefer Instagram. In turn, Instagram has thrived under Facebook’s ownership.

Facebook’s algorithms determine what images to show Instagram users, serving them more of the type of content their viewing history shows they prefer. Instagram can be addictive, in part, because the app knows what you like.

Instagram has rules to prevent its platform from turning into a marketing free-for-all. Buying and selling accounts is prohibited. Advertising must be disclosed, and no reposting the content of others without permission.

Enforcement has been spotty. People who run large accounts say Instagram has a tolerant approach, reflected in the aggressive and lucrative environment where 421 and scores of similar operations thrive.

Accounts controlled by 421 produce content that is fluent in online youth culture, everything from puppies to melted cheese, said Roni Eshel, a former professional surfer and co-CEO. Sony , Paramount and Amazon Studios are among the firm’s advertisers.

When one 421 account praises a product or movie, other company-controlled accounts pile on their own choreographed enthusiasm. Such artificial responses are at odds with the platform’s ethos of originality.

The company said it has become more careful about its content, acknowledging earlier mistakes. “Our goal is to advertise at the highest level,” said Gregg Colvin, the co-CEO of 421 and a former senior executive at ad agency Universal McCann.

Social media has had little incentive to crack down while the money is flowing, especially since it is impossible to know how long a network will remain hot. The more user views across an app, regardless of content authenticity, the more it can charge advertisers.

“There is a natural half-life for social networks,” since what is popular for one generation usually isn’t for the next one, said Eric Kim, co-founder of Goodwater Capital, a venture-capital firm that focuses on consumer internet companies, including social media.

Instagram’s head of product, Vishal Shah, said the platform was trying to balance enforcement of its rules with users’ freedom to determine quality. “People are the best judge of what makes sense for them at the end of the day,” he said. “We try to keep a close eye on what exactly the ecosystem is trending toward without saying where it should go.”

Mr. Shah said the platform can’t, however, allow marketing built on purchased accounts, borrowed content or undisclosed ads. The company has removed accounts for violations, including one of 421’s that had 7 million followers; 421 believes it wasn’t warranted.

An Instagram spokeswoman said the company also deletes accounts, likes and comments that are falsified.

Sony and Disney needs to work out on a deal already! Spider man out here struggling for a job now 😥

Facebook executives have learned about brand fragility. While the company’s flagship platform remains a powerhouse, user growth has slowed after negative headlines over its policing of misinformation and privacy protections.

For Instagram, the risk ahead is alienating users who suspect the content and personalities aren’t genuine, that the platform is no longer an oasis of originality. “The perception that everything on the internet is fake is becoming more and more popular,” said Sean Spielberg, co-founder of Instascreener, an influencer analytics tool.

About 75,000 people this summer flooded the Anaheim Convention Center in Orange County, Calif., to learn about making money on Instagram, YouTube and other social media platforms.

A session devoted to Facebook had more chairs than people. Elsewhere, an overflow crowd of several hundred people, including social-media influencers and ad executives for major brands, lined up for a panel featuring an Instagram executive giving tips on how to “stand out.”

Aspiring influencers hope to match the success of such celebrities as Ms. Kardashian West, who charges several hundred thousand dollars for a single post. That figure was gleaned from a lawsuit her company, Kimsaprincess Inc., filed against a brand, alleging misappropriation of her image.

Up-and-coming influencers can command $100 to $5,000 a post, according to Kamiu Lee, CEO of influencer platform Activate.

While working at his parents’ gas station after high school, Faisal Shafique, now 26 years old, started @Fact, which posts strange-but-true factoids on Instagram. With 7.4 million followers, the account is the most successful in the network he created that includes @epic, @ghetto and @clothes.

Ads for direct-to-consumer fashion brands, mobile games and diet teas help provide him and his brother with low six-figure incomes. He sometimes works 17 hours a day, he said.

Others have found shortcuts. Amber Faust posts about parenting and her family from Hilton Head Island, S.C. She discovered that some of her influencer friends gained massive Instagram followings through so-called giveaways. Ms. Faust said she felt compelled to try: “I wanted to get huge.”

The influencers pool money to buy a prize, often a coveted designer purse. Each influencer instructs their fans to follow the accounts of all the influencers who put up the prize money. That makes them eligible to enter the prize raffle.

Instagram has no rule forbidding the giveaways, but Ms. Faust said it felt like a scam. Many of her new followers didn’t engage in her posts, she said, and seemed interested only in the prize raffle. She has since quit them.

Industry trade groups are trying to create their own rules and best practices for influencers and content creators. Guidelines, written by influencer-marketing platform Captiv8 and leaders from such major ad buyers as Clorox , StubHub and Publicis Media, say brands should try to better identify fraud.

A meme is born

Matt Fine, 27, started posting about food after he lost more than 100 pounds. When he took over the food pages at 421, he made videos of food vendors preparing servings at the eponymous music festival in California’s Coachella Valley. The posts, which included a churro ice-cream sundae, got 2.5 million views.

Salvatore DiBenedetto, 20, built a large following by buying and selling Instagram accounts, including one he created, @wastedoninstagram. Mr. DiBenedetto sold accounts to 421 for $120,000.

The company said it complied with Instagram’s rules by buying companies that own the Instagram accounts, an investment of tens of millions of dollars. Sometimes, 421 hires creators of the accounts it acquires.

The firm is bankrolled by Ms. Eshel and her husband, venture capitalist Dovi Frances, and others. The company’s goal is to expand 421’s network of followers and attract more advertisers by offering a menu of custom marketing plans.

If a Hollywood studio, for instance, wants to flood Instagram with promotions for a coming movie, 421 can tap tens of millions of users from accounts it controls. A person familiar with one movie studio said 421’s ads were cheaper than other marketing when considering the number of people they reach.

For niche advertisers, 421 can pinpoint a narrow slice of a market.

Mr. Colvin acknowledged that 421 had used posts in a way that violated copyright protections and failed to disclose online ads. He is working with his staff to make sure that doesn’t happen anymore, he said.

Mr. Shah, Instagram’s head of product, said the company was working to enforce more of its rules. “It’s certainly not authentic if the content is being recycled, whether from Instagram or elsewhere,” he said of content in general.

Whether 421 can keep people coming back, and for how long, weighs on investors. “What keeps me up at night is that the content will not be good enough,” Mr. Frances said.