SHENZHEN, China—Huawei Technologies Co.’s smartphone sales are surging in China as a patriotic buying spree helps to blunt the impact of widening U.S. restrictions on the telecommunications giant.

Huawei’s share of smartphone sales in China soared by almost a third to a record 38% during the second quarter, according to market-research firm Canalys. All of Huawei’s major rivals, including Apple Inc. and XiaomiCorp.1810 1.36% , lost ground in the period.

Booming domestic sales are, for now, helping the world’s No. 2 smartphone maker offset flagging shipments overseas, which have been hurt by concerns over the U.S. ban on sales of U.S.-sourced technology to the Chinese company. 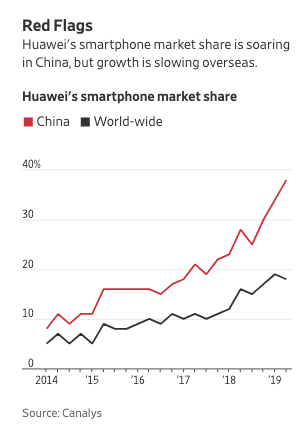 Outside of China, Huawei’s second-quarter year-over-year smartphone shipments fell in most key markets including Europe, the Middle East and Southeast Asia, according to Mo Jia, a Canalys analyst. And Huawei shipments to both the United Arab Emirates and the U.K. fell by about 80% in June compared with April, he estimated.

“Huawei is being forced to switch its focus back to China,” Mr. Jia said. “Of course, China is safer for Huawei. Its brand image is No. 1.”

The U.S. campaign has inspired an outpouring of support for Huawei from Chinese companies like Xinye Lubricating Oil in Puyang, Henan Province. The lubricant company posted onWeChat that it would award 500 yuan—about $72—to any employee who switches from an iPhone to a Huawei device, which cost an average $901 in the first quarter in China, according to Canalys.

“As a patriotic company, our company strongly supports domestic brands,” the company said on May 18.

Around the same time, Days Hotel & Suites in Changsha, in Hunan Province, offered a reward of 200 yuan to all employees using a Huawei phone.

“Behind the U.S. blockade of Chinese products and enterprises is an alert and resistance to the growing strength of China’s innovation,” the company said on WeChat.

Huawei’s main worry: its ability to maintain access to Google’s Android operating system and suite of popular apps. While Android is an open-source software, a loss of access would prevent Huawei users from accessing Google apps including Gmail and Google Maps.

The Trump administration has been encouraging U.S. companies to apply for licenses to restart sales to Huawei; an export license for Google would likely stanch Huawei’s overseas declines. Google has been providing some services to Huawei under a temporary license that is set to expire Aug. 19, marking a deadline of sorts for the companies.

It helps that consumers in China aren’t very dependent on Gmail, Maps or other Google apps because of the popularity of Chinese social-media apps such as WeChat. And China blocks most Google services in favor of domestic alternatives.

Even if there is no hiccup in Google services related to the export license, analysts warn the U.S. blacklisting could still do lasting damage to the Huawei brand overseas. 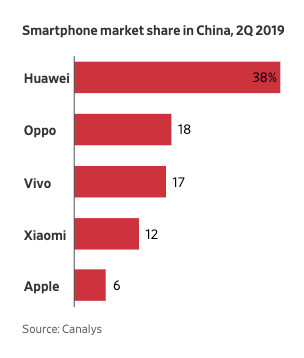 Huawei’s smartphones made global inroads because of their combination of high-end photography and affordable prices.

Globally, Huawei jumped from the No. 4 vendor of handsets in 2014 to No. 2 in the first half of 2019, ahead of Apple and behind Samsung Electronics Co. , according to Canalys.

The blacklisting has caused Huawei executives to postpone beyond this year a longtime goal of becoming the world’s top smartphone vendor.

Analysts said if Google, a unit of Alphabet Inc.,doesn’t get Commerce Department clearance to continue working with Huawei, the Chinese company’s overseas smartphone sales could collapse.

“I think the foreign carriers will stop buying Huawei phones once they know they cannot have access to Google apps and Android,” said Edison Lee, a telecom industry analyst at the investment bank Jefferies.

In recent months, many Chinese have taken to social-media websites to vent anger at the U.S., while snapping up Huawei devices.

“The U.S. has contributed greatly to brand building and the corporate image of Huawei,” said Fang Zheng, a 26-year-old manager based in Tianjin, a port city in China’s northeast.

“I think the United States is very ridiculous,” he said.

Huawei on its sprawling Shenzhen campus has adorned coffee shops and conference rooms with black-and-white photos of a bullet-riddled Soviet warplane alongside the words: “Without a lot of scars, there is no thick skin.”

“We are now fighting for survival, while also fighting for growth,” Huawei Chairman Howard Liang said at a news conference Tuesday.

Huawei’s domestic smartphone boom helped boost its first-half revenues by 23%, but company executives said they anticipate a more challenging second half of the year.

Consumer-device sales contributed 55% of its $58 billion in revenue during the first half.

Huawei shipped 188 million smartphones in the first half of the year, a 24% increase from a year earlier.

Mr. Liang said Huawei still doesn’t have access to some “key components and products,” an apparent reference to Android. The temporary license for Google to provide services to Huawei is limited in scope.

Though Huawei is developing its own operating system, called “Hongmeng,” executives said it wasn’t originally designed for smartphones.

— Xiao Xiao contributed to this article.