People check out the new iPhone at an Apple store in Shanghai. Apple and Microsoft have helped buoy the broader technology sector while they vie for the title of largest U.S. firm.

How Apple and Microsoft Dwarf the Rest of the Market


PARTAGER How Apple and Microsoft Dwarf the Rest of the Market

The two largest U.S. companies helped lift the Dow industrials above 28000 for the first time earlier this month

Apple and Microsoft helped lift the Dow industrials above 28000 for the first time earlier this month, a milestone that underscored how much the two largest U.S. companies influence major stock indexes.

Boosted by optimism about a U.S.-China trade deal and sturdy profit growth, the companies have helped buoy the broader technology sector while they vie for the title of largest U.S. firm. Apple shares have soared 66% this year, pushing it ahead of Microsoft with a $1.16 trillion market value. Revenue growth in Apple’s services business and products outside the iPhone have fueled fresh enthusiasm for the stock. 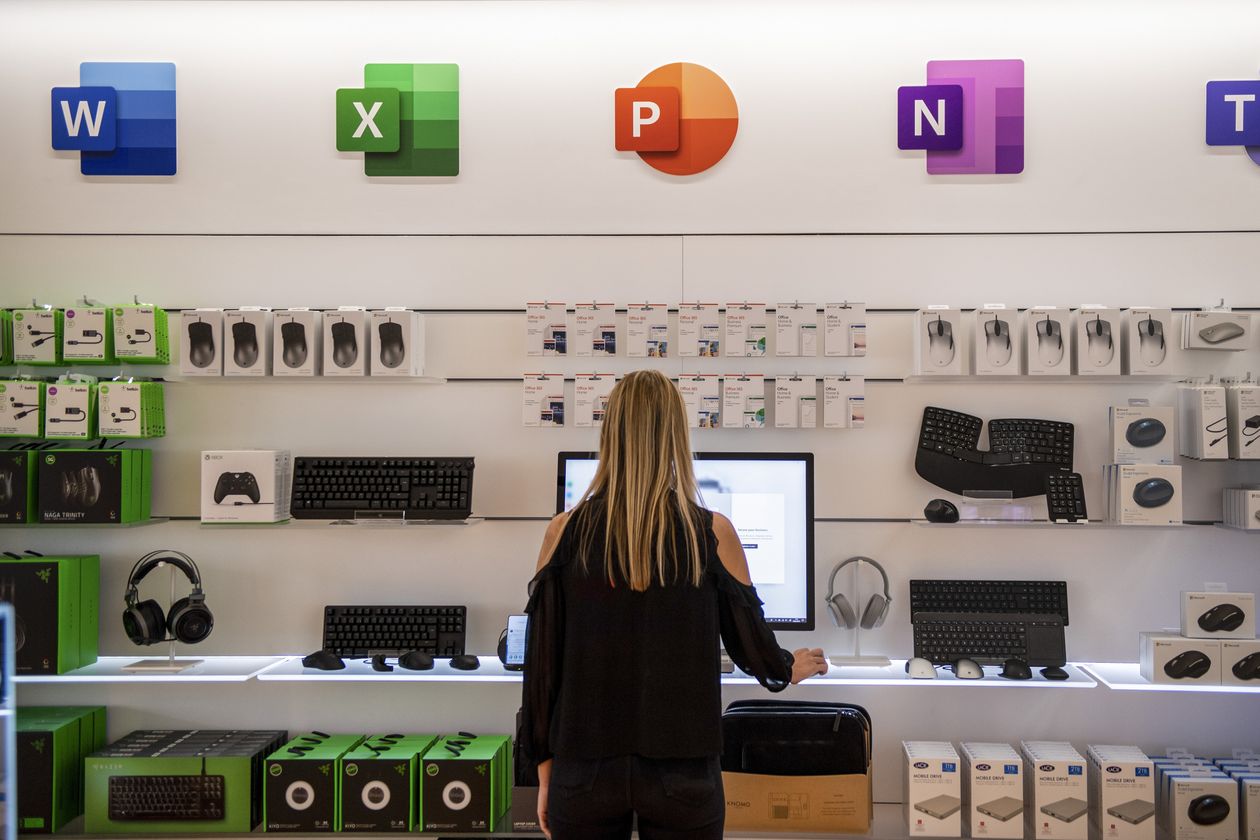 Even though it has fallen behind its rival in market cap, Microsoft has still had a banner year, with shares rallying 47% to give the software giant a market value of $1.14 trillion. Strength in the company’s cloud-computing segment have helped the Redmond, Wash., company offset slower growth elsewhere.

With a combined market value of more than $2.3 trillion, Apple and Microsoft now tower over much of the market and have surged ahead of rivals like Google parent Alphabet Inc. and Amazon.com Inc.

Here’s a look at just how influential the pair has become:

With the S&P 500 energy sector trailing the broader market as oil and gas prices stagnate, Apple and Microsoft together are now twice as large as the entire energy group. The sector includes stalwarts such as Exxon Mobil Corp. and Chevron Corp. but is down more than 9% in the past year, with investors expecting steady production from the U.S. and elsewhere to curb gains in oil and natural gas. 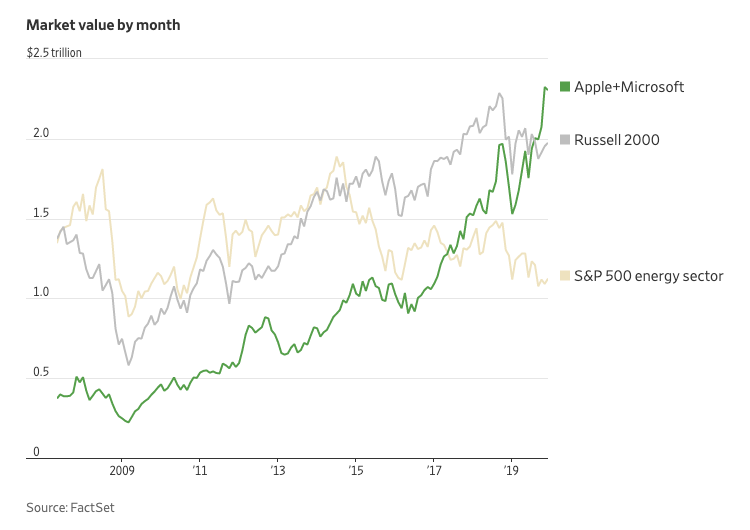 Top of the Heap

Apple and Microsoft together are larger than five entire S&P 500 sectors. 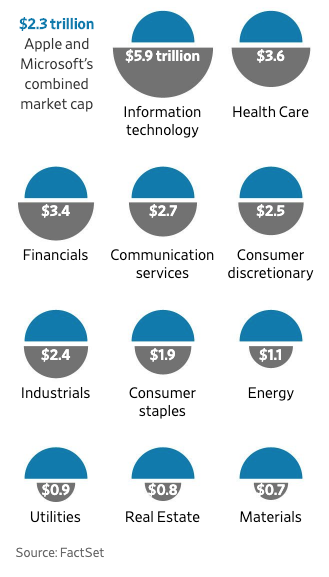 The tech duo has also eclipsed the combined market size of all the companies in the Russell 2000. The gauge of small-capitalization companies has risen 18% this year, compared with a 24% rise for the S&P 500. The Russell slid alongside banks and shares of other economically-sensitive companies earlier in the year, though so-called cyclical areas of the market have rebounded recently.

Together, Apple and Microsoft are also larger than the 197 smallest companies combined in the S&P 500, according to Dow Jones Market Data. They have also eclipsed the index’s consumer staples, materials, real estate and utilities sectors.

Apple has benefited from consistent revenue gains in North and South America, reflecting a broader trend of sturdy domestic consumer spending boosting stocks even as economic activity elsewhere stagnates. Sales in Apple’s Americas segment have risen in three consecutive fiscal years through September 2019, helping offset declines in the most recent year in Europe, and the company’s Greater China segment of China, Hong Kong and Taiwan. 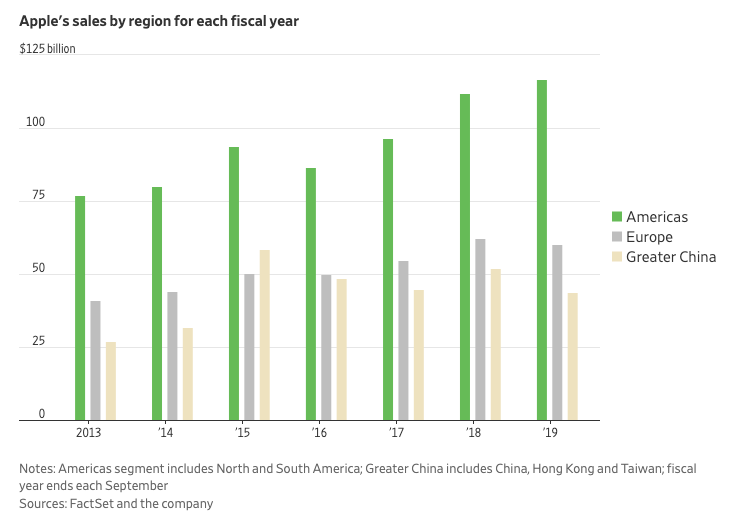 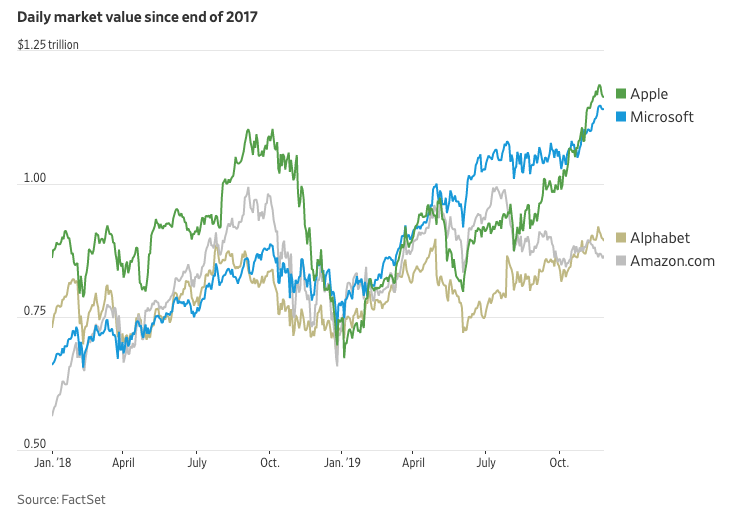 As Apple has relied on strength in its services segment and products outside the iPhone to offset a drop in sales from its flagship product, Microsoft’s cloud-computing group has pushed the stock higher. The segment includes its Azure product line, and the group’s revenue nearly doubled from the 2014 fiscal year through the 2019 fiscal year ended in June. 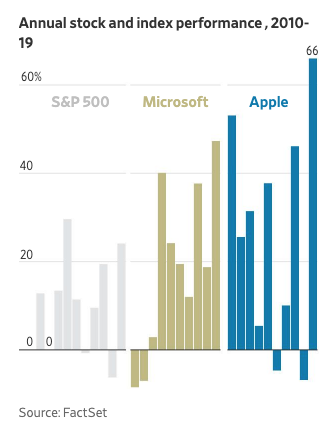 The two largest technology stocks have recently outpaced rivals including Amazon.com and Alphabet, which have lagged behind amid concerns about rising costs and stricter regulations. Amazon shares are up 16% this year, while Alphabet has rallied 24%, putting the pair about $250 billion or more behind Apple and Microsoft in market value.

Despite worries the two tech stalwarts have rallied too far, they are still less expensive than peers such as Amazon based on profits in the past year. Apple is also cheaper than the broader technology sector.

Shares of both Apple and Microsoft are now on track for their best annual performance since 2009. Microsoft is on pace for an eighth consecutive annual rise, bucking declines for the S&P 500 in 2015 and 2018. 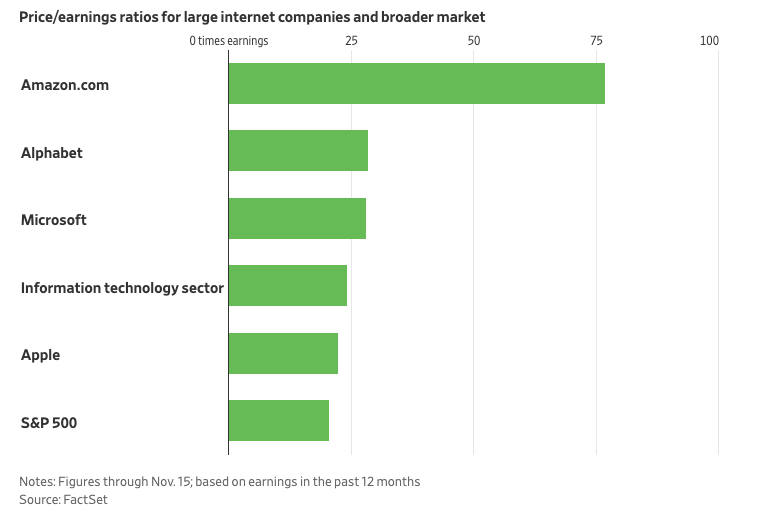 U.K. to Ban Huawei From Its 5G Networks Amid China-U.S. Tensions