The London Stock Exchange criticized the offer from its Hong Kong rival as ‘preliminary and highly conditional.

Hong Kong’s stock exchange made an unsolicited $36.6 billion offer to acquire its London-based rival, a deal that would unite two of the world’s major trading hubs when both are under severe political pressure.

Hong Kong is reeling from a summer of increasingly violent protests, with scenes of tear gas and Molotov cocktails playing out virtually every weekend on live television. London, meanwhile, is gripped by political paralysis as successive governments fail to find a way to implement an exit from the European Union due to take place next month. Bankers in both cities are trying to figure out whether things could get bad enough to force them to move out. 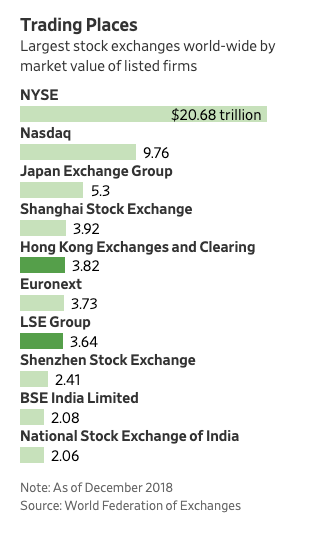 And yet Hong Kong Exchanges & Clearing Ltd. 388 -3.50% has picked this moment to launch what would be its biggest deal. A combination with the London Stock Exchange LSE -0.11% would create a global leader in capital flows and financial data by connecting developed and emerging markets in the East and West. It would also thwart the LSE’s ambitions to transform itself from an exchange into a full-fledged data business by acquiring financial-information provider Refinitiv Holdings Ltd., which used to be part of Reuters, for $14.5 billion in stock.

Data is expected to be a key battleground for exchanges in the coming years as many rethink their historical reliance on listing and trading companies and look for new revenue streams based on the vast amounts of data flowing through them.

The Hong Kong group’s approach and its public announcement Wednesday took the LSE’s leadership off guard, according to a person familiar with the matter.

Deal or No Deal

The London Stock Exchange has been a favorite target and an active acquiror in the deal market, though many attempts failed.

The LSE’s board will determine the company’s next move when it meets, the person said. The date of that meeting couldn’t be learned.

The public disclosure of the offer came Wednesday. The Hong Kong exchange decided to make its offer public so that shareholders of both companies could assess its merits, according to another person familiar with the matter.

“You don’t choose timing, you choose what is the right thing to do,” Mr. Li said during a conference call Wednesday.

The London exchange criticized the offer as “preliminary and highly conditional.” It said it would consider the proposal but remains committed to the Refinitiv deal.

“We are here like a corporate Romeo and Juliet,” Mr. Li, said on the conference call. “We know we were late…We want to openly express our admiration.”

The Hong Kong exchange could face significant political hurdles to completing a deal. A number of transactions have been scuttled by concerns about Chinese access to sensitive data, and financial information is high on the sensitivity index. Hong Kong enjoys significant autonomy from China—with a separate legal system and freely convertible currency—but recent political moves have tested those boundaries.

“Any regulator would need to think carefully about the implications of the political situation and Beijing’s increasing control over Hong Kong,” said David Webb, an outspoken private investor in Hong Kong. “This strikes me as an aspirational proposal that probably won’t go through.”

“This has nothing to do with Hong Kong’s situation,” Mr. Li said.

The Hong Kong exchange said its offer—valued at £29.6 billion in cash and stock—represents a 22.9% premium to the London exchange’s closing stock price on Tuesday. It proposed paying roughly a quarter of the purchase price in cash and the rest in stock.

“This is an audacious move,” said Larry Tabb, founder and research chairman of the financial markets research and advisory firm Tabb Group. “LSE is one of the few really prestigious global exchange brands.”

LSE shares, which have soared following the Refinitiv deal announcement, jumped as much as 16% Wednesday before trimming some gains.

The London Stock Exchange, which traces its history back hundreds of years, has proven one of the world’s most difficult acquisition targets over the past two decades. German rival Deutsche Boerse AG has twice failed to take over the exchange, as has the technology-heavy U.S. exchange Nasdaq Inc. A Swedish exchange and Australian investment bank Macquarie Group also haven’t completed takeovers.

“This deal seems so out of left field, especially after Refinitiv,” said Brad Bailey, research director for capital markets at Celent in New York. “I was very surprised.”

If the Hong Kong exchange’s bid for LSE succeeds, it would create an Asian-European giant that would rival the two biggest players in the global exchange business, both of them U.S. firms: Chicago-based CME Group Inc. and Atlanta-based Intercontinental Exchange Inc., or ICE.

CME has a market capitalization of over $72 billion, while ICE—the parent of the New York Stock Exchange—is worth about $50 billion. Both U.S. firms rode a wave of consolidation in the exchange business over the past two decades to amass more heft than their European and Asian rivals.

Mr. Li, in a blog post on the Hong Kong exchange’s website, said the proposal comes after “many months of consideration” and marks a milestone for the city, which has built itself into a global financial center as China’s economic growth has accelerated. He said a partnership between the two exchanges “will strengthen ties between the U.K. and China, particularly in economic and trade terms.” 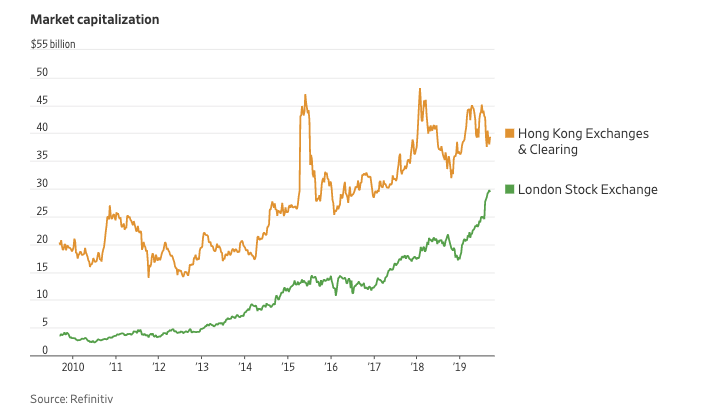 “We are looking forward to further conversations and to take a deeper dive,” Mr. Li said on Wednesday.

The Hong Kong exchange dominates its home market and has thrived by plugging mainland China into the global financial system, initially through hosting stock listings, and more recently through trading arrangements that connect the world’s investors to otherwise hard-to-access markets in Shenzhen and Shanghai.

Last year it made a record profit of roughly $1.2 billion, equal to nearly 59 cents out of every dollar it took in as revenue or in other ways, chiefly as income on investments.

Hong Kong is a crucial throughway for capital flows into and out of China. The exchange was the world’s biggest for initial public offerings last year, lifted by multibillion-dollar share sales by several of China’s most valuable technology and internet companies.

The dollar value of new listings in Hong Kong has shrunk sharply this year, and trading has slowed, as trade tensions, China’s economic slowdown and unrest in the city have dented market sentiment.

Companies raised $9.5 billion via Hong Kong IPOs in the year through Wednesday, or roughly 40% of the total raised in the same period last year, according to Dealogic. In July, Anheuser-Busch InBev SA halted a near-$10 billion listing of its Asian unit, blaming market conditions.

In August, the average daily turnover of securities traded on HKEX fell 8.4% from a year earlier.