Money managers are scaling back wagers on gold, the Japanese yen and other popular havens, betting that the outlook for the U.S.-China trade war and Brexit will continue to improve.

Gold prices are down nearly 4% after hitting a six-year high in September. The yen has given back around half of the gains it made against the dollar since a rise in trade tensions earlier this year sparked a rush for safe assets. Other havens, including the U.S. dollar, Treasurys and the Swiss franc, have also softened in recent weeks.

Gold pared an early climb Friday and the yen edged lower against the dollar after U.S. officials said the world’s two largest economies have made headway in completing the first phase of a trade agreement. U.K. lawmakers endorsed a Brexit deal for the first time last week, though they rejected Prime Minister Boris Johnson’s plan to rush his deal through Parliament.

Are you confident in on global trade deals? Why or why not? Join the conversation below.

More investors also believe that the Federal Reserve’s easier monetary policy is starting to work its way through the U.S. economy, mitigating concerns about weak economic data and the impact of trade fights on growth and corporate earnings. The Fed cut rates twice this year, and many expect the central bank to do so again at its meeting this week.

“There isn’t the same urgency to have these assets at the moment,” said Bart Melek, head of commodity strategy at TD Securities. “We’re happy to sit on the sidelines for now and see what happens.” 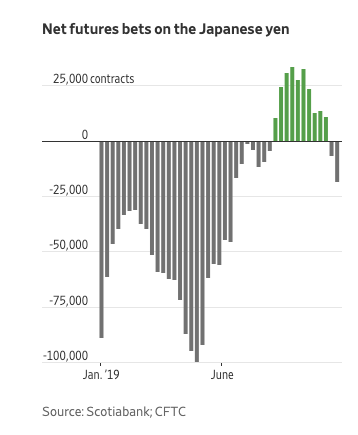 Mr. Melek last week advised certain clients to sell gold in a “tactical retreat.” His recommendation to buy came at the beginning of March, when prices for the metal were nearly $200 lower.

Some investors have also increased their positions in comparatively risky assets, even as they remain cautious over slowing global growth, an aging U.S. bull market and potential reversals in tariff talks or Brexit negotiations.

That includes the British pound, which is up nearly 7% from September’s multiyear lows and has been one of the world’s best performing currencies over the last few weeks. The Korean won, which had been hurt by the country’s reliance on China as a market for its exports, is up more than 8% against the dollar in the last month.

David Coombs, London-based head of multiasset investments at Rathbone Investment Management, has started increasing his exposure to U.K. stocks in recent days, after years of limiting his holdings due to concerns over Brexit. 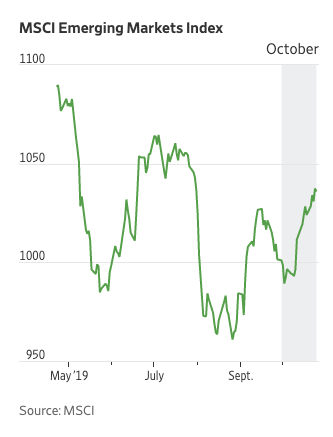 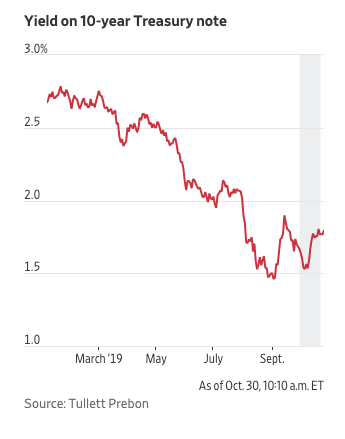 “That’s not an eyes-out, all-on-red risk on but I’m feeling more positive than I was a week ago,” Mr. Coombs said.

Signs of market participants embracing risk more broadly include a rally in beaten up emerging-market stocks and a more recent upturn in copper and oil, which have suffered from worries over weak demand and excessive supply.

Few investors are abandoning their haven holdings completely. Net bets on gold in futures markets remain near recent highs, a testament to how investors have come to expect snags in both trade negotiations and Brexit. 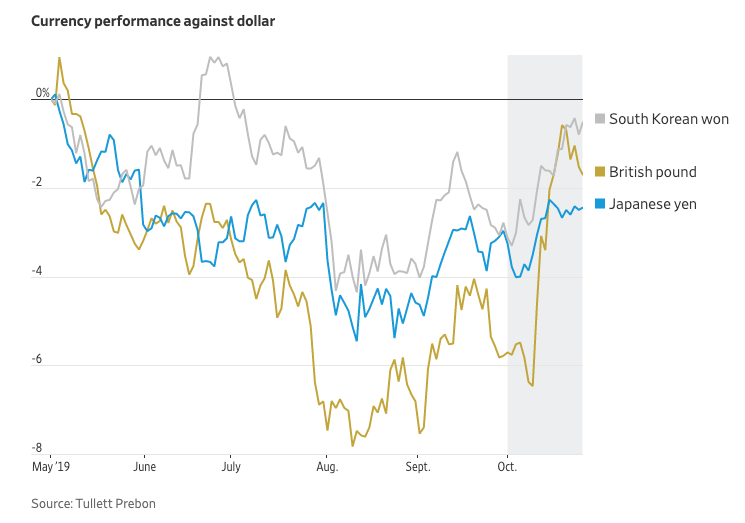 Gold prices moved higher and the pound fell against the dollar on Thursday after Mr. Johnson called for a snap general election to take place on Dec. 12, saying one was needed to ensure his Brexit deal goes through.

And good economic news continues to be hard to come by, especially outside the U.S. Business activity in the eurozone was close to stagnation in October, while it declined in Japan, data showed last week, suggesting that a wave of interest-rate cuts by leading central banks over recent months has yet to turn around a slowing global economy.

Still, some investors are betting that the worst may be over. Hani Redha, London-based multiasset portfolio manager at PineBridge Investments, has recently pared his fund’s position in debt instruments like bank loans and investment-grade collateralized loan obligation. He has also purchased equities tied to emerging markets such as China, Brazil, South Korea and India.

A more optimistic view on the trade talks between the U.S. and China has been a key reason for his recent moves, Mr. Redha said.