• Euro slips against the U.S. dollar

Global stocks retreated amid fading optimism around U.S.-China trade negotiations as the two countries signaled an agreement remained out of reach.

On Friday, Chinese negotiators abruptly canceled a trip to farms in Montana and elsewhere. President Trump also rejected suggestions the U.S. would accept a partial trade agreement with China, saying his administration is “looking for a complete deal.”

“I think this is the case of, well, we had the promise of more talks but where do we go from here?,” said Chris Beauchamp, chief market analyst at online trading firm IG Group

European stocks were also hit by weaker-than-expected manufacturing and services data for France, Germany and eurozone countries. The euro fell 0.4% against the U.S. dollar, and the yield on the German 10-year bund dropped to minus 0.574% as investors reached for safe government bonds.

The Stoxx Europe 600 fell 0.8% in morning trade, with the banking and autos sectors each down 2.3%, after a broadly lower session in Asia.

“Germany’s in recession. I think that’s pretty much a stone-cold fact,” said Claus Vistesen, chief eurozone economist for Pantheon Macroeconomics. There were also signs that weakness in eurozone manufacturing was spilling over into services, which will likely lead to slowing employment and rising unemployment should the trend continue, he said.

The data make a strong case of the need for countries to enact fiscal policy, he said. “I think they’ll panic. They’re going to send a wall of money our way,” Mr. Vistesen said.

Copper prices also took a hit after the German data, falling 0.4%. Germany consumed 1.24 million tons of refined copper in 2018, according to Wood Mackenzie, or around 5% of global demand. That makes it the third-largest consumer of refined copper in the world, behind the U.S. and China.

Shares in airplane and travel companies rose following the collapse of British travel group Thomas Cook Group PLC after the company failed to conclude a rescue deal with investors and creditors, canceling all bookings and forcing U.K. authorities to help get thousands of vacationers home. Shares in travel company TUIAG rose 7.4% and shares in EasyJet PLC gained 3.4%.

In the U.S., futures for the S&P 500 were unchanged. The contracts don’t necessarily predict moves after the opening bell. 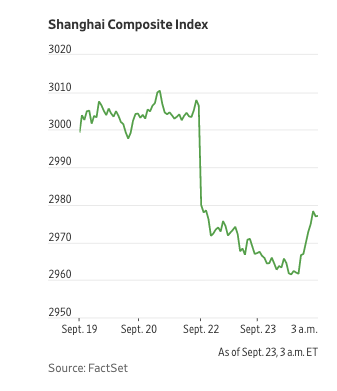 “The farm visit news was certainly a factor but having said that, investors’ expectations for a quick resolution had been pretty low in the first place,” said Zhang Gang, senior analyst at Central China Securities , saying the declines were relatively limited by Chinese standards.

Twists and turns on the trade front aside, the Chinese central bank’s decision to hold a key medium-term interest rate steady last week has continued to weigh on sentiment, Mr. Zhang said. “There are few signs that the authorities will significantly loosen monetary policy in the near term,” he added.

Brent crude oil slipped 0.4% to $62.97 a barrel, after Iran freed a British tanker, ending a monthslong standoff ahead of a United Nations summit where it faces tough questions over attacks on Saudi Arabian oil facilities.

The Wall Street Journal reported Sunday that the Saudi Arabian Oil Co. was offering equipment makers and service providers a premium for parts and repair work as it seeks to restore operations hampered by an attack on oil facilities earlier this month.

It may take many months—rather than the maximum 10 weeks company executives have promised—to restore operations to full working order, Saudi officials and oil contractors said.

Hong Kong’s Hang Seng fell 0.8% after another weekend of protests. Japan’s Nikkei 225 was closed for a holiday, and Korea’s Kospi was flat.

Indian shares were a bright spot, hitting a two-month high as the government’s measures to prop up sluggish economic growth boost investor sentiment.

The yield on the 10-Year Treasury fell to 1.694% from 1.754% on Friday afternoon. Bond prices and yields move in opposite directions. 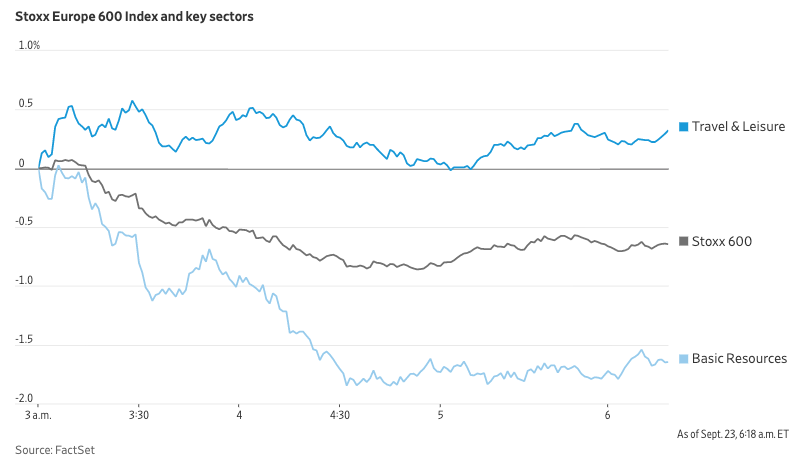