As Germany’s economy shrinks, the government is about to loosen the purse strings—a little bit, and very discreetly.

Economists and international organizations have urged Berlin for months to let go of its fiscal orthodoxy and spend more to fight a looming recession. Global economic growth is slowing and the world’s central banks are lacking much ammunition to stimulate demand, while Germany’s overflowing coffers are a pile of unused ordnance, the argument goes.

But while German officials say the government is preparing measures to support demand, they are likely to fall well short of the big stimulus the world is hoping for.

There is no doubt Germany could use a boost. Its gross domestic product dropped 0.1% in the second quarter and is likely to have fallen again in the past three months, putting the country in a recession. In the second quarter alone, the manufacturing sector shrunk almost 5% and exports took their steepest drop in six years. 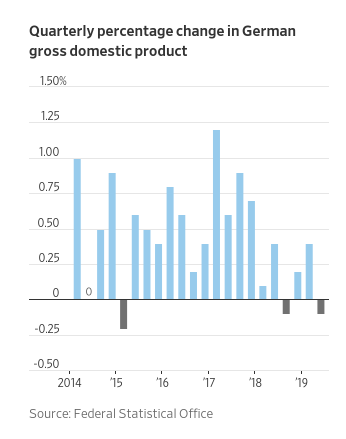 Confidence surveys point to more gloom ahead. And with the U.S.-Chinese trade war unresolved and the U.K. now increasingly likely to leave the European Union without an agreement next month, things could turn uglier.

“If there ever was a time for the government to spend more, this would be now,” said Dirk Schumacher, head of European economics atNatixis. “This would benefit not just Germany but the eurozone as a whole. Everybody is asking for it.”

Faced with this, the finance ministry has been working on proposals worth about €50 billion ($55 billion) and almost entirely financed by debt, according to two senior officials.

The bulk of the stimulus would come from not raising taxes to finance the higher welfare spending and falling corporate tax revenues that will occur automatically as profits fall and workers lose their jobs, which would allow the budget deficit to grow.

Incentives to buy electric cars or insulate homes and special rules allowing companies to write down investment faster are also in the cards, as are special-purpose investment vehicles, which thanks to an accounting quirk aren’t subject to the country’s strict fiscal rules.

Such a package would be projected to boost GDP initially by about 1.5% but faces questions about its potential effectiveness.

There is no consensus on what would be an appropriate amount to spend. Some economists have called for hundreds of billions. Others much less. The issue isn’t so much the amount of spending—but the following caveats.

Jens Südekum, a professor at Heinrich-Heine-University in Düsseldorf, reckons Germany could raise its deficit to about €35 billion a year without breaking any rules. This would mean spreading the government’s planned largess over two years: Not exactly a big-bang stimulus.

“The government seems to have decided it will not slam on the brakes in case of a recession,” said Mr. Südekum. “The question is whether that is too little, too late.”

The second concern is timing. Many economists want Germany to act now. But because of how the stimulus is designed, it wouldn’t kick in until well into a recession, when much of the damage has already happened.

One reason the government is taking its time is politicians’ reluctance to appear too alarmed. As one senior official puts it, “we have more than enough money and instruments to apply in case of a recession, but we will not talk ourselves into one.”

Chancellor Angela Merkel played down the likelihood of a pre-emptive strike two weeks ago, saying “I don’t see the need for fiscal stimulus.” 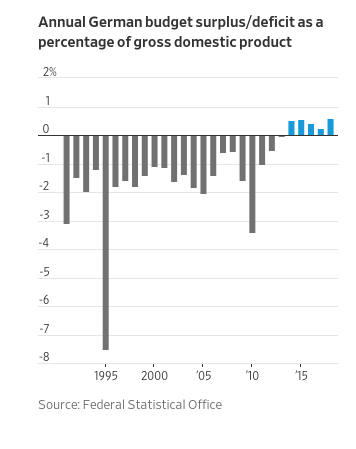 David Marsh, chairman of OMFIF, a London-based economic think tank, sees “a new openness by the government [regarding deficit spending] and that’s progress…But it certainly won’t take the pressure off the European Central Bank” to continue supporting the eurozone’s economy.

Lastly, even as the government slowly warms to the notion of supporting demand, other potential policies point in the opposite direction, at best muddying the message, at worst threatening to neutralize the fiscal boost.

The Social Democrats, the junior member in Ms. Merkel’s coalition, unveiled plans this week for a €10-billion-a-year wealth tax. Several party leaders have also called for an increase in the top rate of income tax, even though Germany has the highest taxes on labor after Belgium according to data from the Organization for Economic Cooperation and Development.

Another example: A package of environmental measures that the government will unveil this month could include some growth-boosting policies. But it could also feature a carbon tax, which would have a chilling effect.

With opinion polls showing that fiscal prudence remains highly popular, there are still misgivings among many politicians about breaking with five years of budget surpluses; especially as Berlin braces for early elections should Ms. Merkel’s fragile government fall.

Michael Hüther, director of the German Economic Institute, a business-affiliated think tank, says the fixation on balanced budgets “is preventing a sober analysis of the situation…I’m not saying we need a huge spending plan tomorrow, but we need confidence that something will be done.”