Germany’s Labor System Would Be Difficult to Import to U.S.


PARTAGER Germany’s Labor System Would Be Difficult to Import to U.S.

Democratic presidential candidates push for elements of Sozialpartnerschaft, but labor experts say it is uniquely German

MUNICH, Germany—Some Democratic presidential candidates want to bring elements of German labor relations to the U.S. While that could appear attractive on the surface, doing so would be difficult and the economic payoff uncertain. Labor unions are much more prevalent in Germany than in the U.S. under a system called Sozialpartnerschaft, or social partnership. It has fans among both corporate leaders and unions here. The system is credited with giving German workers job security and a greater voice in how companies are run. But labor experts view it as a uniquely German system developed when manufacturing giants dominated the economy.

“A model like Sozialpartnerschaft that has grown over decades is based on many economic, cultural and social aspects,” said Solveigh Hieronimus, a McKinsey & Co. partner in Munich who advises on labor-market strategies. “It is probably not easily transferable to other countries.” 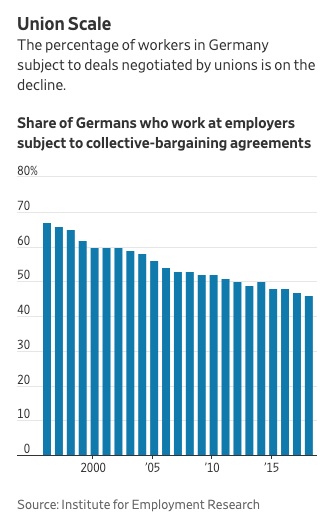 The German system has two main features that separate it from the U.S. One is works councils—employee representatives who have a say in company management. In large German firms, these workers hold half the seats on corporate boards, to which the chief executive reports. Sen. Elizabeth Warren (D., Mass.), a Democratic presidential candidate, has proposed legislation that would require large U.S. companies to have labor representatives on corporate boards, saying that would hold firms more accountable to employees and communities where they operate. Such councils have been criticized by business groups for drawing out decision making around reorganizations or adoption of new technology at a time when German companies are facing competition from Asia and the U.S. “There’s a big contradiction between the needs of the union and the needs of the company,” said Bertram Brossardt, chief executive of the Bavarian Industry Association. The other key feature of the German system is sectorwide contracts. Sen. Bernie Sanders (I., Vt.), another candidate for the Democratic presidential nomination, has supported this with the aim of extending the better pay and benefits received by union members to more U.S. workers.

German business associations negotiate labor contracts with unions that apply to multiple employers in an industry, such as metal processing or grocery stores. The result is that even nonunionized businesses often follow the wage structure agreed to in the contract for their industry. In the U.S., such sectoral contracts would require a significant rewrite of labor law, a difficult prospect in a divided Congress. Under current law, U.S. businesses generally can’t work collectively. While unions represent workers at multiple employers, they must negotiate contracts with individual firms. Sectoral contracts discourage employee movement between firms because they are unlikely to receive a raise by taking a job at a competitor. The German labor system deserves some credit for a long period of postwar prosperity, said Thomas Griebe, a Hamburg-based employment attorney at Vangard Littler who represents management. He said that is in part because a close relationship between management and workers has allowed easier concessions during economic slowdowns. But if the works-council system didn’t exist today, he doubts Germans would be clamoring to create it. “The current system is not in line with the modern world of working,” he said. “The system creates more costs for the firms, and the benefits of the system are hard to calculate.” 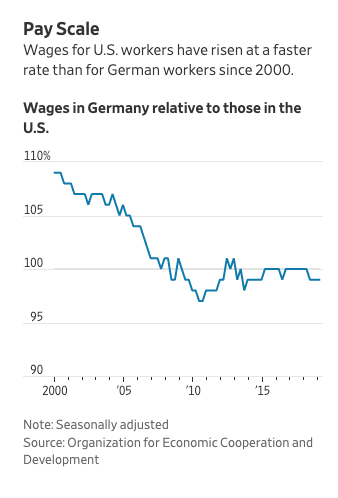 German wages have grown more slowly than U.S. wages since 2000, even though Germany has higher unionization rates. In 2000, German workers earned 109% the average wage of U.S. workers, when adjusting for currency differences. Now they earn 99% of the wage paid to U.S. workers, according to data from the Organization for Economic Cooperation and Development. Comparing total compensation is difficult because German workers receive health care and more generous retirement benefits from the government. While the German system has won praise from some U.S. politicians, unionization rates in Germany have fallen as its economy faces pressures from lower-cost foreign labor and a move toward less-unionized fields, such as information technology. German labor leaders, however, say they their system has clear benefits. “Workers in the U.S. are definitely at risk,” said Frank Bsirske, the recently retired chairman of Germany’s United Services Union. “The level of security, the level of sustainability, the level of working conditions are significantly higher in Germany.” U.S. labor-market fluctuations have downsides for some workers. But the American system has aided in the creation of some of the world’s leading technology firms and supported a decadelong stretch of economic growth, while Europe’s economy has grown in fits and starts. Another challenge to bringing a German-style system to the U.S.: There is a small base of unionized workers to build it on. In the U.S., 12% of U.S. workers were represented by labor unions in 2018, according to the Labor Department. In contrast, 46% of Germans work for employers subject to collective-bargaining agreements negotiated by unions, according to the Institute for Employment Research in Nuremberg. U.S. workers appear to have chosen not to follow in Germany’s footsteps, said Mr. Brossardt of the industry association. “To change traditions, I don’t know if it’s possible if the employees don’t want to take part in a union,” he said.