The coronavirus outbreak in the U.S. comes as food-delivery companies are in an intense battle for customers and restaurant partnerships. PHOTO: DENIS BALIBOUSE/REUTERS

For food-delivery companies, the new coronavirus poses a complex puzzle: It could boost customer demand but batter the restaurants that supply the food and threaten the health of workers who deliver it.

Initial signs from areas like Seattle that were hard-hit early on by the U.S. outbreak show robust orders for food delivery, as employees are urged to work from home and schools close. But customers also are cutting back on actual visits that are important to restaurants’ profitability. 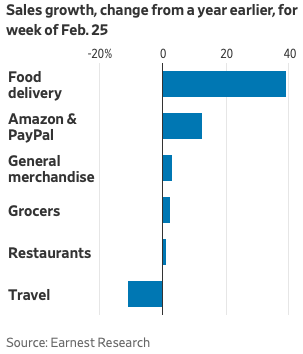 Grubhub Inc. GRUB 6.68% said Friday it would defer the collection of marketing commissions charged to independent restaurants it delivers for, amounting to roughly 10% to 15% an order. The Chicago-based company said it would defer those costs for now up to $100 million, and the policy would last for an indefinite period beginning Monday.

That followed Postmates Inc. saying this past Tuesday it would temporarily waive all commissions for San Francisco-based businesses that want to join its platform to take advantage of consumers avoiding in-restaurant dining.

Restaurants who have struck deals with the delivery companies are highlighting that alternative for customers. Chipotle Mexican Grill Inc. said Thursday it was waiving delivery fees for the month and shipping to-go orders in tamper-proof bags. The same day,Starbucks Corp. sent a notice to U.S. customers about potential disruptions to its stores and highlighting delivery through Uber Technologies Inc.’s UBER -0.04% Eats division as a workaround.

The U.S. outbreak comes as food-delivery companies are in an intense battle for customers and restaurant partnerships. Companies shuttling food to customers’ homes could benefit from coronavirus if they shore up diner loyalty and restaurants remain open and willing to deliver during the outbreak, according to Wall Street analysts.

Food-delivery orders increased in China in January when the pandemic first hit, according to industry research-firm NPD Group Inc. But delivery companies experienced a drop of business a month into the pandemic there as restaurants shut, consumers worried about food contamination and the quarantining of drivers challenged operations, according to a Credit Suisse report. Orders were down 30% in February from typical averages, then started to recover as cities resumed business, restaurants reopened and service options such as contactless delivery took hold, the Wall Street firm found.

The U.S. companies are taking steps to reassure customers that their services are safe. Several are permitting front-door drop-offs to limit contact between drivers and consumers.

In Seattle, restaurant sales declined 10% in the week through March 1 compared with a previous four-week average, according to industry firm Black Box Intelligence. To-go sales at restaurants grew by more than 10% during the same time period.

“I go out less than I normally would,” said Oscar Avatare, a 23-year-old student at the University of Washington in Seattle. “For certain meals that I would get with friends before, I now just get on Uber Eats,” he said. His university has suspended classes for two weeks.

Nationwide spending on food delivery in the U.S. shows modest week-over-week growth through Feb. 24, according to market-research firm Edison Trends. Spending also grew year-over-year, though at a slower pace compared with last year because DoorDash Inc., Eats and Postmates rapidly grew on the back of aggressive sales and marketing in the first half of 2019, according to Earnest Research. Most restaurant chains didn’t approach that level of growth, and some experienced falling sales, the firm found. Meanwhile, other discretionary spending fell sharply over the same period.

It remains to be seen if customers shun food delivery out of fear of any exposure to germs from the courier or meal.

“You can’t control the supply chain with food delivery,” said Jonathan Padilla, a 31-year-old Stanford University researcher focused on blockchain, who is avoiding getting food sent to him for now.

Food-delivery companies are fighting to build customer loyalty as the sector matures. Companies that pushed for growth at all costs are now working to strengthen their finances. DoorDash confidentially filed for an initial public offering last month. Postmates is also considering a listing.

Food-delivery companies separately risk alienating their gig-economy drivers at a time that they need them the most. Companies are instructing drivers to avoid working if they feel sick, but face a conundrum: Without them, they can’t deliver orders. Many drivers are demanding paid time off, so they can stay at home if they feel sick without having to worry about paying the bills.

“We are exposed to this virus way more than anyone, yet we are denied any benefits,” said Mostafa Maklad, a 36-year-old who delivers for services in San Francisco. “Should I stay at home and let the bills accumulate, or should I just risk it and work to survive?”

Uber and DoorDash have said they would compensate drivers infected or quarantined by a public-health agency with up to 14 days of missed pay. Uber, DoorDash, Grubhub and Postmates are separately weighing banding together to set up a compensation fund for drivers. DoorDash said it is handing out gloves and hand sanitizers to its drivers. Postmates said it would also support medical checkups for its drivers.