Farm debt is projected to hit a record $416 billion this year, according to the U.S. Department of Agriculture.

Alternative lenders extend reach during steep agricultural downturn; ‘They keep their finger on you.’

Financial stress is mounting in the Farm Belt, pushing more growers to take on high-interest loans outside traditional banks to stay in business.

After his local farm bank wouldn’t lend him as much as he said he needed in 2017, Iowa farmer James Kron turned to Ag Resource Management LLC, a Texas-based financial-services firm. Now, when he takes his corn and soybeans to grain elevators near his farm, he signs the checks over to ARM until his loan is paid back in full.

He is one of many farmers leaning on alternative lenders to make it through the steepest agricultural downturn in a generation. With crop prices stuck at low levels, traditional farm banks are placing stricter terms on farm loans and doling out less money, leaving cash-strapped farmers such as Mr. Kron to seek capital from more lightly regulated entities.

While firms including ARM, FarmOp Capital LLC and Fora Financial LLC can be a lifeline for farmers, their loans can carry interest rates double those of traditional farm banks, said farmers, agricultural economists and lenders. The funding can require closer monitoring of how farmers spend as well as liens on each bushel of grain they produce.

“They keep their finger on you,” said Mr. Kron, who has borrowed from ARM over the past three years at interest rates of about 8%. Comparable rates at more-traditional banks are between 2% and 5%. 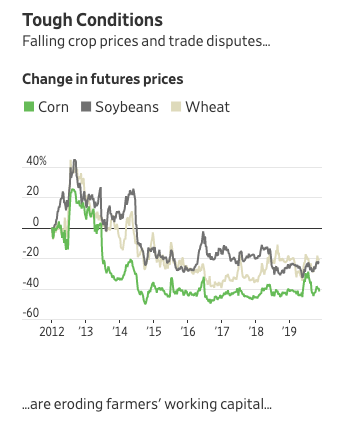 Farm debt is projected to hit a record $416 billion this year, according to the U.S. Department of Agriculture, up nearly 40% since 2012. Defaults and bankruptcies are rising as well, crimping the ability of cash-strapped farmers to secure funding for seed, fertilizer and fuel.

The total value of loans from the largest banks working in agriculture has climbed about 4% over the past five years, but some big banks have cut back, particularly on loans to smaller, less-capitalized farmers, lending officials said. That reflects their assessment that those farmers face greater risks from low crop prices and a year of bad weather, they said. 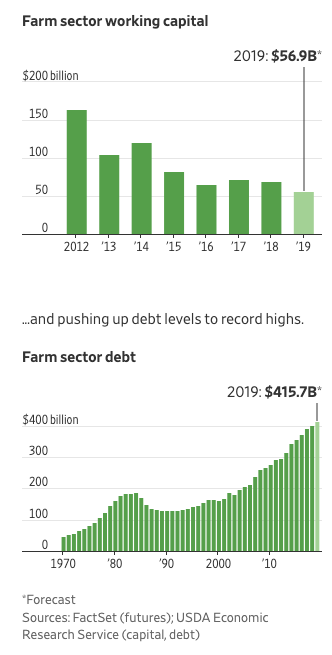 “A lot of balance sheets deteriorated to below what a lender would accept,” said Curt Hudnutt, head of North America rural banking at Rabobank, one of the world’s largest farm banks.

Wells Fargo & Co., U.S. Bancorp and Bank of America Corp. have cut their non-real estate agricultural loan portfolios by 8%, 36% and 57%, respectively, in the past five years, according to data from the Federal Deposit Insurance Corp.

Farmers of crops such as corn and soybeans are having a tougher time meeting the financial requirements for a loan, said Michael Swanson, chief agricultural economist at Wells Fargo. He said the bank is lending more to farmers of increasingly popular crops such as almonds and pistachios. U.S. Bancorp and Bank of America declined to comment.

For collateral, alternative farm lenders rely on crop-insurance policies, government payments and crop-sale proceeds rather than real estate, equipment and other assets. Lenders said that allows them to lend to farmers who don’t own much land or are working their way out of bankruptcy.

“We can keep the grower farming,” said Billy Moore, president of insurance and field operations at ARM. The 10-year-old firm, backed by private equity, lends to 1,600 farmers in 19 states. Mr. Moore said the firm’s loan volume has grown at a 40% rate over the past three years.

David Kohl, professor emeritus of agricultural economics at Virginia Tech, estimated such firms supply about 2% of financing to U.S. farms. They can provide a financial bridge to struggling farmers, but their looser regulation allows the firms more control over rates and terms, he said.

“It’s shadow financing for ag,” Prof. Kohl said. “It’s hot money trying to find a place to get a good return without a lot of oversight.”

Heath Jobe, a 32-year-old Arkansas construction worker and farmer, said he quickly secured a loan from ARM after showing that his crop was insured and that he had enough equipment. A week later, he had $118,000 to buy seed, chemicals and fuel.

Dry weather hurt Mr. Jobe’s rice, bean and corn crop in a recent year. When he tried to make a claim, his insurance company said he hadn’t properly documented his crop losses. Loan payments carrying an interest rate of about 9% piled up. Mr. Jobe said ARM turned down his request for a new loan. A few months later, he filed for bankruptcy.

“If you don’t make a crop and you have a bad year, they’ll clean your clock,” Mr. Jobe said.

Mr. Moore of ARM declined to comment on the specifics of Mr. Jobe’s case. He said such outcomes are rare.

Some bankruptcy attorneys said costlier terms from nonbank lenders can make it hard for farmers to shore up their finances. Joe Peiffer, an attorney in Iowa, said a client secured a $500,000 loan from Fora Financial, a New York-based small-business lender. The loan carried an interest rate above 30%, Mr. Peiffer said, and required daily payments through automatic withdrawals from the farm’s account.

“The money was extremely expensive,” Mr. Peiffer said. He said the farmer, who declined to be interviewed, has liquidated his operation. Fora didn’t respond to requests for comment.

Other farmers said alternative lenders gave them a lifeline when no one else would. John Bulman, who raises cabbage and grain near Elizabeth City, N.C., said he filed for bankruptcy in 2018 after a bank refused to extend his credit following a string of poor harvests.

Alternative lenders said new technology allows them to keep closer tabs on crops to make sure farmers are on track to meet their payment terms.

St. Paul, Minn.-based FarmOp Capital tracks crop growth with satellites and data funneled from farm machinery. If a field is facing pests or disease, the company checks in with the farmer, said FarmOp Chief Executive Bill York. While FarmOp can provide quick capital at rates generally between 6.5% and 8.5%, evaluate operations and help farmers monitor crops, those steps are only effective up to a point, he said.

“If they don’t have the ability to efficiently produce a crop, and their viability going forward, we’re not going to be a magic bullet,” he said.