Philip Morris and Altria hold the same portfolio of cigarette brands, including Marlboros, which are sold by Altria in the U.S. and Philip Morris elsewhere.

The two businesses—which were split apart in 2008—hold the same portfolio of cigarettes, including industry leader Marlboro, one of the world’s best known brands. The products are sold by Altria in the U.S. and Philip Morris elsewhere. A combination would create a company with a market value of roughly $200 billion.

Both companies have been struggling with declining cigarette consumption and new electronic cigarettes such as those made by Juul Labs Inc., which are stealing away some smokers. Altria invested $12.8 billion to take a large stake in Juul last year. 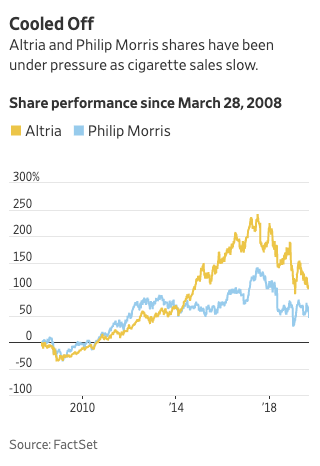 The talks were partly sparked by U.S. authorization this year of a cigarette alternative that Altria and Philip Morris will jointly start selling in September, according to people familiar with the matter, and the realization that it could be easier to sell as one company rather than through an existing distribution deal.

The discussions are also motivated by the risks—and opportunities—that Juul presents for both companies as the startup expands outside the U.S., the people said.

Philip Morris is the bigger of the two companies both in terms of revenue and market value. Based on share prices before the companies disclosed their talks early Tuesday, Philip Morris had a market capitalization of about $121 billion and Altria sported a market value of roughly $88 billion.

The two sides are discussing an all-stock deal with no premium based on where the two companies’ shares have been trading recently, people familiar with the matter said. Philip Morris would control about 59% of the combined company under the terms currently being discussed, some of the people said.

The companies are describing it as a merger of equals because other elements such as the name, board and management team are expected to be more balanced, including a roughly evenly split board, some of the people said. Altria Chief Executive Howard Willard is unlikely to lead the combined company given that he has limited experience running international businesses, those people said.

The two sides could reach a deal within weeks, the people said.

Philip Morris said the companies were discussing an all-stock merger but could give no assurance that the talks would lead to any agreement. Altria issued a similar statement.

The potential combination would bring the industry full circle from the 2000s, when global players distanced themselves from the U.S. market amid legal concerns. British American Tobacco PLC pulled out in 2004, and Altria spun off its overseas business in 2008 as Philip Morris International. But the litigation risks for cigarette makers in the U.S. have receded since then.

Two years ago, BAT took over full control of Reynolds American Inc., the second-largest competitor in the U.S. and maker of brands such as Camel and Newport.

While Philip Morris and Altria’s businesses have traditionally been divided between the U.S. and the rest of the world, those lines have been blurring in recent years as each company searches for growth beyond Marlboros. Philip Morris had nearly $30 billion in annual sales last year, while Altria brought in nearly $20 billion. 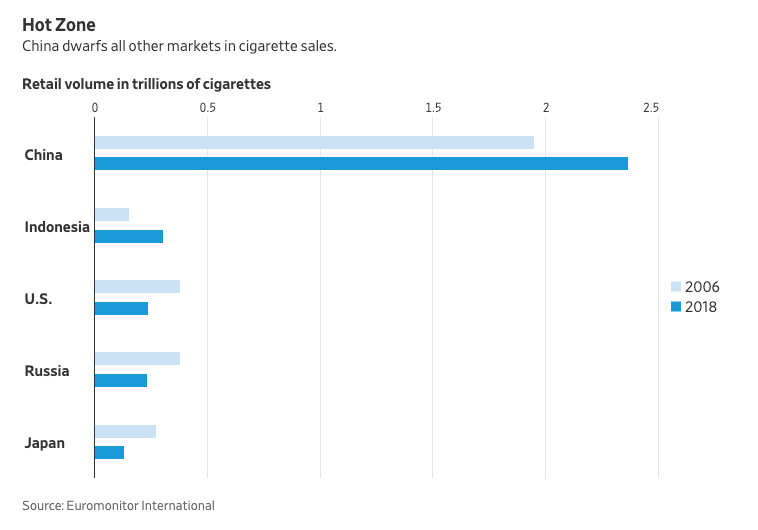 Both companies have warned that cigarette shipments were declining faster than expected, both in the U.S. and other big markets such as Japan and Russia. Last month, Altria said more people were using e-cigarettes exclusively than it had expected. Philip Morris, meanwhile, earlier this year lowered its earnings forecast for 2019.

Juul, with Altria’s backing, has been launched in over a dozen international markets where it threatens to hurt Philip Morris’s cigarette sales.

Philip Morris and Altria have also forged a partnership on their own cigarette alternative, a device called IQOS that heats but doesn’t burn tobacco. Philip Morris sells it in Japan, the U.K. and other markets, while Altria is set to launch the device in the U.S. in September. 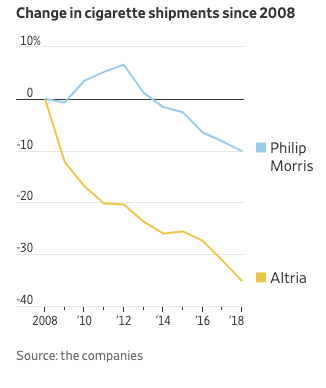 Philip Morris has spent $6 billion since 2008 developing IQOS and other next-generation products. Philip Morris Chief Executive André Calantzopoulos has said the company is shifting its focus to “a smoke-free future” and could someday stop selling traditional cigarettes.

Altria’s Mr. Willard has gambled that investing in Juul, a startup whose sleek, nicotine-packed vaporizers are popular with teens, will help the company keep up with a changing market even if it cannibalizes sales of Marlboros. “Ten years from now the majority of the tobacco products that are sold could very well be noncombustible products,” he said in an interview earlier this year.

That would mark a major consumer shift. U.S. sales of cigarettes, cigars and smoking tobacco were nearly $107 billion last year, compared with about $15 billion in sales of smokeless tobacco and vaping products, according to Euromonitor International estimates, which include web sales. Vaping products such as Juul made up $5.6 billion of those sales.

Although fewer people are smoking and cigarette shipments are falling, U.S. tobacco profits have grown steadily as Altria and Reynolds regularly push up prices. The U.S. generates the most tobacco profits of any market outside of China, where tobacco is controlled by the state.

In the U.S., the companies must navigate an overhaul of U.S. regulatory policy in which the Food and Drug Administration is pushing to reduce nicotine in cigarettes to nonaddictive levels and recently proposed putting graphic warning labels on cigarette packs. At the same time, the agency is trying to combat a surge in teen vaping.

U.S. regulators and lawmakers have threatened to ban Juul devices entirely if underage use continues to increase. The San Francisco company recently opened Juul-branded retail stores in Seoul and Toronto and is considering a sales launch of its vaporizers in China as early as September.

Bonnie Herzog, a tobacco analyst at Wells Fargo, said Altria is attractive to Philip Morris because of its 35% stake in Juul and the possibility of capturing all profits from IQOS sales in the U.S. Likewise, she said, Philip Morris could help with Juul’s overseas expansion.