Everyone Hates Customer Service. This Is Why.


PARTAGER Everyone Hates Customer Service. This Is Why.

Technology lets companies see how badly they can treat consumers, right up until the moment they bolt

In corporate parlance, it’s called the “breakpoint.” It’s how far customers can be pushed before their heads explode.

From long waits at the airport to rude store clerks to ineffective helplines, shoddy customer service is a universal frustration. Today, companies crunch data and use artificial intelligence to determine exactly how angry a customer has to be to bolt. Many are walking right up to that line.

Technologies can track how long a customer will wait for a human to answer the phone and how many ads they will tolerate. They can monitor the tone of a customer’s voice. Companies know what steps they must take to keep shoppers loyal—and which they can skip.

This knowledge has contributed to a decline in how customers are treated, say analysts, consultants and former executives. A smaller number make the counter case: that companies are using their better read to improve the customer experience.

“There is more data available on just how disgruntled someone can be,” said Megan Burns, CEO of consulting company Experience Enterprises.

Sally Robey reached her breakpoint with AT&TInc. after six calls and a collective four hours on the phone with customer-service agents over the price of an unlimited phone plan. “It’s like they have a stranglehold on us,” said Ms. Robey, who had been an AT&T customer for 30 years when she decided she was done.

Dogged by overage fees on her family’s seven-phone wireless plan, Ms. Robey, a mother of four from Wilmette, Ill., set out to get a plan with unlimited data. An AT&T cable subscriber and customer since 1988, she eventually got a better deal from Verizon CommunicationsInc. and returned to AT&T to see if it would match the rates. AT&T declined.

“I said, ‘This is ridiculous, you’re not doing anything to keep us,’” Ms. Robey said. The agent, she said, told her: “No, there’s nothing I can do.”

It was only when Ms. Robey was in the act of switching phone numbers to Verizon from AT&T that the wireless carrier buckled, she said.

“Then they were, like, ‘Oh, we want to keep you.’ ” She ended
up staying because the company gave her what she wanted right before she was about to leave.

An AT&T spokeswoman declined to comment on Ms. Robey’s situation but said the company contacted her on the matter.

The telecom giant is among the companies employing artificial intelligence to gauge customers’ behavior patterns and personalities to pair them with customer-service agents.

“Matching the right agent to customers improves the likelihood of a positive outcome, measured by resolution rate and satisfaction scores,” an AT&T spokeswoman said. The company declined to comment further.

Some companies now equip call centers with software that analyzes a caller’s tone of voice and pace of speech to determine how upset the person is. Angrier callers get routed to agents skilled at de-escalating conflict, who are in turn warned in advance.

San Francisco-based cloud communications provider Dialpad Inc. transcribes call-center conversations in real time, sensing when a call is taking a turn for the worse. That can help prompt a manager to listen in, view the transcript and step in if necessary without having to ask customers to repeat themselves.

Computing power and processing power have expanded exponentially, said John Birrer, chief of staff of Afiniti Inc., a company that makes call-center software. “That allows you to make a millisecond decision when a call comes in to decide in a sophisticated way how to handle the call,” he said.

Afiniti crunches data gleaned from consumers’ demographic profiles, credit scores and past interactions with a company to determine which customer-service agent is the best fit. An algorithm then matches the caller to the agent who has had the most success with that type of caller.

The emergence of companies that sell their products directly to shoppers means more firms have data on exactly when, how and why consumers buy—or don’t buy—their products. Since they don’t use a middleman they can know, for instance, that two delayed shipments won’t cost the company business, but three will.

Online sellers don’t have to worry as much about driving customers away with ads that pop up during the checkout process because they know it takes a certain number until people actually cancel their purchase, according to an industry consultant who worked at a company that used such a system. Retailers track consumers’ clicks as they go through the ordering process, allowing them to discern how many ads can appear before shoppers bail.

Just as data can be used to measure customers’ threshold for bad service, it also helps pinpoint which shoppers are most profitable and, therefore, worth the effort and expense to please.

“Companies have gotten good at figuring out what does and doesn’t move the needle and what things will increase sales and what will not increase sales,” said John Mitchell, president and managing principal of Applied Marketing Science, a customer-service consulting firm.

“Breakpoint” is an informal term used by some companies and consultants to describe the point at which consumers quit, whether it’s canceling a subscription service, no longer buying a product or switching to a rival company.

Mr. Dixon said there is a disconnect between what companies think customers want and what they actually want. For instance, it’s most common for customer-service agents to have empathetic personalities, a sought-after trait in the field.

But in an analysis of how well customer-service agents perform, a personality type known as a “controller,” someone who is “outspoken and opinionated,” did far better, Mr. Dixon said. Yet only 2% of managers interviewed in the study said they would consider hiring such a person.

“People want to deal with someone who is smarter than they are and who will fix their problem,” he said.

Executives might not even have to solve the problem to put the customer at ease. A Harvard study of Twitter interactions from March 2015 to April 2016 found replying speedily to a complaining customer and making the response personal is an effective way to retain business, even if the company doesn’t resolve the issue.

The study examined more than 400,000 customer-service tweets involving airlines and wireless carriers in the U.S. Researchers contacted the posters and found consumers who engaged companies on Twitter were more likely to prefer the brand or pay more for it, even if their tweet was negative or neutral.

Dan Russo, a once-disgruntled Wells Fargo & Co. customer, has come to appreciate an efficient approach to customer service. He says that three years ago, he was unemployed when he incurred hundreds of dollars in overdraft fees, triggered because a direct-withdrawal for a gym membership, which he believed he had canceled, left his bank account short. That caused a handful of other small charges to bounce.

Furious because the purchases that bounced amounted to less than $20, he said he pleaded with a bank agent to remove the fees. He said he called at least seven times, going through different departments and supervisors.

Mr. Russo, a 36-year-old regional vice president for a construction company who lives in Costa Mesa, Calif., switched to an online bank—where, he said, “You call, the phone rings, and someone answers. No sub menu, no ‘hit option 9.’ ”—and has been pleased with his experience.

“I think these big banks know people will call in, get frustrated and hang up,” he said. “They know they can charge fees before someone leaves, and they know there’s a perception that it’s hard to change banks.”

A Wells Fargo spokesman declined to comment on Mr. Russo’s situation. The bank provides customers with a list of outside entities that make withdrawals to customers’ accounts to help them track recurring payments, he said. It also has added features to prevent overdraft fees, such as automatically sending an alert to online banking customers when their available balance drops to zero or below.

There is plenty to blame for the collective angst over poor customer service. Companies are bigger and employees more transient. Consumers have more avenues to shop and are therefore less loyal. The outsourcing wave of the 1990s and 2000s shifted legions of call centers to developing nations, where workers make little money, are disconnected from the companies they work for and often face language barriers.

Businesses have digitized basic customer-service functions, such as checking bank statements and making online returns. That means customers who connect with customer-service agents are generally those with the most complex problems. That leads to more difficult interactions.

“They just kept cutting and downsizing” during the financial crisis, said Richard Shapiro, founder and president of the Center for Client Retention in New Jersey. Customer-service departments and employees are generally the first and easiest cut companies make in difficult times. “If a general manager all of a sudden had a high profit we knew why: they cut their customer service department,” he said. “But a year later they would have problems.”

Unhappy customers are by far more likely to reply, he said. The company needed to build heartier machines for airports to withstand angry punches to the red frown. Touch screens had to be programmed to recognize repeat entries by the same person trying to amplify their negative opinion.

“It’s kind of cathartic, it provides them a channel to vent their dissatisfaction,” he said.

Historians point to another factor in the erosion of customer service: communications technology. Automated call distributors, which routed calls to customer-service agents, furthered the ability of companies to deal with customers remotely and en masse, depersonalizing the relationship.

Continental Airlines was one of the first big companies to make broad use of call distributors using a system developed in the early 1970s. 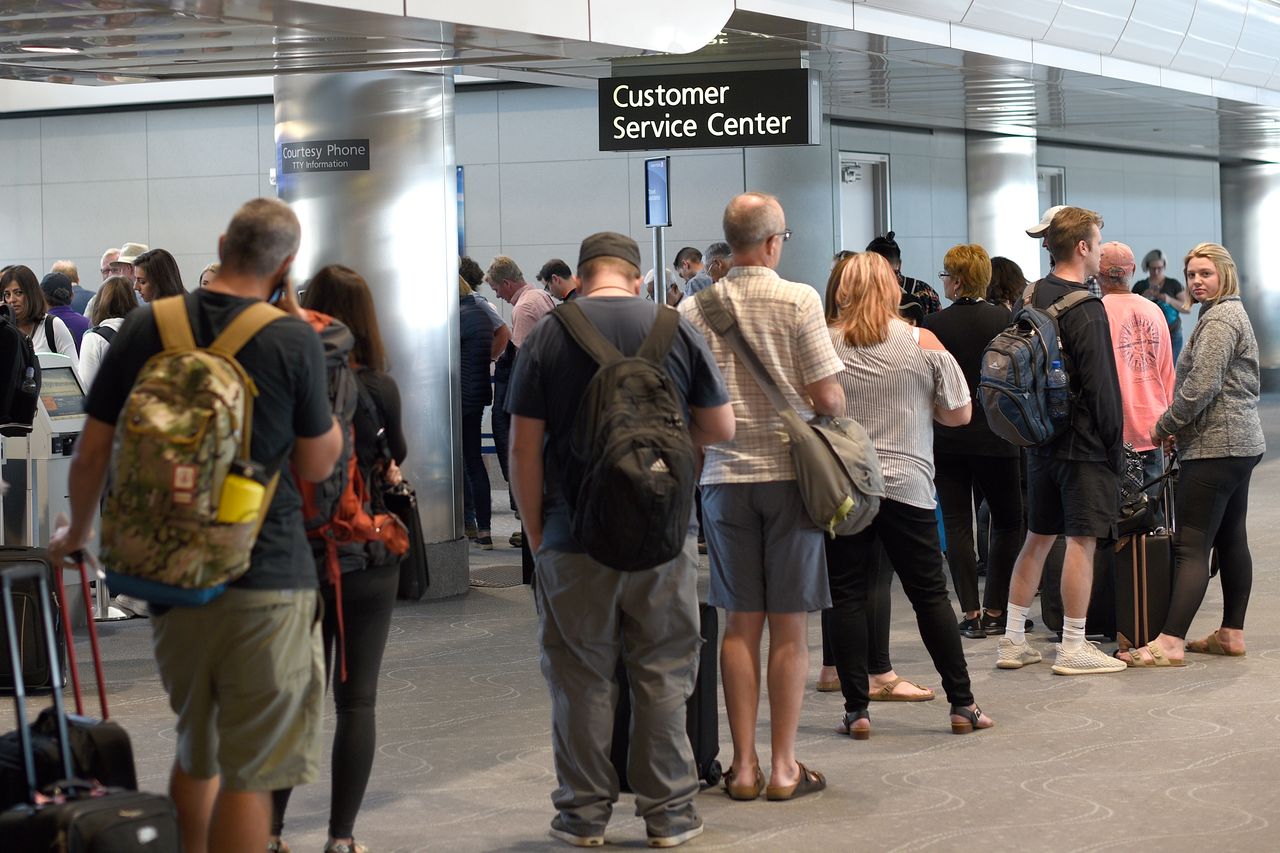 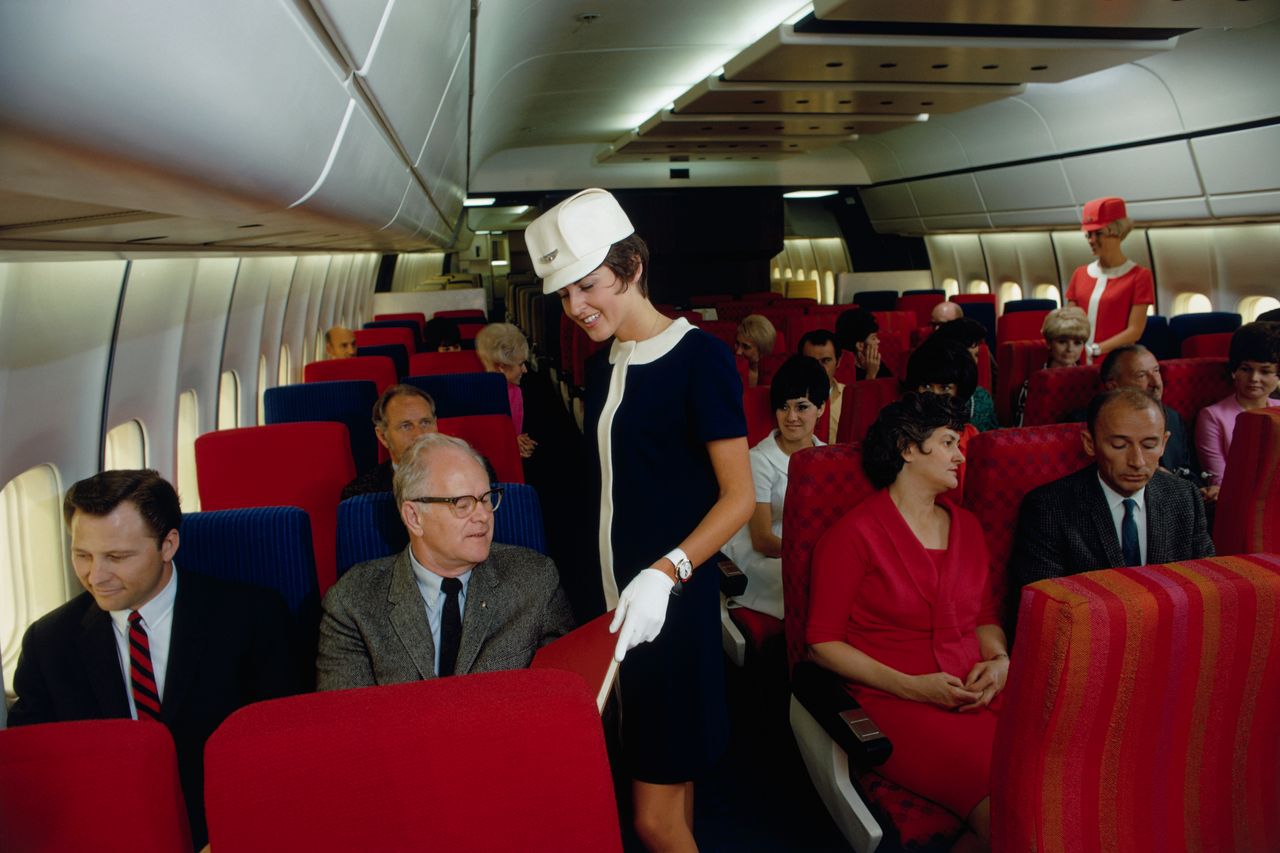 It is perhaps fitting that the industry which pioneered one of the most transformative technologies in customer service is also the one often linked to its declining standards.

Airlines in the 1950s and 1960s were known for doting flight attendants and perks such as fine dining and souvenirs for children. Delta Air Lines Inc. founder C.E. Woolman, who led the company in the 1930s and 1940s, would sometimes bring delayed passengers home for dinner and to sleep, said his daughter, Barbara Woolman Preston, according to the company’s website.

Deregulation of the airline industry in the late 1970s led to an explosion in competition. While the shift made commercial flying far more affordable, it also led to decades of cost cutting and increasingly limited service so loathed by current-day travelers.

The airline industry last year was near the bottom of the American Customer Satisfaction Index, which rates industries based on customer surveys. Last year, airlines averaged 39th out of ACSI’s 46 benchmarked industries. In 2018, internet-service providers and subscription-television services were the lowest. Brewing companies scored highest.

While customer frustration is more palpable today, whether people are truly treated worse by companies now is a matter of debate among researchers, analysts and companies.

Ewan Duncan, a McKinsey & Co. senior partner who consults on customer service, is among those who say the perception—not the actual experience—has grown worse in recent years. The social-media echo chamber and the fact that live customer-service agents are tackling more complex problems gives the impression things are worse than they are, he said.

“When you’re sitting on a plane and don’t have a gate, you’re grumpy and you tweet it out,” Mr. Duncan said. “If you have a good experience, you thank somebody and that’s it.”