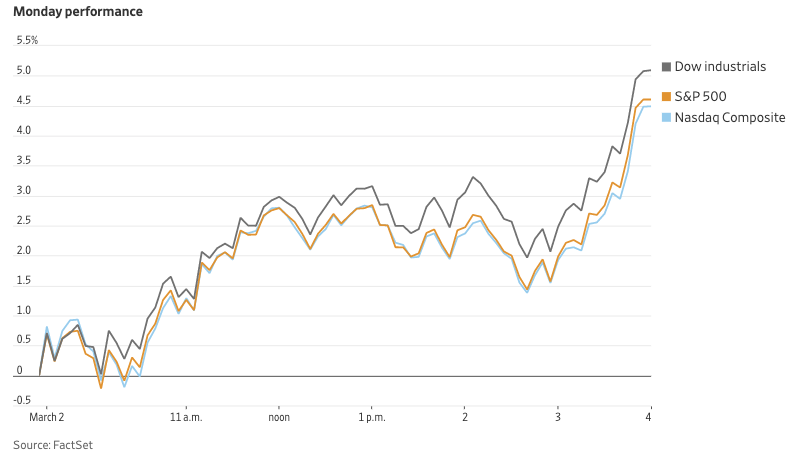 The Dow Jones Industrial Average rebounded from seven-session streak of declines with its best day in more than a decade, lifted by investors’ bets that central banks can stabilize markets and shield economic growth from the impact of the coronavirus epidemic.

Monday’s moves helped reverse some of the declines suffered last week—the worst for major U.S. indexes since the financial crisis. Gains were broad-based, with all 11 sectors of the S&P 500 rising more than 2%. Apple and Microsoft surged, adding a combined $193 billion in market value for the day, according to FactSet data. U.S. oil prices posted their largest one-session advance since mid-September.

Investors piled into wagers that the Federal Reserve and other major central banks may lower interest rates, possibly in tandem to boost the firepower of stimulus efforts. The yield on the benchmark 10-year U.S. Treasury note plumbed new record lows, settling at 1.085%. 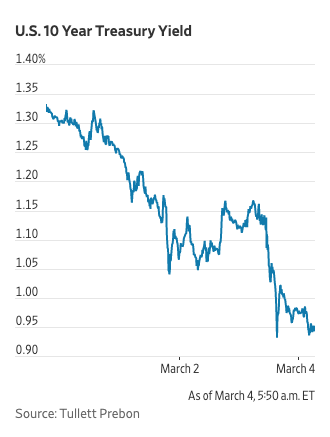 The gains came after U.S. stocks notched their worst week since the financial crisis, buffeted by worries the spreading coronavirus will slow growth. Between late Friday and Monday, the Dow industrials climbed 8.2% from Friday’s intraday low in furious and sometimes erratic trading, a frenzy some analysts said underscored how much information investors are trying to assess at the same time.

Since Sunday, there have been market-moving statements from key central banks, the World Health Organization, the Organization for Economic Cooperation and Development and the World Bank and International Monetary Fund.

The rapid reversals sparked by reactions to all those headlines show a market under the sway of “human emotions” as much as anything else, said Instinet executive director Frank Cappelleri.

“It changes by the hour,” Mr. Cappelleri said.

A volatile session began when stocks in Asia surged overnight after the Bank of Japan joined the Fed in pledging to take action in response to the coronavirus epidemic. That prompted Japan’s Nikkei 225 index to reverse early losses and close almost 1% higher. China’s Shanghai Composite surged 3.1%, even after official purchasing managers’ indexes in China, released over the weekend, plunged to record lows. These so-called PMI gauges cover factories and many other parts of the economy including services and construction. A private gauge released on Monday was similarly weak.

Echoing the BOJ and Fed, a senior official at the European Central Bank later said the ECB could take its interest rates further into negative territory and begin new bond purchases to support the eurozone economy. The Stoxx Europe 600 swung several times before ending the session up 0.1%.

Fears about the fallout from the virus haven’t dissipated. Monday’s gains were led by utilities, consumer staples and real-estate stocks, all sectors investors tend to buy when they are nervous. Costco Wholesale COST -2.07% climbed 10% to $309.14 and Walmart WMT -2.56% rose 7.6% to $115.88, with investors expecting both retailers to receive a boost from shoppers stocking up.

That is a sign some investors still doubt central banks can do much to alleviate the pressure on economic growth and financial markets, especially if the virus spreads into major centers of economic activity such as New York and London, some analysts said.

“If the central banks intervene, that is great and I appreciate that, but will this fix the problem?” asked Andrea Carzana, an equity fund manager for Columbia Threadneedle Investments. “If companies need to shut down because of the virus, it doesn’t really matter how much liquidity you put into the system,” he said, while adding that lower borrowing costs could help heavily indebted businesses that need to refinance.