Doubts Rise Over Europe’s Readiness for a No-Deal Brexit

EU dusts off contingency plans for a messy split after Boris Johnson says the U.K. will leave with or without a pact by Oct. 31

The European Union says it is ready for Britain to leave the bloc without a deal to smooth the split. Growing evidence says otherwise.

Until recently, few European officials believed a no-deal Brexit would happen, as their governments set in motion preparations. Now, Prime Minister Boris Johnson’s rising threats to take Britain out of the EU with or without a deal by the Oct. 31 deadline is prompting EU officials to dust off plans ranging from information campaigns to fast hirings of customs officers. 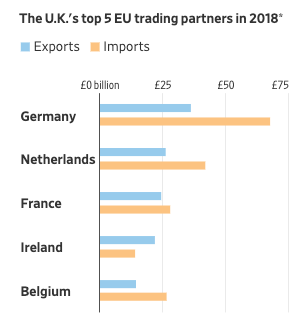 But smaller EU and British firms are still unprepared, warned the Confederation of British Industry in a recent report. “For hundreds of thousands of small companies, diverting precious resource—both human and financial—to Brexit preparedness measures is out of reach,” the report said.

As an EU member, the U.K. operates within the bloc’s customs union. In the event of a no-deal exit, tariffs for goods would default to World Trade Organization levels that are used among countries with no trade deals between them. 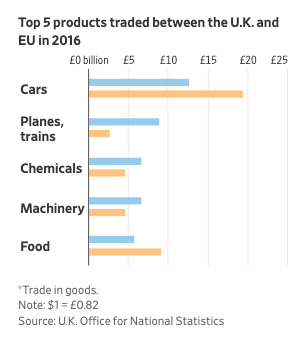 Since December 2017, the EU has been crafting contingency plans to address that possibility. In some cases it prolonged existing rights, such as by extending access to European airspace for British companies or by allowing British citizens to continue staying in the EU visa-free after Brexit. But a no-deal Brexit would also likely mean border checks and tariffs, British fishermen unable to cast nets in EU waters, and U.K. police being cut off from Europe’s security databases.

In France and the Netherlands, customs authorities have installed dedicated software for traders, built new parking lots and fast-tracked the hiring of hundreds of customs officials, to be ready for the traffic jams expected in the days after Brexit.

“If they’re not registered, trucks won’t be allowed in the terminal,” said John Keefe, spokesman for Getlink, the French company operating the Eurotunnel connecting Britain and France. Over one quarter of the total trade in goods between the U.K. and Europe passes through this tunnel via road and rail.

About 30% of all cargo crossing the tunnel under the English Channel is expected to face veterinary and customs checks or be pulled aside because shippers haven’t preregistered, said French customs chief Rodolphe Gintz. Drivers are getting leaflets in Polish, Romanian and Baltic languages to alert them of the obligation to preregister, he told a French senate hearing in April.

“Registration remains the weak link,” Mr. Keefe said. “Particularly on the U.K. side, there’s nothing done to encourage traders to register with the customs facilitation process.”

In the Netherlands, a similar system called PortBase used in the ports of Amsterdam and Rotterdam—Europe’s largest—has so far had about 70% of the traded volume with the U.K. preregistered, said a spokesman.

Delays due to missing paperwork can upend supply chains: The British Freight Transport Association estimates roughly 20 miles of additional queues for each extra minute a truck spends at customs in Dover.

European auto makers are particularly vulnerable to delays and tariffs on car parts that would come with a no-deal Brexit.

Carlos Tavares, chief executive of the PSA Group, which makes Peugeot Citroën and Opel brand cars, recently threatened to move Opel Astra production from the U.K. to Europe if a no-deal Brexit made production unprofitable.

German car maker BMW AG has even booked space on a giant Antonov cargo plane to avoid a potential logjam crossing the English Channel. The U.K. is one of BMW’s most important markets and the company produces Rolls-Royce and Mini vehicles there.

“I’d like to say three or four things to Boris Johnson,” BMW CEO Harald Krüger said last week. “He should listen to the economy and listen to the people, and…he should be in dialogue with industry about this issue.”

Countries closer to the U.K. are also bracing for a high toll from a no-deal Brexit. The Irish government in June said the country’s economic growth would be 3 percentage points lower in the first year after Brexit. France expects lower growth in case of a no-deal Brexit, with pharmaceuticals, electronics and apparel sectors most hit.

Denmark, which sends large quantities of pork and dairy products to the U.K., could lose over €2 billion in exports due to higher tariffs, its government estimates. Both Denmark and the Netherlands each expect tens of thousands of job losses from a no-deal Brexit.

Mr. Johnson’s negotiator, David Frost, visited Brussels last week to reiterate the prime minister’s position that the U.K. “would leave the EU on 31 October whatever the circumstances,” a U.K. government spokesman said.

But while the likelihood for a no-deal Brexit is increasing, many EU officials think another deadline extension remains possible. Earlier this year, the U.K. government asked the EU twice to push back the Brexit deadline—first, from March 29 to April 12 and then again, to Oct. 31.

“For now all we can do is keep calm and prepare for all scenarios,” said an EU official involved in Brexit discussions. “Instead of a hard Brexit, we may end up with another extension. But this will probably be the last one.”

—William Boston in Berlin contributed to this article.