A slowing economy portends trouble domestically, while his vision of globalization has failed to win support internationally

SHANGHAI—Three years ago, and three days before the inauguration of Donald Trump as U.S. president, Chinese President Xi Jinping won a warm ovation as a standard-bearer for globalization, welcoming his listeners at the World Economic Forum at Davos “aboard the express train of China’s development.”

Today, both the embrace of open trade and prediction of continuing rapid economic growth have run into a sobering reality: Besides clashing with the U.S. over trade and economic policy, China is chugging along at its slowest pace in decades, and international confidence in Mr. Xi’s version of globalization has weakened.

“His aura has been eclipsed a bit,” says Nayan Chanda, an associate professor of international relations at India’s Ashoka University. 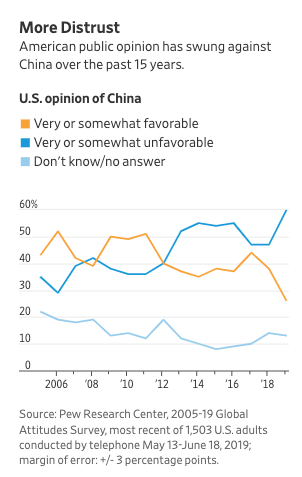 Mr. Xi has been in a hurry to elevate China’s place on the global stage since he took the helm of the Communist Party more than seven years ago. Yet many of his efforts to lift China’s economic, political and military influence have failed to win hearts and minds abroad, even among leaders who oppose Mr. Trump’s “America First” policies and support globalization.

Mr. Xi enjoys key strengths as a globalist. China appears to be leapfrogging the world in certain next-generation technology like 5G telecommunications, bolstering its engineering talent with state money. Its 400 million middle-income earners are a new global business opportunity, whether as tourists or customers, so Mr. Xi will likely remain welcome anywhere so long as China sustains growth.

The problem, says Mr. Chanda, is that “Xi’s globalization with Chinese characteristics is not the globalization involving free flow of people, goods and ideas.” The Chinese leader, Mr. Chanda suggests, favors those elements of globalization that strengthen his position—specifically China’s ability to sell everywhere—while he blocks those that don’t, like the free flow of information. 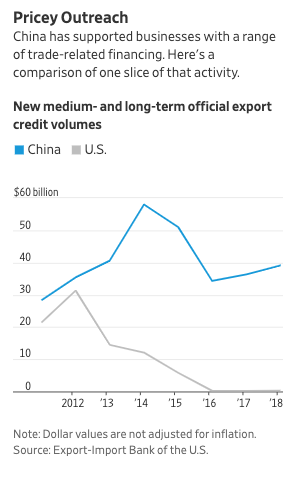 Mr. Xi faces challenges at home, too, arising from slowing economic growth. While Mr. Xi promises a “Chinese Dream” of national rejuvenation and the building of a strong, modern country that is respected globally, China last week said expansion of its gross domestic product in 2019 slowed for the eighth year in the past nine. The 6.1% pace is the lowest since the early 1990s, when China’s economy was far smaller. Trade battles with the U.S. only partly explain the economic cooling. Overpriced property, widespread debt and the effects of a shrinking working-age population all are taking their toll.

In December, Mr. Xi led a Communist Party economic-strategy conclave for 2020 that in its postmeeting statement emphasized economic stability in the face of “a clear increase in risks and challenges at home and abroad.” The statement was notably defensive and contrasted with bold plans of yesteryear.

Many of the global companies that poured investments into China for decades are now disgruntled, or downsizing, or both. More fundamental is the recalibration of the Sino-U.S. relationship being led by Mr. Trump. Just a few years ago, talks between the countries included more than 100 simultaneous bilateral dialogues on issues such as transnational crime and climate change as the world looked toward a G-2 of the U.S. and China for global leadership. More recently, the relationship between Presidents Trump and Xi has largely been pared down to talks over one issue—hammering out a trade deal.

This month’s preliminary trade deal notwithstanding, the abrupt rethink in Washington is epitomized by U.S. efforts to stymie the global reach of Huawei Techonologies Co. out of concern that the telecommunications equipment maker could act as an arm of the Chinese state, despite the Shenzhen company’s rejection of any such characterization. 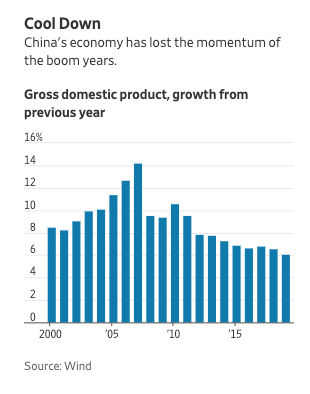 As its domestic economy has downshifted, so has Chinese media rhetoric touting Mr. Xi’s signature international program, the Belt and Road Initiative, which has been weighed down by mounting concerns that its playbook—lend generously to build infrastructure where others won’t—is a recipe for racking up debt in poor countries that are unlikely to pay it back.

“There’s a lot more talk about the setbacks” of the Belt and Road Initiative, says Kai Xue, a Beijing lawyer who handles contracts for the deals.

According to polling data from 34 countries around the world published in December by Washington-based Pew Research Center, 45% of adults surveyed lack confidence that Mr. Xi will do the right thing on world affairs.

Pew says many countries are anxious about China’s military. After Mr. Xi marked the Communist Party’s 70th year of rule in October with a parade adjacent to Tiananmen Square that included intercontinental ballistic missiles, the North Atlantic Treaty Organization for the first time said it would devote new resources to monitor potential risks posed by China’s military. 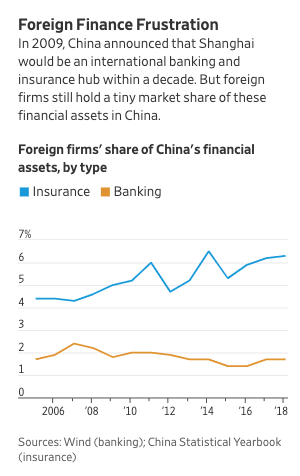 Mr. Xi is greeted with particular suspicion by China’s neighbors and Western countries, where Beijing’s treatment of antigovernment protests in Hong Kong and of the Uighur minority in China’s northwest have attracted widespread criticism.

The international skepticism is in contrast to the expectations after Wall Street’s excesses helped pull down the world economy in 2008. Within months, China’s government had set a 10-year plan to position Shanghai as a financial-center rival to New York. Mr. Xi ran with the idea, successfully lobbying the International Monetary Fund to designate China’s yuan as one of five global “reserve currencies” and promoting Shanghai’s Pudong financial district as a free-trade zone, promising foreign banks, insurers and brokerages easier access.

The result has underwhelmed. The yuan languishes as the world’s eighth most widely traded currency, the free-trade zone has fizzled, and foreign banks control only 1.7% market share in China, less than the 2.2% they had in 2008.

Marcus Wassmuth, a veteran banker in Shanghai and board member of the European Union Chamber of Commerce in China, says “invisible fences” to expansion, such as unexpected licensing requirements, make his industry wary of investing more in Shanghai. As a result, Mr. Wassmuth says: “It’s definitely a financial center, but it is lacking the international.”

At home, questions are swirling about Mr. Xi, too, in particular whether his efforts to revive Communist Party ideology throughout society are damaging the economy. For instance, he has appeared to choose political reliability over profits and efficiency as he throws his support behind government-owned businesses in the form of subsidies, financing, licenses and pressure on competitors. Bankruptcies are running higher than ever in China among private companies, which suddenly have less scope to expand.

On paper, at least, Mr. Xi remains politically untouchable.Nearly two years ago, the Communist Party eliminated presidential term limits. That theoretically allows Mr. Xi to serve well beyond 2023. But just as Mr. Xi’s image has been challenged internationally since Davos in 2017, he also faces grumbling at home.

“It is precisely because he’s amassed so much power and increasingly wields it with such dictatorial disdain for his fellow [party] leaders that he’s under threat,” according to Jude Blanchette, a China specialist at the Washington-based Center for Strategic and International Studies.