With trade, investment, consumer spending and business confidence all in retreat, some economists warn economy could slip further

SHENZHEN, China—A newly sealed trade truce with the U.S. reduced a key source of anxiety for Chinese policymakers but leaves them with another challenge: a need to boost consumer and business confidence as the country faces more downward pressure on its massive economy.

On Friday, Chinese officials said the country emerged from 2019 with an official economic growth of 6.1%—well within the government’s target range of 6% to 6.5% but the lowest level in nearly three decades.

The outlook remains cloudy, and some private-sector economists warn that growth in the world’s second-largest economy could slip even further this year, to below 6%. 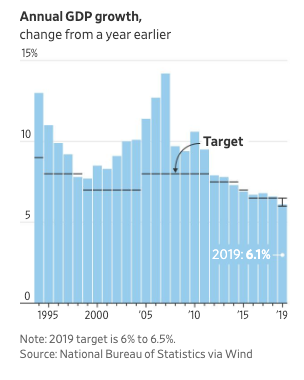 Trade, investment, consumer spending and business confidence are all on retreat, while the economy continues to suffer indigestion from debt that had helped fund its remarkable bulk-up and is proving difficult to slash. The country also faces longer-term stresses like an aging population, which was highlighted by Friday data showing births had fallen to their lowest level since 1961.

Last year’s trade offensive from its chief economic and geopolitical rival, the U.S., in the form of tariffs and a campaign targeting China’s corporate champions, presented a headache for Beijing’s policymakers, taking a toll on exports and business confidence throughout the year. Nomura economists calculate the trade war, coupled with slower global growth, shaved one percentage point off China’s 2019 GDP figure.

The two sides this week took steps to settle the dispute with an agreement by China to import more from the U.S., though tariffs and angst will linger over a commercial relationship that was critical to both countries.

The challenges can be seen in Shenzhen, an export-driven metropolis in Southern China that has been caught in the crosscurrents.

Just over a year ago, Shenzhen was being toasted as the cradle of reforms that set China on a course toward a market-driven economy. In four decades, Shenzhen had transformed itself from a fishing village to a showcase of Chinese high-technology, skyscrapers, trade and wealth.

Shenzhen’s electronics makers were hurt by tariffs on their goods in the U.S., but also by a more-cautious business appetite in other countries. An overheated property market raised the cost of living—and anxieties. 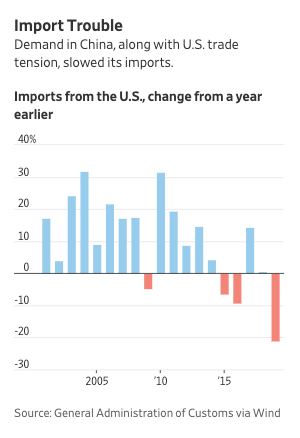 Nontrade factors, too, weighed on sentiment, including mass protests that roiled next-door Hong Kong for more than half a year, clouding the business outlook and drawing global attention to the risk of social unrest in the authoritarian nation. Shenzhen’s celebrated technology sector, including hometown companies like telecommunications equipment maker Huawei Technologies Co. and drone maker SZ DJI Technology Co., is facing new scrutiny from the U.S. and elsewhere.

Pointing to “mounting downward pressure” of slower global growth and trade along with rising instability and risks, China’s National Bureau of Statistics said Friday that “structural, systemic and cyclical problems at home are intertwined.”

In a way, the world has gotten used to Chinese growth that exceeds the global average, and 2019 was no exception, despite the weaknesses. China grew twice as fast as the world’s 3% expansion for the past year and still bested most emerging economies, according to recent estimates by the International Monetary Fund.

Last year’s GDP expansion, to $14.23 trillion, was roughly the equivalent of adding an Indonesia-sized economy to China’s, a year after tacking on an Australia-sized one. Markets did more than hold up last year, with the Shanghai Composite Index rising 22% and the yuan edging 1.3% higher against the U.S. dollar.

“China remains the engine of the global economy with sufficient growth momentum,” Ning Jizhe, chief of the National Bureau of Statistics, told reporters. 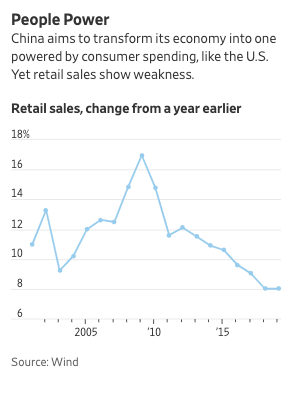 Last year’s growth rate, however, hung well below China’s 9.5% average annual expansion between 1978 and 2017, according to the state-run Xinhua News Agency.

Now, with a ratcheting down in animosity between the two big economies, the spotlight is likely to turn to China’s domestic struggles for 2020. Major government policy for this year includes finalizing a decadelong push to double income levels and the size of the economy from where they stood in 2010, while lifting living standards for a remaining five million people still considered severely impoverished.

Looming over China’s downward adjustment is the question of how much its leadership is managing the process, for example to squeeze out debt, and how much of the slide is beyond government control, like stubbornly high property and pork prices that are pinching spending.

“The medium-term goal to deal with debt and financial risk often clashes with the short-run goal to stabilize growth,” said Julian Evans-Pritchard, an economist at Capital Economics. “At the moment, we’re at a phase where growth and employment come first.”

Beijing’s response to its economic slowdown has divided economists about how aggressively China needs to reflate its economy. So far, authorities have sent mixed signals: sanctioning more construction in places like Shenzhen and introducing a new loan prime-rate system that could lower interest costs for borrowers, but refraining from wholesale stimulus that in the past included official interest rate cuts and big spending programs.

Some official statistics suggest disturbing economic trends. Imports last year slumped 2.8% on weakening demand from companies and consumers—and reflecting trade turmoil, they were down nearly 21% from the U.S., though buying pledges in this week’s trade agreement valued at $200 billion over two years should lift Chinese imports of American goods, including soybeans.

Increasingly, Chinese industrial prices have also headed downhill in a sign of weak demand, and producer prices overall last year fell 0.3%. Car sales slumped 8.2% in 2019, while consumers—whose incomes expanded slower than the economy at 5.8%—were squeezed by pricey pork and an upward creep in crude oil.

In cities like Shenzhen and Shanghai, office vacancy rates are solidly in the double-digit percentage points as companies quietly downsize. Property is a risk that could pose a major drag on the economy, potentially by the second half of 2020, according to Zhu Haibin, JP Morgan’s chief China economist. 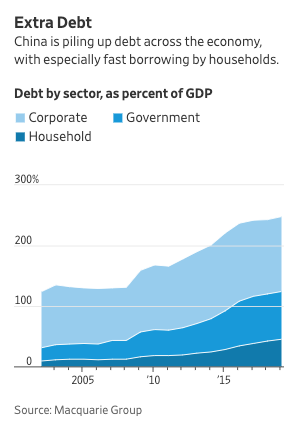 To keep the headline growth figures up, China has turned in part to reviving tried-and-true growth drivers like government investment in construction, which carries the risk of undoing efforts to limit debt. Property investment grew 9.9% last year, slightly faster than the 9.8% rate in 2018, though fixed asset investment expanded only 5.4%, about a third as fast as it was growing six years ago.

In Shenzhen, policymakers are pushing construction of a new district called Qianhai, pitching it as an experimental financial hub in the shadow of China’s increasingly unreliable financial hub, Hong Kong. Yet skyscrapers and subway line extensions appear to be less powerful economic spurs than they once were, and the activity is doing little to ease anxieties among Shenzhen businesspeople who express concern about trade with the U.S. and Hong Kong, plus some of the highest living costs in the country.

Even as the local government offered to halve rents on some buildings, vacancy rates there have lifted the city average toward 25%, according to brokerage Jones Lang LaSalle. At the same time, Shenzhen’s exports and consumption weakened, dragging down the city’s growth to a pace of 6.6% by the third quarter, compared with 7.4% in the first half of 2019, according to official data.

—Bingyan Wang and Grace Zhu contributed to this article.