Major central banks have seen more internal dissent over adding stimulus or have opted to leave monetary policy unchanged in recent weeks, a shift after a wave of easing earlier this year amid cooling global growth.

Central-bank “hawks,” who mostly oppose stimulus and support raising rates to guard against excessive inflation, have become more vocal, saying such efforts aren’t needed for expanding domestic economies with low unemployment. Some also warn such measures can risk investment bubbles and other harmful side effects.

“The economic situation is not all that bad,” Jens Weidmann, who sits on the European Central Bank’s rate-setting committee, told a German newspaper this month. “I will do what I can to ensure that interest-rate increases are not put off for any longer than necessary.”

At the U.S. Federal Reserve and ECB, the so-called doves have prevailed, winning support this month for a rate cut as insurance against the risk that the global slowdown could deepen and spread, amplified by geopolitical factors such as trade tensions and the Brexit debate.

“It’s becoming more difficult for investors to read central banks,” said Frederik Ducrozet, an economist with Pictet Wealth Management in Geneva. “The market is probably getting a bit ahead of itself in pricing more rate cuts.”

Fed Chairman Jerome Powell last week cited “slower growth abroad and trade policy developments” as the rationale for cutting the central bank’s benchmark rate by a quarter percentage point, to a range between 1.75% and 2%.

He won on a 7-3 vote, the most formal dissents on a policy decision since he took the helm in February 2018. The two hawkish dissenters thought a rate cut unnecessary; but a dove wanted a bigger, half-point cut.

The 17 Fed officials present at the policy meeting in Washington—10 voters and 7 nonvoters—were divided as well over whether they were likely to lower rates again this year, according to their economic projections.

In Frankfurt, ECB President Mario Draghi faced an unprecedented rebellion over a package of rate cuts and bond purchases unveiled on Sept. 12 that had been hotly anticipated by investors.

The move, which Mr. Draghi described as a reaction to weak international trade and global uncertainties, was opposed by at least seven of the 25 members of the ECB’s rate-setting committee.

One of the resisters, German-born Sabine Lautenschläger, resigned unexpectedly Wednesday in the wake of the vote. She had argued against the ECB’s stimulus package, pointing in an August interview to signs of strength in the eurozone economy. 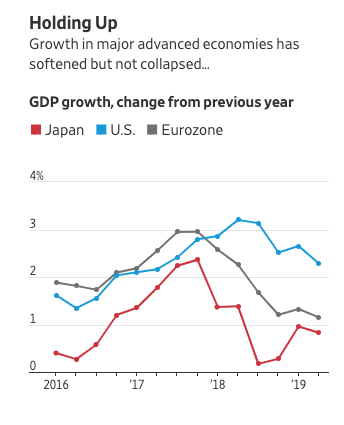 Still, Mr. Draghi’s policies are unlikely to be reversed before he leaves office at the end of next month, or any time soon by his successor, Christine Lagarde.

Central banks in Japan, Switzerland and the U.K. held rates steady this month, despite market hopes that they would follow the Fed and ECB. Norway’s central bank raised rates in September, and Sweden’s central bank suggested it could soon follow suit.

To be sure, some emerging-market economies that are exposed to global uncertainties are still cutting key interest rates. But across advanced economies, policy makers are divided over the cloudy economic outlook.

The doves see cause for concern. Manufacturing activity has fallen or weakened across several major economies. Business sentiment and investment have faltered. Markets have swung in response to the twists and turns of the U.S.-China trade war. Two global economic heavyweights—China and Germany—are wobbling.

But the hawks see the economic cup as half-full. The U.S. and Japan, the world’s first and third largest economies, are growing modestly. Unemployment has rarely been lower across advanced economies. Consumers and the service sectors, which account for much more economic activity than factories, are holding up well. Meantime, the geopolitical risks could dissipate, for instance if Washington and Beijing strike a trade agreement or if London and Brussels forge a Brexit deal.

“There is indeed some increasing uncertainty…but we also see signals of strength in the euro area,” Ms. Lautenschläger said in an interview last month. “It is much too early for a huge package.”

Other European hawks worry that the aggressive stimulus policies such as negative interest rates and large-scale bond purchases pose their own risks. Dutch central-bank Gov. Klaas Knot criticized the ECB’s latest stimulus package in a statement, noting worrisome signs of bubbles in housing and other assets and a shortage of low-risk government bonds as a result of the central bank’s purchases.

In the U.S., Boston Fed President Eric Rosengren explained his recent hawkish dissent in a statement, saying more stimulus was “not needed for an economy where labor markets are already tight” and could fuel financial instability.

Mr. Powell also noted the U.S. economy’s strengths, but said at a press conference last week that the Fed rate cut was needed to keep the expansion going. “We are adjusting monetary policy…to try to support what is in fact a favorable outlook.”