Smoke rose from the site of the explosion at a warehouse. PHOTO: MOHAMED AZAKIR/REUTERS

The blast occurred after a warehouse with highly explosive material caught fire; Trump says U.S. military leaders cite ‘a bomb of some kind’

Dozens of people were confirmed dead and thousands more injured after a massive explosion caused by a warehouse fire rocked Lebanon’s capital city of Beirut.

The warehouse held highly explosive material, said an official with Lebanon’s army who added that the blast was likely caused by a fire and wasn’t an attack. President Trump, however, on Tuesday evening called it a “terrible attack” and said U.S. military leaders believe the explosion was caused by “a bomb of some kind.”

The explosive material, which Lebanese officials identified as ammonium nitrate, had been kept at the warehouse for the past six years, according to Prime Minister Hassan Diab. “All those responsible for this catastrophe will pay the price,” Mr. Diab said.

At least 50 people were killed and 2,750 wounded because of the explosion, Lebanon’s health minister said.

The explosion, which produced a giant orange mushroom cloud over the city, was yet another trauma for Beirut residents who have survived wars and numerous bombings in the past. They now face the challenge of rebuilding at a time of strained resources due to the coronavirus pandemic.

The blast is the latest blow for Lebanon, a country already reeling from multiple crises in recent months, ranging from large street protests over government corruption to an economy on the brink of collapse after years of mismanagement. Before the explosion, which shook the whole of Beirut, Lebanon’s economy was in free fall and ordinary Lebanese citizens were struggling with soaring prices of food and other goods, as well as long daily power cuts.

The explosion destroyed one of Lebanon’s most important international ports and severely damaged Beirut’s cosmopolitan city center, with its neighborhoods of restaurants and concrete apartment buildings, and its iconic corniche on the Mediterranean. The city’s core neighborhoods, home to countless cafes, bars, and artist studios, are at the heart of Beirut’s role as a regional cultural hub with global aspirations.

The shock wave and vast plume of smoke quickly transformed the city center into a surreal scene blanketed in dust and debris as stunned residents fled their homes and rushed the wounded to hospitals. Vehicles carried injured people, their arms and legs hanging limp from car windows. Dust hung in the air.

The blast damaged the facades of apartment blocks nearby, shattered windows and tore balconies and doors asunder. It blanketed the streets with dust and broken glass. Bloody and injured people were trying to reach hospitals and wave down ambulances, which struggled to navigate streets filled with debris and wrecked cars.

The explosion left a swath of destruction at Beirut’s port, one of Lebanon’s vital economic arteries. Video footage reviewed by The Wall Street Journal showed a swath of rubble, piles of metal and burning fires at the port.

The Lebanese health ministry requested that the wounded be brought to hospitals in areas surrounding Beirut to relieve pressure on facilities in the capital, the state news agency reported. Lebanese President Michel Aoun directed the military to help respond to the blast, the agency also reported.

“Having witnessed the horrific explosions at the Port this evening, our heartfelt sympathies go out to the victims and their families. We mourn each loss from this terrible tragedy alongside the Lebanese people,” said the U.S. ambassador in Beirut, Dorothy Shea, according to the embassy’s official Twitter account.

Presumptive Democratic presidential nominee Joe Biden wrote on Twitter: “Our hearts and prayers are with the people of Lebanon, and the victims of the horrific explosion in Beirut. I urge both the Trump Administration and international community to immediately mobilize assistance to the thousands injured in the blast.’’

Hospitals quickly overflowed with those arriving with injuries from the blast. 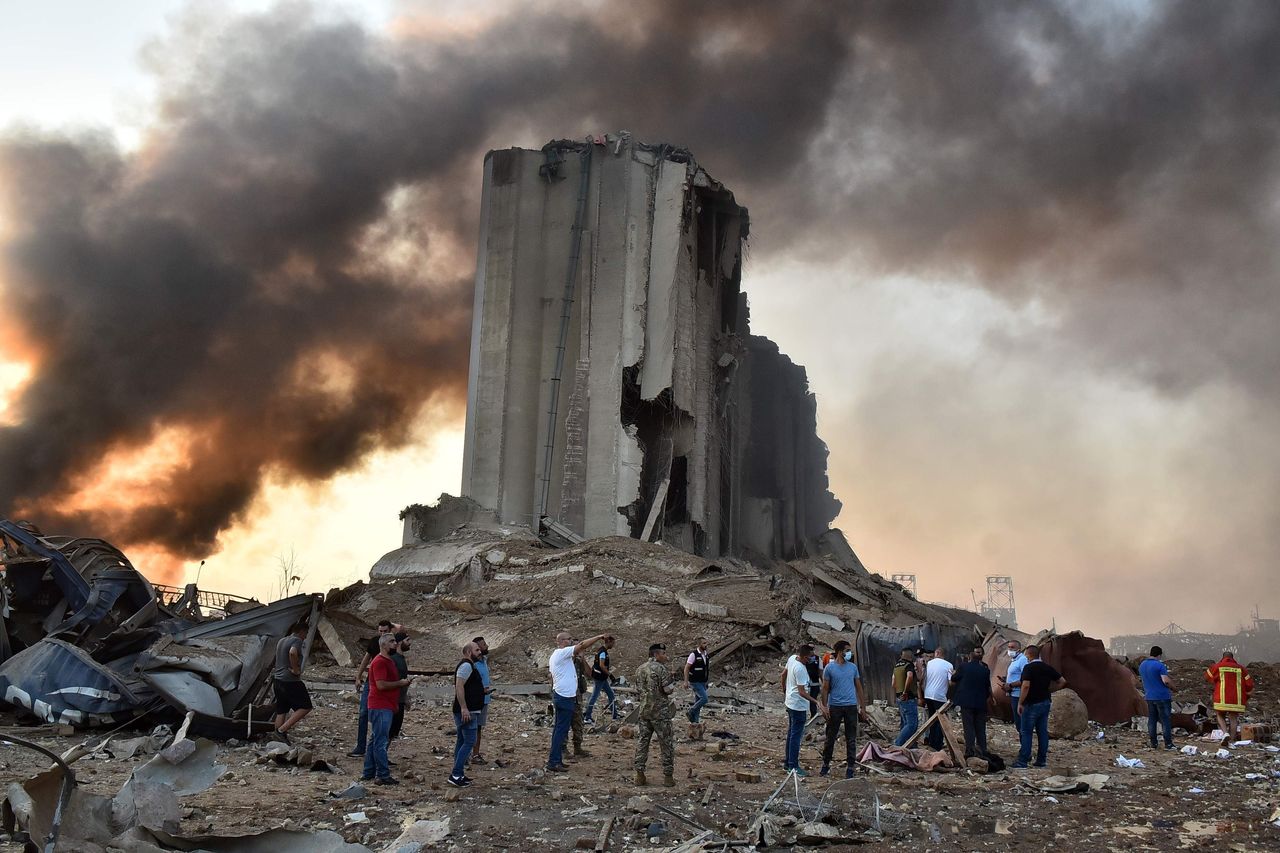 Riad Toghosian was in his restaurant several miles away from the site of the blast. “The walls and the glass shattered on us. It was like a giant earthquake,” he said.

In Gemmayzeh, a Beirut neighborhood near the blast known for its trendy bars and restaurants, a team of Red Cross workers were treating the wounded in a parking lot. The workers stopped a passing car and asked them to get one of the injured to the hospital.

“They won’t die. They need to get to the hospital,” the worker yelled at the driver. “They will admit you. They know you are coming,” he said.

The blast was so large that residents reported noise and rattling windows seemingly related to the explosion some 140 miles away in Cyprus, according to the European-Mediterranean Seismological Centre, an independent scientific body that monitors earthquakes.

It was one of the most powerful in memory in Beirut, a city that has survived a series of wars and other crises in recent decades. Residents described it as larger than the truck bomb that assassinated former Prime Minister Rafiq Hariri in 2005 and rivaling the bombs dropped by Israeli warplanes during the 2006 war that devastated Lebanon. The damage included areas in the city center which were rebuilt following the Lebanese civil war that raged throughout the 1980s.

In 1983, a massive truck bombing killed 241 Americans at a Marine Corps compound in Beirut, the first time a vehicle bomb was used to such devastating effect in the country. In 2015, a double suicide attack by Islamic State attackers killed at least 43 Beirut residents.

The explosion came at a time of economic and social crisis in Lebanon as the country wrestles with the coronavirus pandemic and the prospect of financial ruin. The country’s economy was already struggling before the pandemic, but a lockdown imposed to fight the virus has pushed the country to the brink.

Beirut residents are grappling with long power outages and shortages of foreign currency as Lebanon’s economy is expected to contract by 12% this year, according to the International Monetary Fund.

The explosion also comes amid increasing tension between Israel and Hezbollah. The Israeli military said last week that it exchanged fire with Hezbollah militants on its border with Lebanon. Prime Minister Benjamin Netanyahu has warned repeatedly that Hezbollah was embroiling Lebanon in a conflict with Israel. 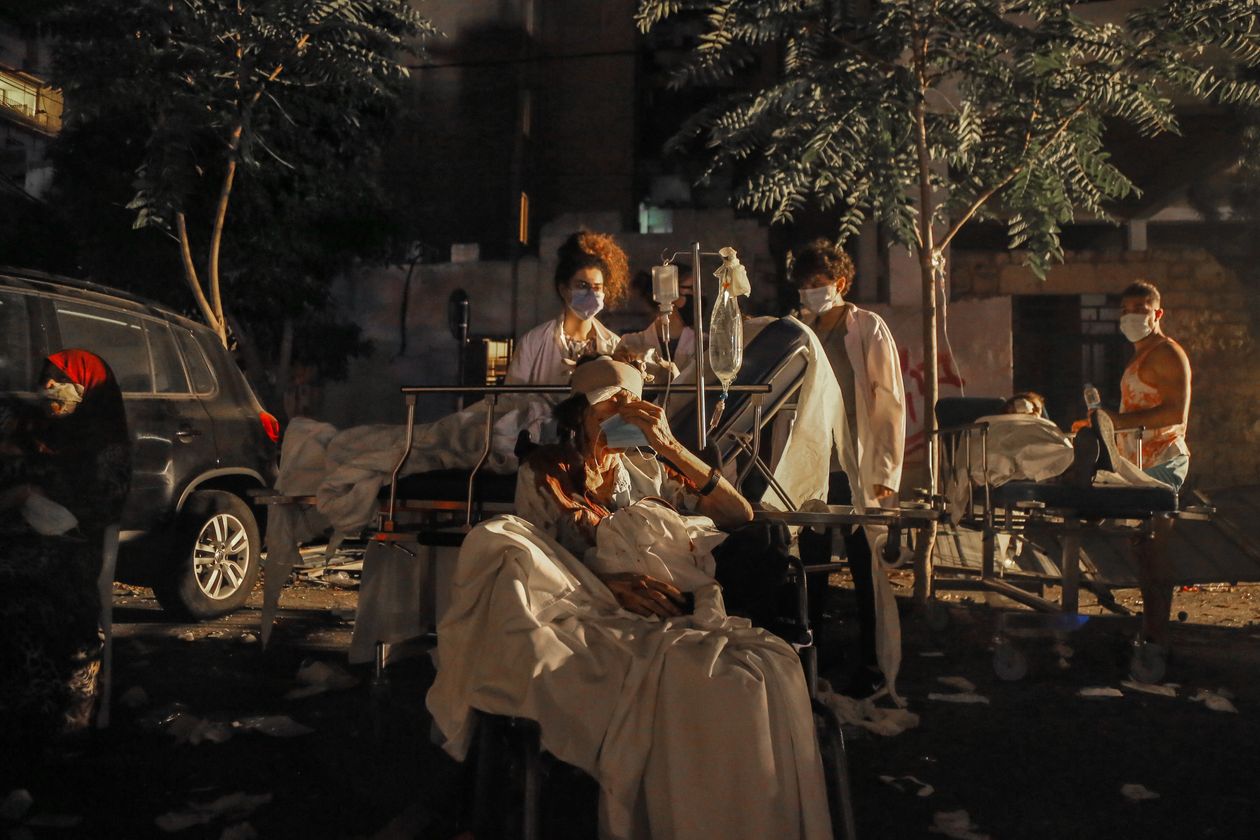 An Israeli government official said Israel had no involvement in the explosion in Beirut. The Israeli military declined to comment on the incident.

The blast at the port also damaged a ship belonging to UNIFIL, the United Nations peacekeeping force stationed in Lebanon, and injured a number of U.N. peacekeepers, some of them seriously, the organization said. The injured peacekeepers were taken to nearby hospitals, UNIFIL said.

Lebanon’s health infrastructure is stretched to its limits following a number of confirmed Covid-19 cases in the past few weeks. On Tuesday, 177 new cases were recorded, according to Lebanon’s health ministry. Economic pressures have also put the country’s hospitals under strain. The American University hospital in Beirut laid off hundreds of staff in July, citing the economic crisis.

Lebanon’s Red Cross said 75 ambulances and 375 emergency medics were responding to the blast across Beirut.

Beirut’s hospitals are at capacity and patients are being moved into other hospitals, according to George Kittani, the head of Lebanon’s Red Cross. The hospitals of the nearby Metn district are also nearing capacity, he said.

Mr. Kittani said there were more than 2,200 casualties. “We are still tallying the numbers, nothing is clear,” he said.

“Emergency room is very busy,” said Firas Abiad, the manager of Rafiq Hariri University Hospital, which has been the main public hospital treating coronavirus patients. “One patient passed away. 66 injured patients received so far. More to come, we are informed. Most have glass injury, some deep.”

The Risks of Rushing a Coronavirus Vaccine

Covid-19 Testing Is Hampered by Shortages of Critical Ingredient