Regulators are investigating the Nissan Rogue’s auto-braking feature, and Nissan said it is cooperating with the probe. PHOTO: DREW ANGERER/GETTY IMAGES

As Automatic Braking Becomes More Common in Cars, So Do Driver Complaints


PARTAGER As Automatic Braking Becomes More Common in Cars, So Do Driver Complaints

Technology cuts down on crashes but can also activate when there is no risk; ‘I was so scared’

Automatic emergency-braking systems that are promoted as a safety feature in vehicles don’t always work as intended and at times activate when there is no risk of a crash, drivers say.

Drivers have reported several hundred incidents to U.S. regulators in recent years of these brakes malfunctioning or not deploying properly, highlighting the challenges car makers face in introducing new technologies that automate more of a car’s driving functions.

The automatic braking features use cameras, sensors and radar to detect objects and can hit the brakes if the driver doesn’t act fast enough. Safety advocates say the technology has significantly reduced accidents and can save lives, and auto makers view such crash-avoidance systems as a critical part of developing autonomous cars.

But the National Highway Traffic Safety Administration has fielded more than 400 individual complaints in the last three years from drivers of vehicles made by Nissan MotorCo. , VolkswagenAG , Honda MotorCo. and other major car manufacturers flagging auto-braking problems, according to a Wall Street Journal analysis of the agency’s public database.

Most are from drivers saying they have had trouble with the automatic brakes deploying suddenly when there is no evidence of danger—at highway speeds, in some cases. Some drivers also reported braking systems failing to engage as expected in the presence of a threat. 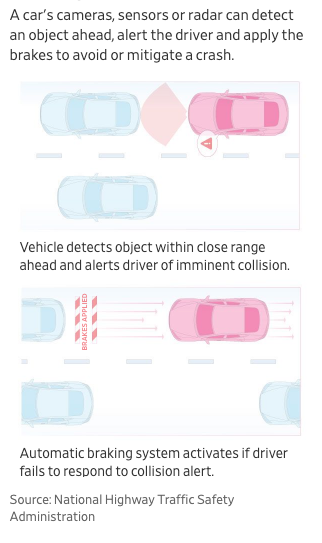 Fourteen complaints involved a crash, with most of those drivers describing the car braking so suddenly it was rear-ended by a trailing vehicle. One driver reported losing control of the car when it unexpectedly hit the brakes at highway speed, causing it to spin out and crash into a guardrail.

No fatalities were reported in the complaints, but three indicated the crashes resulted in injury. Another 18 people reported being hurt by the abruptness of the car activating the brakes without a collision. Some drivers also complained the feature stopped their car unexpectedly over a railroad crossing.

Cynthia Walsh, the owner of a 2018 Nissan Rogue, said she was driving the sport-utility vehicle on the highway in February at 65 miles an hour when the car slammed on the brakes for no apparent reason.

She took the vehicle to the dealership twice for fixes, but she said the problem persists. Now, she said, she is frightened to drive it.

NHTSA this spring began investigating the Rogue’s auto-braking feature after the Center for Auto Safety, a membership-based advocacy group, petitioned the agency to open a defect probe, citing 87 complaints of false braking activations. The center has argued the incidents are a safety risk and the vehicles should be recalled.

Nissan said it is cooperating with NHTSA and has identified problems with brakes improperly deploying in certain road conditions, such as railroad crossings, bridges and low-hanging traffic lights, on its 2017 and 2018 Nissan Rogue and Rogue Sport vehicles. The car company is asking owners to bring the affected vehicles to dealerships for a software fix. The action, which isn’t a recall but a voluntary customer-service campaign, covers more than half a million of the SUVs.

Nissan said Ms. Walsh’s vehicle received the recommended software update and it continues to work with her. 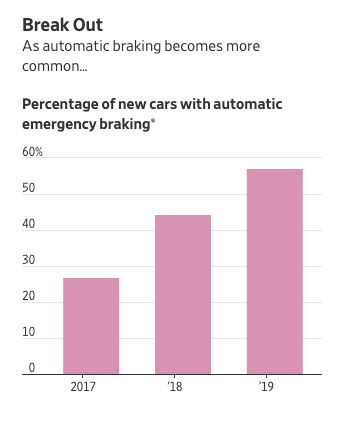 Volkswagen said it fully cooperates with NHTSA on any query or investigation and works with dealers to better understand consumer complaints. Honda said it has been in contact with NHTSA regarding its auto-braking technology and there are currently no defects.

The Insurance Institute for Highway Safety, a group backed by car insurers, said in June that the rate of rear-end collisions was 50% lower for cars equipped with automatic braking. The group estimates the feature will prevent 28,000 crashes and 12,000 injuries by 2025.

NHTSA said auto braking can reduce the severity of crashes and help save lives, but warned the technology isn’t defined uniformly within the auto industry and the agency will closely monitor data sources for safety risks. 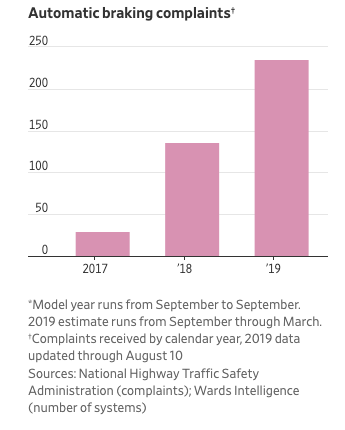 Often, the systems vary in both their capabilities and how they operate, and there is little standardization on what they are called, creating confusion among drivers.

“There is a ridiculous number—some 40 different names for automatic emergency braking,” said Greg Brannon, director of auto engineering at AAA. “It leads to a high degree of consumer confusion.”

Auto manufacturers have recalled nearly 180,000 vehicles in the U.S. since 2015 to fix issues with their automatic braking systems, according to the Center for Auto Safety, which is based in Washington.

The volume of complaints is notable for a new safety feature intended to prevent accidents, said Jason Levine, the center’s executive director.

Automatic emergency braking is among a number of new active-safety technologies emerging in newer cars that aim to help prevent crashes. The new technologies can also, for example, steer a car back into the lane if it drifts and alert drivers to cars passing in their blind spot.

Regulators have been pushing such technologies as a way to reduce traffic fatalities. Nearly all auto makers have pledged to make automatic-emergency braking standard across their lineups by 2022.

An estimated 44.5% of all 2018 model-year vehicles sold in the U.S.—about 7.6 million—were equipped with automatic emergency brakes, according to Wards Intelligence, a data analytics firm.

There is a learning curve for drivers. Many aren’t even aware their car has the technology, much less know if it is working correctly, industry analysts say.

Some automatic braking systems activate for pedestrians, while others engage only for other cars. Some try to avoid a collision entirely, while others aim only to slow the car and reduce the impact of a crash.

Auto makers say automatic braking mishaps are often the result of “false positives”—the vehicle’s computer getting confused by a nonthreatening object like an overhead sign or a shadow and triggering the brakes.

Calibrating the car’s detection software to be discerning enough to identify hazards but filter everything else out is a challenge, said Wayne Powell, vice president of electronic systems at Toyota Motor Corp. ’s North America division. Toyota now includes automatic braking on more than 90% of the cars it sells in the U.S.

“Getting it to not put on the brakes when it shouldn’t is a very, very hard problem,” Mr. Powell said. “If your car is putting on the brakes all the time unnecessarily, you won’t trust your car.”