DUBAI—Aramco revealed a steep drop in profit related to attacks on its facilities in September that briefly halved the Saudi company’s oil output, highlighting the risks to investors ahead of what could be the world’s largest initial public offering.

The Saudi Arabian Oil Co., as Aramco is officially known, delayed its highly anticipated initial public offering last month until it had published the earnings, hoping to demonstrate the resilience of its operations. At the launch of the IPO last weekend, Chairman Yasir al-Rumayyan said the Sept. 14 attacks didn’t have a material impact on the company’s financials.

In a 600-page share-sale prospectus released Saturday, Aramco revealed its quarterly revenue declined in line with oil prices while net profit dropped at a faster rate on higher costs associated with the attacks.

Saudi Arabia’s ability to protect its prized assets and withstand future assaults will be an important factor for potential investors calculating Aramco’s value in its planned IPO. In the prospectus, Aramco highlighted the risks to investing in the company, including a warning that “terrorism and armed conflict may materially and adversely affect” operations. 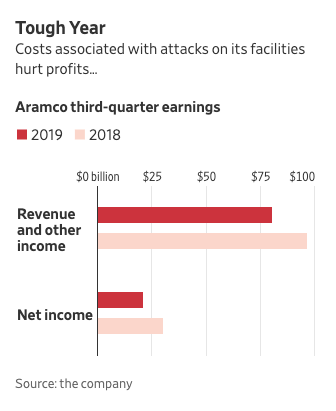 De facto ruler Crown Prince Mohammed bin Salman has pushed for the listing as a way to raise a one-off windfall to fund planned investments in other industries. The effort is part of a broader plan to make Saudi Arabia’s economy less dependent on the volatility of global oil demand. The attacks risked derailing that goal and demonstrated the vulnerability of the kingdom’s oil fields to sabotage. 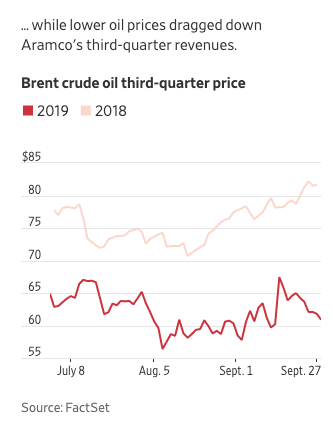 Though Aramco returned to full oil production within weeks of the attacks on its Abqaiq and Khurais oil facilities, it was forced to import oil to feed its domestic refineries and ensure it exported its own products to maintain customer demand. Purchases and other costs increased in the third quarter, causing net profit to fall to $21.2 billion from $30.3 billion in the same period last year, according to the prospectus.

Average oil prices were roughly $62 during the July-to-September quarter, compared with $75 a year earlier, according to a Wall Street Journal analysis of FactSet data.

The Saudi government has been taking measures to better secure its oil fields. Since September, the U.S. military has deployed an additional 2,000 troops, two squadrons of jet fighters, three new antimissile systems and other equipment to Saudi Arabia in an effort to better prepare the kingdom to counter Iran.

Aramco now wants to demonstrate its resilience, said Uday Patnaik, an emerging-market investor at U.K.-based asset manager LGIM. After the attack, the company is saying, “Look, the safeguards are up,” Mr. Patnaik said.

The company published the prospectus document in the next step toward what could be the world’s largest IPO. Investors had hoped to learn how much Aramco intends to list. But the energy giant didn’t disclose a size for the listing, noting it would make a decision in early December.

For the next few weeks, Aramco and its advisers will use a marketing period to determine the offering’s price and issue size based on demand, ahead of a planned listing on the local Tadawul stock exchange. A book-building process will run from Nov. 17 to Dec. 4, during which time institutional investors will be expected to submit orders. Individual investors have until Nov. 28 to submit a request for shares, according to the prospectus.

Investors have said they expect the oil giant to list at least 2% of its share capital. Prince Mohammed has put the company’s value at $2 trillion, which would raise about $40 billion.

But many international investors see that valuation as ambitious. Bankers working on the deal have said the company is worth between $1.3 trillion and $1.7 trillion.

A $1.5 trillion valuation makes sense when comparing dividend yields, an important investor gauge. Aramco has said it would pay out $75 billion in dividends next year, and at that valuation, the company would offer a 5% dividend yield—typical for global oil giants. Royal Dutch Shell PLC has a dividend yield just over 6% and Chevron Corp. just below 4%.

After comparing Aramco with its peers, most investors are also expected to apply a discount to Aramco’s valuation for some of the risks unique to the company, such as the potential for more attacks on facilities.

To tempt investors to look beyond the risks, bankers are telling them Aramco’s dividend will likely increase 10% a year and minority shareholders are guaranteed to receive a payment before the Saudi government.