Aramco shares rocketed up 10% as the oil giant started trading in Saudi Arabia. WSJ's Alex Frangos explains why local investors rushed to buy a piece of the world's largest ever IPO.

Shares hit an upward limit set by the Saudi exchange

DUBAI—Aramco shares rose 10% in Riyadh on Wednesday, quickly touching their upward limit, as investors in Saudi Arabia rushed to buy a piece of the world’s largest initial public offering.

The trading debut caps a four-year drive by Crown Prince Mohammed bin Salman to deliver the listing of state-backed Aramco. The public offering of the world’s most profitable company is part of a sweeping overhaul of the kingdom’s economy to invest in non-oil industries and create jobs for young Saudis.

The listing falls far short of Prince Mohammed’s original goals. He had hoped to sell more than 1.5% of the company, known officially as Saudi Arabian Oil Co., and raise up to $100 billion. The Saudi government couldn’t entice enough foreign investors to buy at the $1.7 trillion valuation it set and Aramco instead raised only $25.6 billion, largely from Saudis.

The shares increased from an IPO price of 32 Saudi riyals ($8.53) to 35.2 riyals in initial trading, with the rise capped by an upward limit set by the exchange. 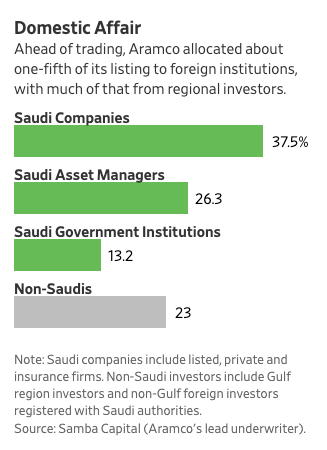 In a ceremony in Riyadh, Saudi officials and the company’s delegates gathered at the stock exchange to mark the start of trading, ringing a gold bell as confetti showered them and laser lights zipped around the stage.

Sarah al Suhaimi, chairwoman of the kingdom’s Tadawul stock exchange, called the listing, “an extraordinary event in the kingdom of Saudi Arabia and the world at large.”

Many international investors have argued that at the valuation of $1.7 trillion, Aramco’s IPO was too expensive compared with peers such as Exxon Mobil Corp. and Chevron Corp. Global investors have placed a greater discount on Aramco’s shares than Saudi and regional investors over concerns about the power the Saudi government will continue to wield over the company and the risks to its facilities in the wake of recent missile attacks that the U.S. blamed on Iran.

Aramco’s underwriters can exercise an option to sell up to 15% more shares during the first 30 days should demand prove higher than expected. That would increase the money raised to nearly $30 billion. Even without the option, the listing is the world’s largest ever, edging out Alibaba Group Holding Ltd. ’s $25 billion listing in 2014.

The jump in the share price lifted Aramco’s total valuation to $1.877 trillion. The shares hit the 10% limit in an initial auction and continued to trade at the limit price throughout the day, even though investors couldn’t push up the price and could only offer less.

The shares would need to reach 37.5 riyals to value Aramco at $2 trillion—a level Prince Mohammed has said he believes the company is worth.

The government has encouraged wealthy Saudi families, who own large conglomerates, to invest as a national duty, The Wall Street Journal has reported. Stock analysts don’t consider them easy sellers. Some were caught in a government-led corruption crackdown and arrests of businessmen and princes in 2017 stifled criticism of the monarchy.

Aramco also received commitments worth roughly $2.5 billion from regional allies Kuwait and Abu Dhabi, which also are unlikely to sell in the early days of trading.

In total, non-Saudi institutional investors were allocated about 23% of the total 2 billion shares available for professional buyers, or roughly $3.94 billion, according to a statement Tuesday from the lead underwriter. That includes commitments from regional allies, and market analysts expected about $600 million in potential bids from regional equity funds based outside Saudi Arabia.

Traditionally, Saudi IPOs have started positively because the government has used the market as a way to transfer wealth to the population. Shares have been priced favorably as a result. In the Aramco IPO, the company has promised individual investors an additional bonus share for every 10 held for six months.

“It is the best investment we could have ever done,” said Khalid Oraibi, a 29-year-old shop manager in Riyadh who bought with his two brothers. “I’m sure in a couple of years we would be so happy we did it.”

The Saudi government also has intervened consistently in the market in recent years to boost prices. Many stock analysts expect the government would support Aramco’s stock, given the profile of sale.

On the surface, Aramco’s blockbuster IPO might seem like a sure bet. But investors who are looking to put money into the world’s most profitable company have to factor in a number of risks before rolling the dice.

Traders also know the shares could be supported in the next few weeks by an influx of foreign passive investment flows. MSCI Inc., the largest index compiler in emerging markets, and FTSE Russell have both said they would fast-track Aramco’s inclusion into equity indexes, tracked by global active and passive investors. Analysts predict Aramco’s addition could draw more than $2 billion in passive flows to the kingdom.

The breakdown of stock allocation in the IPO also indicated the share price would be supported in initial trading. Of the final allocation of shares to institutional investors, Saudi companies made up 37.5%, government institutions 13.2%, and asset managers and pension funds 26.3%. Non-Saudis made up the rest.

Despite what may prove to be loyal support from investors, the stock will also be tied to volatile crude-oil prices. Wednesday, oil prices declined after data from the Organization of the Petroleum Exporting Countries and the U.S. signaled ample supplies will continue into 2020. West Texas Intermediate, the U.S. benchmark, traded down 0.86% to $58.86 a barrel. Brent crude, the global measure of price, fell 0.9% to $63.75.