The world desperately needs new antibiotics to tackle the rising threat of drug-resistant superbugs, but there is little reward for doing so.

Instead, the companies that have stepped up to the challenge are going bust.

Makers of newly approved antibiotic drugs are struggling to generate sales because doctors prescribe the treatments sparingly. The new drugs compete with older, cheaper products, and patients typically take them for only a week or two at a time. 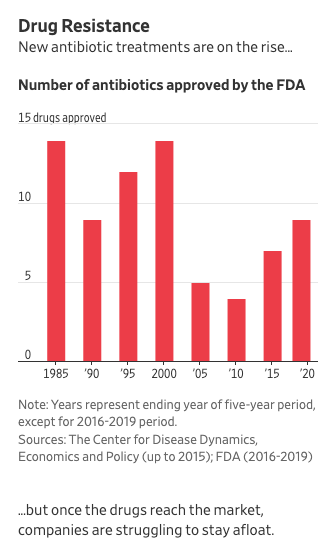 One of America’s biggest antibiotics specialists, Melinta Therapeutics Inc.,MLNT +6.51% filed for bankruptcy in late December, citing slow sales growth and high costs. Its collapse followed that of Achaogen Inc.AKAOQ 2.23% in April, less than a year after it launched a new antibiotic for difficult-to-treat urinary-tract infections. Other makers might soon face a similar fate, saying their cash will run out before the end of 2020. “We don’t know the fate of those drugs for our patients,” said Helen Boucher, chief of infectious diseases at Tufts Medical Center in Boston. “As a physician, that’s my biggest concern.”

Achaogen’s Zemdri drug was sold for about $16 million, a fraction of the roughly $300 million spent developing it. The lack of return is already causing some companies to rethink their antibiotics research—and prompting calls from investors, executives and doctors for an overhaul of how antibiotics are paid for. “We got everything right, and it still didn’t work,” said Ryan Cirz, who led research at Achaogen. 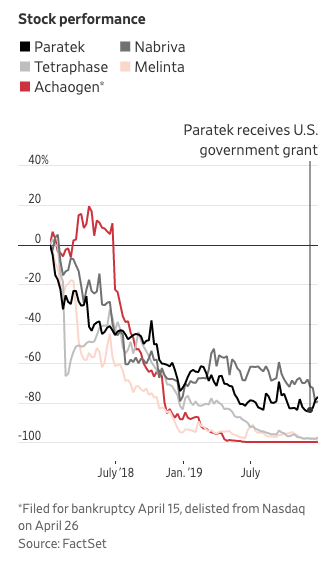 Investors warmed to antibiotics companies in recent years, partly thanks to a big push by the U.S. government to reinvigorate research after most large pharmaceutical companies abandoned the area. Since 2010, it has provided more than $1 billion to support drug development. A 2012 law made it easier to win regulatory approval and granted patent extensions for antibiotics that addressed the biggest public-health threats.

A spate of deals, including Merck & Co.’s $8 billion purchase of antibiotics developer Cubist, boosted investor interest. But most small companies weren’t acquired, and they are home to more than 90% of antibiotics under development, according to research by the Pew Charitable Trusts. Once their new drugs hit the market—a moment most companies would cheer—they are on their own to fund sales and marketing costs, with far less revenue than their peers.

Makers of new antibiotics don’t expect their products to generate the billion-dollar-plus revenues that some of their predecessors enjoyed. Antibiotics are now used more carefully than in the past, as doctors became aware that overuse accelerated the development of drug resistance in bacteria.

To be a commercial success, a new antibiotic would need to make at least $300 million a year at peak, said Patrick Heron, general partner at venture-capital firm Frazier Healthcare Partners, which has invested in several antibiotic companies. That is modest compared with the $1 billion-plus in annual revenue expected of a successful drug in other parts of the industry, but far more than new antibiotics typically make currently.

New antibiotics struggle to make headway in part because hospitals are incentivized to choose the lower-priced option. Insurers pay hospitals a fixed fee for treating a patient with an infection, regardless of which drugs are used. While new antibiotics cost much less than new drugs for cancer or heart disease—typically a few thousand dollars for a course of treatment—they compete with older antibiotics that cost just a few dollars per dose.

“What wasn’t predicted was how little new antibiotics, once they reached the market, would be used, and how much hospitals and providers would stick to the existing generic products,” Mr. Heron said. He said he wouldn’t make any new investments in antibiotics companies until the market changes.

Dim commercial prospects for new antibiotics are at odds with their value to society, as bacteria and fungi develop new mechanisms to overcome older drugs. Superbugs now kill more than 35,000 people a year in the U.S. and sicken 2.8 million, according to a recent report from the Centers for Disease Control and Prevention.

Poor returns are taking a toll on research. Tetraphase Pharmaceuticals Inc. in 2019 cut all its research programs, to funnel cash into launching its only approved drug. The company says it has enough cash only until the third quarter of 2020 and is seeking a loan to remain afloat longer.

Washington has taken notice of the problem, but near-term action remains unlikely. The Disarm Act, short for Developing an Innovative Strategy for Antimicrobial Resistant Microorganisms and introduced in Congress in 2019, would have Medicare pay for certain antibiotics in full. Despite bipartisan support for the bill, executives worry its progress could be hindered by impeachment proceedings and the coming election.

Such a change in payment practices would have an “immediate, positive impact,” said Ted Schroeder, chief executive of Nabriva Therapeutics PLC, which makes an antibiotic for pneumonia. If it doesn’t happen this year, he said, “it’s a pretty bleak future.” Nabriva says it has enough cash to last until the fourth quarter of 2020.

Mr. Schroeder and others say the Disarm Act would be an important step but more measures are needed to address the deeper issue—that new antibiotics are being prescribed sparingly.

Potential fixes include a Netflix -style drug subscription model, which would pay companies for access to their drugs regardless of the number of doses used. The U.K. plans on piloting such a system in 2020. Another idea is a “market entry reward,” a one-time sum paid to companies that launch a new antibiotic.

But for now, these potential changes are hypothetical. “The longer we wait for a sustainable solution, the more companies will die, and the more the earlier pipeline will degrade,” said Kevin Outterson, professor of law specializing in the antibiotics market at Boston University. “That’s my real fear.”

A Big Question in Retirement Planning: How Long Will I Live?