PARTAGER A Paper Twist in the War on Plastic

Shares in European packaging companies like Mondi are cheap for a reason, but should benefit from a consumer backlash against plastic

Not all environmentally friendly investments are expensive at the moment.

Paper-packaging companies such as Mondi,MNDI -2.39% for example, are well placed to benefit from a backlash against plastic as well as growth in e-commerce. With their valuations bent out of shape by short-term worries, investors have an opportunity to pick the stocks up cheaply.

Plastic packaging is falling out of favor. Global brand manufacturers such as Nestlé andUnilever need new ways to wrap their goods that are less harmful to the environment. Paper packaging is more expensive, but recent legislation means that—in Europe at least—companies have no choice but to find alternatives to plastic. The European Parliament this year voted to ban single-use plastic such as straws and disposable cutlery by 2021 and wants the European Union’s 500 million citizens to use just 40 plastic shopping bags per head annually by 2025—less than half of today’s levels.

The movement is still relatively new and has yet to feed into packaging companies’ financial results. Yet they already are benefiting from a more established consumer trend: online shopping. Products ordered over the internet need 50% more packaging than those bought in a physical store. As the online share of overall retail sales increases, demand for e-commerce packaging will rise by 14% a year between now and 2022—almost five times faster than traditional packaging—according to industry data cited by British supplier DS Smith . 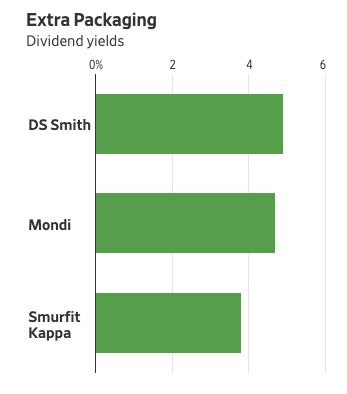 In theory, Mondi is the European packaging business that should get the largest boost from plastic’s downfall. The company already generates about one-fifth of its earnings before interest, taxes, depreciation and amortization from the specialty paper that goes into making paper shopping bags and commercial sacking, according to Jefferies estimates. Demand for kraft paper should grow by 4% a year until 2026, outstripping the overall global packaging market.

A gloomy short-term outlook means that little of this growth potential is priced into stocks for now. Slowing industrial and export activity—the traditional driver of packaging companies’ growth—is one factor. June industrial production data was poor in Germany, the eurozone’s biggest economy, and the protracted trade dispute between the U.S. and China threatens global exports. Nor is all well on the supply side: The packaging industry is dealing with a glut of containerboard, the material that is used to make cardboard boxes, which could put pressure on prices in the short term.

The valuations of Europe’s top listed players have been battered. Shares in Smurfit Kappa ,DS Smith and Mondi trade at between nine and 10 times their estimated earnings—a 20%-to-25% discount to their five-year averages.

Yet the businesses are highly cash generative and are increasing their payouts. At Mondi’s current depressed share price, its dividend yield is almost 5%. Investors are well paid to sit out the short-term slump and wait for the company to benefit from two powerful consumer trends.